Pakistan′s dams threaten mangroves and livelihoods | Asia | An in-depth look at news from across the continent | DW | 12.12.2018

Big dams and reservoirs in Pakistan are slowly depleting its lush mangroves. The destruction is also affecting local fishermen, who have to look for alternative sources of income. S. Khan reports from Karachi. Fifty-five-year old Mohammad Yaqoob is dejected. The fisherman lives in Pakistan's southern port city of Karachi and has five children. He has just returned from a fishing expedition with a meagre catch, not even enough to recover the money he spent on the boat and diesel.

But things were not always like this. Back in the day, Yaqoob's forefathers managed to catch tons of fish, shrimps and prawns. Now, a drop in the number of fish they can catch is forcing many fishermen in Karachi to give up their traditional profession and look for other means of livelihood.

This phenomenon is not confined to the largest city of Pakistan; other parts of Sindh province are also facing a drop in the numbers of fish, shrimp and prawns. Dildar Hussain Mallah, a fisherman from Dadu district, has already decided to keep his children away from fishing. There is not enough water in Indus River now, he tells DW, adding that several areas of the province that used to have plenty of water are dry now.

The two fishermen believe that it is God's will that has caused the reduction in water flow, but activists and experts say that the construction of dams and barrages is one of the biggest factors contributing to a reduction in sea life. 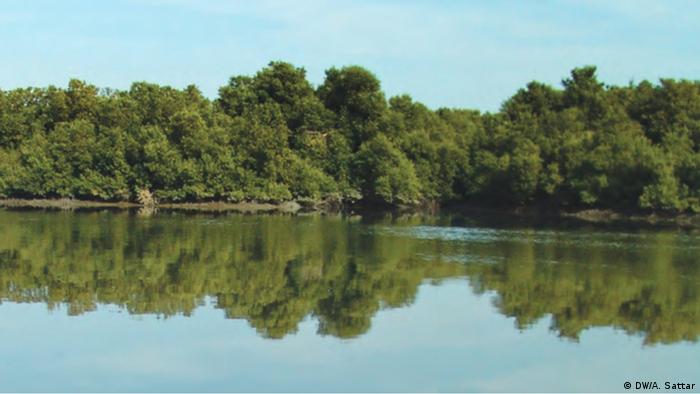 Pakistan's mangrove forests have depleted considerably in the last decades

Pakistan houses one of the largest canalization systems in the world, established by the British colonial administration in the early 1900s. Water is a crucial resource for the country, where  the per capita water availability is as low as 1,017 cubic meters a year, down from 5,269 cubic meters in 1951.

According to Saeed Baloch, secretary general of Pakistan Fisherfolk Forum (PFF), the construction of dams has wreaked havoc with the Indus Delta. "The release of fresh water into the sea is essential for mangroves that serve as nursery for fish, shrimp, prawns and several other species. But with the construction of dams and barrages, the flow of water has greatly reduced, causing the disappearance of mangroves," Baloch told DW.

"Seventy years ago they spread over 6,000 square kilometres, but now they have shrunk to only 860 square kilometers. The dumping of industrial and human waste is not only polluting the sea but damaging these forests as well," he added.

Additionally, as many as four million people associated with the fishing business in Pakistan are facing a threat to their livelihood because of the destruction of the Indus delta. But they are not the only ones to be affected by this phenomenon.

According to Mohammad Ali Shah, chairman of PFF, if more dams are constructed, then the mangroves will be destroyed completely, leaving cities like Karachi vulnerable to natural catastrophes. 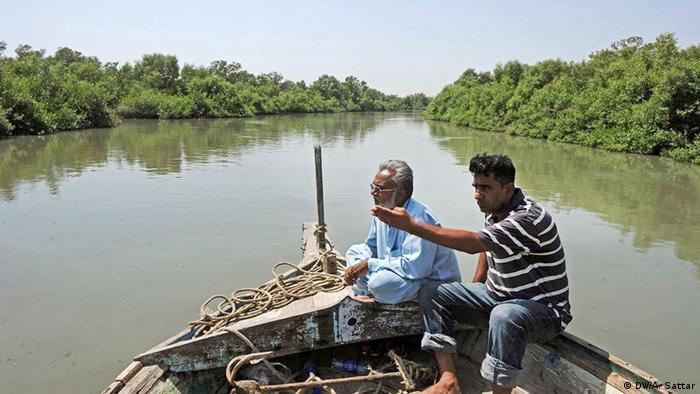 Fishermen must now look for other means of livelihood

The Sindh government insists it is taking the scarcity of water and damage to mangroves and delta very seriously. "We have recently inaugurated a sewage treatment plant in Karachi to treat sewage water that was being dumped into the sea without treatment earlier and damaging mangroves besides polluting the sea. More such plants would also be set up to save the sea from contamination, says Waqar Mehdi, special assistant to Sindh Chief Minister.

Mehdi admits that the reduced flow of water has caused immense damage to the coastal area of Sindh besides destroying agriculture land. "Three districts of Sindh have badly been affected because of the less flow of water. We are taking up this matter with the federal government and will not allow the construction of any dams that further reduces our share of water. We are also making efforts to ensure that adequate water is released into the delta and the chief minister has raised this issue at the federal level many times.”

But activists are skeptical about such promises. They think that the dam lobby is so powerful that it will somehow manage to build it, disregarding the interests of fishing community.

The construction of dams, however, has become a major policy priority for the new Pakistani government, headed by Prime Minister Imran Khan.

In September, Khan urged more than 9 million overseas Pakistanis to contribute to a dam fund. The campaign, which was initially launched by the Supreme Court's Chief Justice Saqib Nisar in July, has so far received little money in donations.

Chief Justice Nisar has warned dam critics that they could be charged with high treason for opposing the water project. Pakistan's media regulatory authority also issued a notification to TV channels that they must not criticize the dam funding drive.

A study by the World Commission on Dams found that large dams are not financially feasible. Many economic experts are of the view that Pakistan does not need mega dams to deal with its water shortage.

"Dams are not essential to addressing Pakistan's water problems. The government needs to balance the cost and benefits of big dams and should also look for other alternatives," Daanish Mustafa, a researcher in politics and environment at King's College, London, told DW.

Pakistan is among the Asian nations most affected by extreme weather events on account of global climate change. DW spoke to the Pakistani PM Imran Khan's adviser on climate change about the problems facing the country. (07.12.2018)

Pakistan has joined over 100 countries in ratifying the landmark pact, which holds countries to stricter greenhouse gas regulations. Almost 100 countries that negotiated the agreement have yet to ratify it. (11.11.2016)