The Saudi-led military coalition has admitted that one of its warplanes had "wrongly targeted" a funeral in Yemen, killing more than 140 people. A statement vows unspecified disciplinary action and promises compensation. 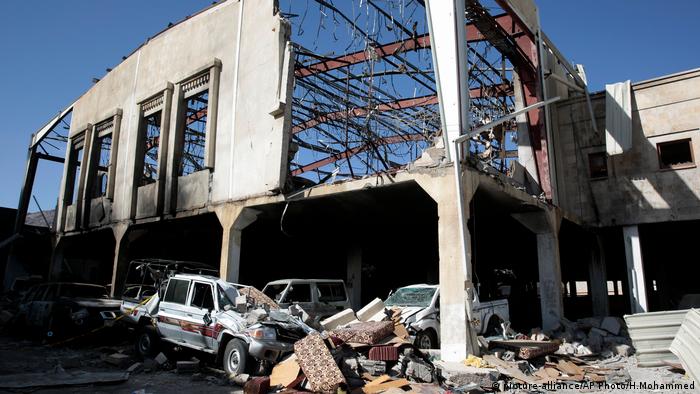 Britain says it plans to put forward a draft resolution at the UN Security Council calling for an immediate ceasefire in Yemen. The conflict in the impoverished Arab nation has escalated in recent months. (14.10.2016)

After US strikes Yemen, Houthis deny firing on ships

Yemeni rebels deny targeting a US ship in the Red Sea. The United States has supported the Saudi-led coalition, which has left much of the country in rubble after a year and a half of airstrikes. (13.10.2016)

Washington has ordered an "immediate review" of its support for the Saudi-led coalition in Yemen after a strike on a funeral in the capital killed more than 140 people. The UN is pushing for an independent probe. (09.10.2016)

US senators have rejected a resolution to block a weapons deal worth $1.15 billion (1.03 billion euros) to Saudi Arabia. Lawmakers are increasingly concerned about how the kingdom is flexing its military muscles. (22.09.2016)

Zeid Ra'ad Al Hussein says he wants an independent body to probe alleged grave human rights violations in the country. He says the suffering of Yemenis amid a civil war is "unbearable." (25.08.2016)

An investigation team with the Saudi-led coalition said Saturday that erroneous information, coupled with a failure to follow protocol, led to the lethal bombing of a packed funeral in the Yemeni capital, Sanaa, last weekend, which killed at least 140 people and wounded more than 600.

"Because of non-compliance with coalition rules of engagement and procedures, and the issuing of incorrect information, a coalition aircraft wrongly targeted the location, resulting in civilian deaths and injuries," the inquiry team said.

It remains unclear from the statement which party provided the false information. The Yemeni Chief of Staff is Maj. Gen. Mohammed Ali al-Maqdishi. And to date, the exiled Yemeni government in Riyadh led by President Abed Rabbo Mansour Hadi has made no public comment on the bombing of the funeral.

A rare mea culpa after denial and silence

The military coalition's statement represents an unusual admission of culpability by the Saudi-led campaign. Since March 2015, more than 6,700 people - the majority civilians - have been killed, leading to howls of protest from global rights groups and the United Nations.

But the deadly strike in Sanaa on October 8 earned a rebuke from even the United States, which has been quietly providing logistical support and intelligence - as well as arms - to Saudi Arabia and its Gulf allies in a campaign to drive Iran-aligned Houthi rebels from Yemen.

The coalition had initially denied responsibility but later expressed regret amid near-universal pressure and promised a probe of the "regrettable and painful" event. Saturday's statement, written in English, also called for compensation for the dead and wounded.

"Appropriate action... must be taken against those who caused the incident, and... compensation must be offered to the families of the victims." 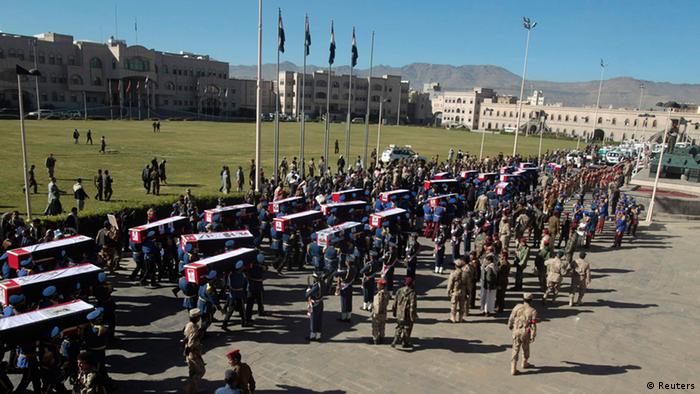 The Saudi-led coalition's bombing of the funeral was not the first attack on civilians by warplanes. Over the past year, busy markets, weddings, schools, and hospitals have been bombed, resulting in hundreds of deaths and thousands of injuries.

The United Kingdom, another key Saudi ally, is expected to present a draft resolution to the UN Security Council next week calling for an immediate ceasefire in Yemen; an earlier text condemning the funeral bombing was rejected by Russia as not strong enough. Following widespread demonstrations in Sanaa against Saudi Arabia and its allies, missiles from Yemeni territory were fired at US warships in the Persian Gulf. The US navy retaliated by destroying a cluster of radar installations, its first known direct strike in the conflict.

In a related development, Omani aircraft landed in the rebel-held Yemeni capital Saturday to evacuate 115 of the most seriously wounded from the funeral strike. Oman is the only Gulf Arab state that is not part of the anti-Houthi coalition and has previously organized evacuations of foreigners and victims of abductions in the country.