After US strikes Yemen, Houthis deny firing on ships

Yemeni rebels deny targeting a US ship in the Red Sea. The United States has supported the Saudi-led coalition, which has left much of the country in rubble after a year and a half of airstrikes. 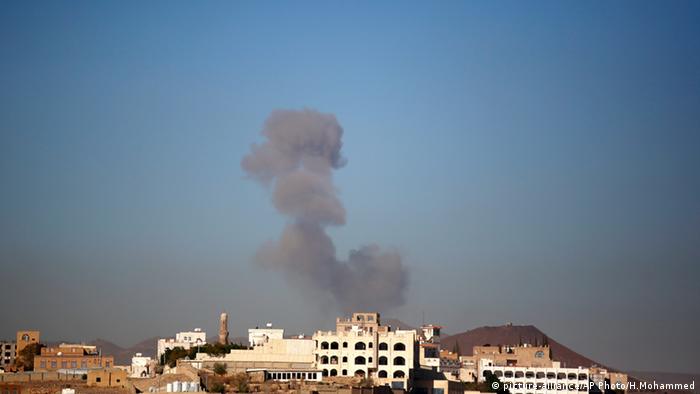 Houthis deny accusations that they fired missiles at a US destroyer off Yemen's coast. "Those claims are baseless," a rebel official told the Saba news agency.

The Pentagon claims that missiles fired from rebel territory landed in a strait where the USS Mason guided missile destroyer and USS Ponce transport dock were operating. Neither missile struck the ships or caused damage in the Bab al-Mandab Strait.

The United States has already retaliated, however, destroying rebel-controlled radar sites in attacks authorized by President Barack Obama on Wednesday.

Human Rights Watch has accused the Saudi-led coalition of an "apparent war crime" after it bombed a packed funeral in Sanaa on Saturday. In its damning report, HRW found that the bombing had killed a disproportionate number of civilians and that remnants of munitions found at the site of the attack showed that the United States had manufactured the explosives.

The coalition launched two airstrikes on the hall during Saturday's services for the father of the rebel interior minister, killing nearly 140 people and wounding at least 600. The coalition may have expected rebel leaders and security officials to attend the funeral.

The air campaign and ground fighting have killed over 4,000 civilians and wounded 7,000, and a coalition blockade has pushed Yemen to the brink of famine. Since the beginning of the coalition's intervention, rights groups have documented bombings that struck weddings, markets, schools, and hospitals.

HRW has called on the US and Britain to suspend their billions of dollars in arms sales to Saudi Arabia. The US faces pressure to drop support such as intelligence and air refueling for the coalition.

Rights groups have accused the US of being complicit in the destruction and humanitarian crisis in Yemen, causing the White House to announce that it would review its support for the Saudi-led coalition. In the wake of the funeral hall bombing, a US official publicly warned that the United States had not sent Saudi Arabia "a blank check."