Saudi Arabia's crown prince has pledged investment and counterterrorism support on his first visit to India. Mohammed bin Salman's visit comes amid tension in the subcontinent after last week's suicide attack in Kashmir. 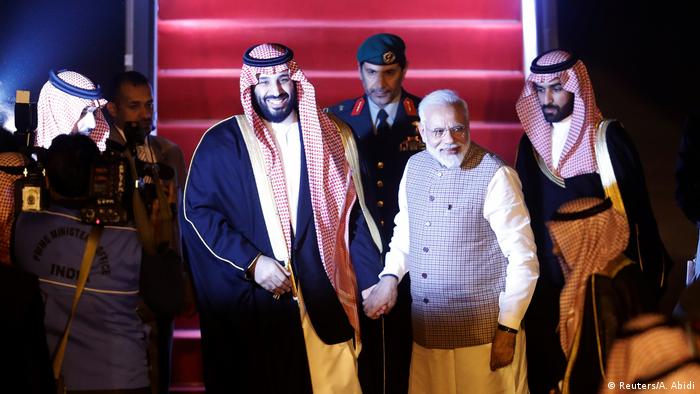 The pair announced on Wednesday that they had signed several agreements to boost bilateral investment, infrastructure, tourism, housing and communications. The crown prince voiced the potential for $100 billion (€88 billion) in investment and vowed to help counter terrorism and cybercrimes through enhanced cooperation.

Bin Salman said he regarded Indian people as Saudi Arabia’s "friends" and that the two countries had ties dating back centuries.

"Since we remember ourselves, we know Indian people as friends, and they are part of building Saudi Arabia in the past 70 years," he said, seemingly a reference to migrant labor in the Kingdom.

The visit to India has been hailed a "new chapter in bilateral relations" by the Indian Foreign Ministry. It comes just days after a suicide bomb attack in the disputed Kashmir territory left dozens of Indian paramilitary police dead.

India has blamed Pakistan for the attack, accusing Islamabad of supporting Kashmir rebels.

Bin Salman, who also visited neighboring Pakistan on the weekend, made no mention of the country in his pledge to help India fight terrorism.

But his office has indicated he was trying to assist in a diplomatic role to ease tensions between the nuclear-armed neighbors.

"Our objective is to try to de-escalate tensions between the two countries, neighboring countries, and to see if there is a path forward to resolving those differences peacefully," Saudi Foreign Affairs Minister Adel al-Jubeir said on Monday.

Pakistan has long been an ally of Saudi Arabia, and was criticized last year for attending an investment summit in Riyadh, boycotted by other world leaders over the killing of journalist Jamal Khashoggi.

Saudi Arabia has come under fire over several other issues, namely the country's human rights record  and its role in the conflict in Yemen.

The crown princes is scheduled to leave India for China on Wednesday night, where he is expected to announce further cooperation on Beijing's Belt and Road infrastructure developmentinitiative.

Saudi Arabia is India's main supplier of crude oil, and ties are being extended beyond energy to build a strategic partnership, India's Foreign Ministry said last week. Bilateral trade is already worth $28 billion.

Saudi Aramco's investments also include plans to help build the $44 billion Ratnagiri Refinery, which would become the largest single location refinery complex in the world.

The crown prince on his earlier stop in Pakistan also signed $20 billion in deals, half of this going to an oil refinery in the country's southwest.

The southern Indian state of Kerala is one of the biggest exporters of low-skilled labor to the Gulf region. The downturn in S Arabia has seen many workers returning - with harrowing stories and worries about the future. (19.08.2016)

Prime Minister Narendra Modi is on a visit to Saudi Arabia hoping to secure trade ties as Indian demand for oil booms. The PM also sought to talk security for the millions of Indian expatriates working in the kingdom. (03.04.2016)

Airbus Chief Executive Tom Enders has said Germany's policy of blocking weapons sales with German components to Saudi Arabia is divisive. He warned that "German-free" product lines might need to be developed. (16.02.2019)