Saudi slowdown spells uncertain future for India′s migrant workers | Asia| An in-depth look at news from across the continent | DW | 19.08.2016

The southern Indian state of Kerala is one of the biggest exporters of low-skilled labor to the Gulf region. The downturn in S Arabia has seen many workers returning - with harrowing stories and worries about the future.

Abu Sahuman Naushad labored under the scorching midday sun in Thiruvananthapuram in the southern Indian state of Kerala, mixing cement to make moulds for a local well-maker.

Sweat dripped down his bare back as the mason moved expertly, pouring the mixture and patting it down with a spade. "This is child's play," the 42-year-old laughed when asked if he was tired. "You should have seen me working in Saudi Arabia. That was torture."

Like millions of Indians laborers who head to the Gulf region in search of well-paying jobs, Naushad also took a bank loan of about 2,000 euros by pawning his wife's gold jewelry and placed his faith in a recruitment agent who promised him a job in the construction sector in Saudi Arabia eight years ago.

When he reached Riyadh, Naushad was instead taken to a private farm where he was put to work harvesting vegetables, spraying pesticides, building walls, ploughing, sowing and watering crops, cooking and any other job that needed to be done. 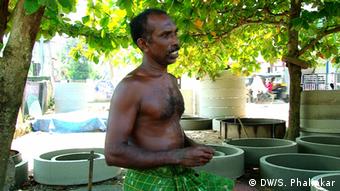 'You should have seen me working in Saudi Arabia. That was torture,' says Naushad

It was 12 hours of backbreaking work every day, no weekends and no holidays. He was housed in a tiny camp along with nine other workers from Bangladesh and Pakistan. His promised salary of 800 Saudi Riyals (188 euros) was whittled down to 600 after his agent got his cut. Naushad was frequently sick, the pesticides led to skin infections; he developed joint pain.

"It was hell. We were imprisoned because my employer confiscated my passport," Naushad told DW. "There was no way I could get out of there even if I wanted to."

The tipping point for Naushad came when his employer failed to inform him of his mother's illness.

"My employer heard from my family that my mother was dying of cancer but he didn't tell me because he didn't want me to stop working," Naushad recalled. "When I found out, I wanted to go home right away. But I couldn't afford the plane ticket. My employer refused to help. My mother finally died in India and I couldn't be there with her - it was the worst time of my life."

Naushad stopped eating and went on a hunger strike. His employer locked him in his room for days and finally caved in to his demand - to let him go back to India. He signed the papers that would let Naushad obtain an exit visa - a requirement under Saudi law - and leave the country.

Almost a tenth of Kerala's population lives in the Gulf States and in Europe. While highly skilled graduates leave to seek lucrative jobs elsewhere, many poor families depend on remittances from abroad - at a high price. (11.04.2012)

Naushad's tale isn't an uncommon one as the once booming oil-rich Saudi economy sputters, leaving thousands of workers, especially in the construction sector, in doldrums. It has thrown a spotlight on the often harsh working conditions that migrants - who largely work in blue collar jobs as laborers, masons, crane operators, drivers and fitters - have to grapple with.

Saudi Arabia is home to three million Indian workers and the Indian government has moved in recent weeks to evacuate many who have been stranded in labor camps after being laid off by companies hard hit by the Saudi government's spending cuts because of sliding oil prices.

Many, like Naushad, are returning home. Ismail Badusha came back to Kerala a year ago. He left to work in the Gulf when he was 18, moving from Oman and Abu Dhabi to Saudi Arabia, working on oil rigs, cutting fiber glass sheets and doing clerical work.

But, Badusha's employer, a construction company, began feeling the squeeze too.

"The work conditions became increasingly worse. My employer began cutting my salary. I sometimes didn't get paid at all," the 59-year-old said. "My colleagues were laid off. I was made to work 13 to 14 hours a day, seven days a week. It was unbearable. I finally decided to come back."

Despite the tough conditions, Badusha and Naushad used to send their hard-earned Gulf money home to their families in Kerala - helping to educate their children, pay for household expenses, pay off loans, and help a relative start a business.

Over 2.5 million workers from Kerala have already migrated abroad, most of them to Gulf nations. Remittances from there are a crucial pillar of Kerala's economy, accounting for some 36 percent of the state's GDP. 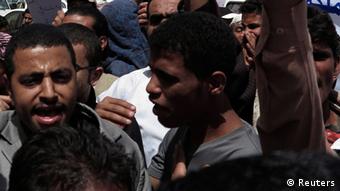 S. Irudaya Rajan, an expert on migration at the Centre for Developing Studies in Thiruvananthapuram, says any major disruption of the flow of remittances to Kerala could spell big trouble for the southern state.

"Remittances are the biggest engine for growth in Kerala," Rajan told DW. "If it stops, or even it goes slowly the way it is going, it will have lots of implications for Kerala's economy, society and families."

There are implications for Naushad too. While he's happier being back with his family in Kerala, he simply doesn't make enough here to pay back his bank loan and get his daughter married.

"I am very worried about the future. I don't think I can stomach the idea of going back to the Gulf after my experience in Saudi Arabia," he said. "But I just may be forced to. I feel trapped."