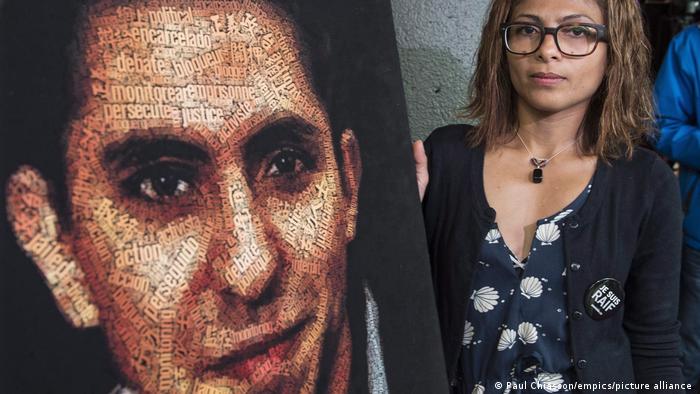 Blogger Raif Badawi has been released after spending 10 years in a Saudi prison, his wife Ensaf Haidar said on Friday.

Badawi, now 38, is a founder of a Free Saudi Liberals website, a forum aimed at fostering debate about his native Saudi Arabia and discuss the separation of religion and the state. He was detained in 2012, and eventually sentenced to 10 years in prison for "insulting Islam," cybercrime and disobeying his father, which is a crime in the conservative kingdom.

He was also sentenced to 1,000 lashes and fined 1 million Saudi riyals (€224,000/$266,000). He was publicly flogged in 2015, receiving 50 lashes, but further lashings were suspended following international outcry. The country eventually banned flogging as a punishment in 2020. Badawi's prison term expired in February.

The blogger's sister, Samar Badawi, was detained in July 2018 on suspicion of harming state interests. She was released in 2021.

Barred from leaving the country

Raif Badawi's fate became a symbol of oppression in Saudi Arabia. His wife Ensaf Haidar lead an international campaign for his release, with many activists and organizations across the world joining the effort. Haidar has been granted political asylum in Canada, where she now lives with their three children. The four are now Canadian citizens.

"Raif called me. He is free," his wife Haidar told the AFP news agency on Friday.

One of his daughters, Nawja Badawi, told the agency she can hardly believe the news.

It was not clear when and how the blogger would be reunited with his family, however, as Badawi will likely be banned from leaving the his native country for another decade.

Ensaf Haidar: 'I will continue to fight for Raif and for free expression' (2019)

Speaking to DW ahead of Badawi's release, she said that Saudi society was changing.

"Everything that Raif and I wished for the country [Saudi Arabia] is coming to fruition," she said. Saudi Arabia's royal rulers "are working for more openness," she added. "More freedom for women, access to non-religious studies for them, allowing them to drive and many other things."

She also said the blogger was not aware of the widespread support he enjoys across the world.

"He does not have internet access," she told DW. "He calls me when he can from the public phone booth of the prison. We have so little time, we talk about the children and about life."

The dissident has faced health problems and mental health crisis during his imprisonment, according to his wife.

Badawi has been awarded a number of international prizes during his imprisonment, including the European Union's Sakharov Prize for Freedom of Thought in 2015 and the DW Freedom of Speech award the same year.

Opinion: Raif Badawi is free, but world must speak out for other jailed journalists