Hopes are high that Saudi writer Raif Badawi may be released from jail within the week.

Badawi has spent almost ten years behind bars for publishing a blog called Free Saudi Liberals. He was arrested in June 2012 and sentenced to a decade in prison in 2014, as well as a $266,000 fine and 1,000 lashes for "insulting Islam" because he had discussed the separation of religion and state in Saudi politics on his blog.

Badawi was sentenced using the Islamic — or hijri — calendar. By that calendar's reckoning, on Rajab 26 1443 he will have spent ten years in jail. This date translates to February 28.

Human rights group Amnesty International told German news agency dpa that they believed Badawi could be free by March 1. The group has campaigned for his release for years, along with other organizations such as Human Rights Watch and Reporters Without Borders.

Badawi is one of Saudi Arabia's most high profile political prisoners. While imprisoned, Badawi, who turned 38 in January, has been awarded a number of international prizes, including the European Union's Sakharov Prize for Freedom of Thought in 2015 and the DW Freedom of Speech award the same year.

Badawi's wife, Ensaf Haidar, who now lives in Canada with the couple's three children, told DW she believes that, as Saudi Arabia has been opening up more, the time is right for her husband to be freed.

"Everything that Raif and I wished for the country [Saudi Arabia] is coming to fruition," she said. Saudi Arabia's royal rulers "are working for more openness," she added. "More freedom for women, access to non-religious studies for them, allowing them to drive and many other things." 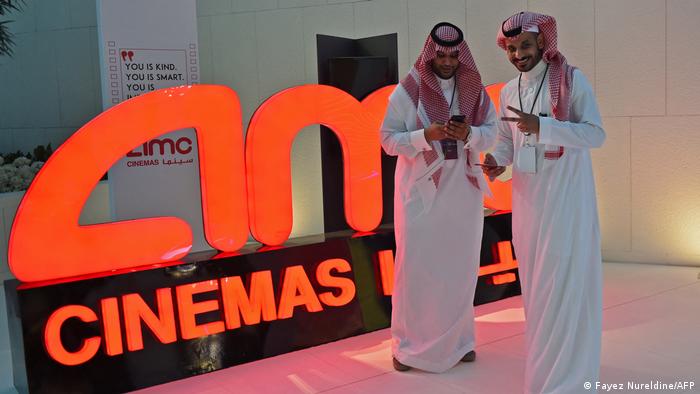 In 2018, one of Saudi Arabia's reforms was lifting the ban on public movie theatres

Many of the more recent reforms in Saudi Arabia are part of the so-called Vision 2030, a wide-ranging set of socio-economic reforms first proposed in 2016 by Saudi Crown Prince Mohammed bin Salman, in an effort to make his country more modern, liberal, not to mention business and tourism friendly.

Other significant changes since 2016 have involved lifting a decades-long ban on cinemas as well as the ongoing, gradual relaxation of gender segregation rules. The role that the country's religious police play has also been reduced. One of the allegations Badawi faced was speaking ill of the religious police.

In 2020, as part of this liberalization, Saudi Arabia also abolished flogging as a punishment. Badawi was lashed publicly 50 times in 2015 outside a local mosque in Jeddah, but international pressure resulted in the suspension of the rest of that part of the sentence. The 2020 abolition saved him from having to endure the remaining 950 lashes. 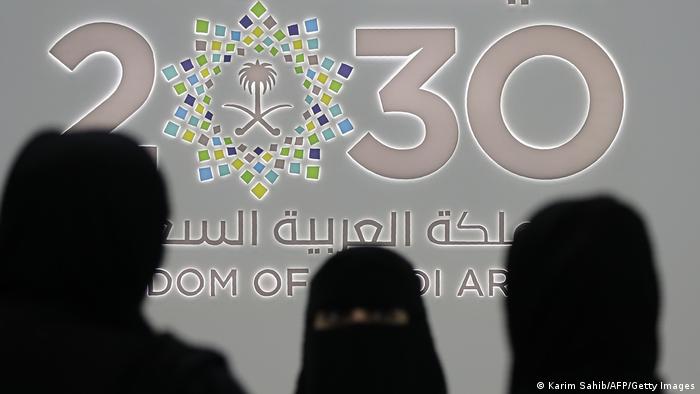 Despite its efforts at modernization, Saudi Arabia still faces criticism, among other things for being a world leader in executions

"We trust that Saudi Arabia will honor the decisions of its own legal system," argued Silver, who also serves as director of policy and projects at the Montreal, Canada-based Raoul Wallenberg Center for Human Rights. "It is not only the right thing to do, according to Saudi law and custom, but the smart thing to do, in order to shift international opinion."

Despite the recent reforms, Saudi Arabia continues to be criticized for its human rights record.

Haidar and her children, who sought asylum in Canada in 2013 and live in Quebec, have started a countdown on Twitter.

Badawi's children last saw their father when the eldest daughter, Najwa, was seven. She's now 18 and has spoken on behalf of her father at international events.

Badawi, however, remains unaware of the widespread support his case enjoys, Haidar explained. "He does not have internet access," she told DW. "He calls me when he can from the public phone booth of the prison. We have so little time, we talk about the children and about life."

Should Badawi be released soon, his life in Saudi Arabia would be far from easy. The financial fine is still pending and he not only faces a media ban, but a ten-year travel ban as well. So he would not be able to leave the country to reunite with his wife and children.

To overcome this, attempts are ongoing to make Badawi a Canadian citizen, just like his wife and children. In January 2021, Canadian politicians supported a motion in the country's federal parliament asking that Badawi be granted citizenship. 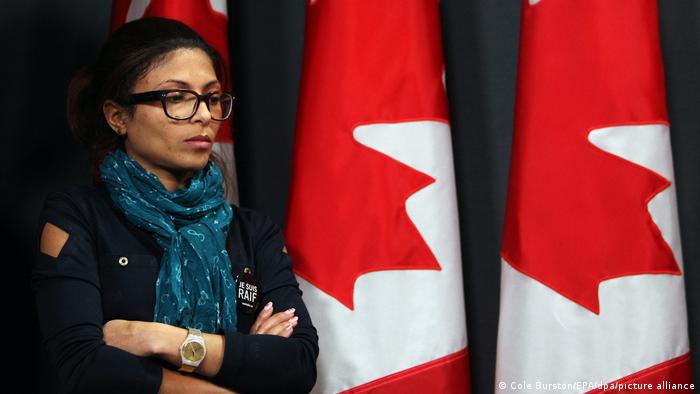 Raif Badawi's wife, Ensaf Haidar, has been advocating for Canadian citizenship for her husband

Canada's laws allow its immigration minister discretion to grant citizenship in special circumstances "in order to remedy a particular situation and unusual distress."

But over a year later, there has been no further progress. Canadian media have reported that sources inside the federal government believe citizenship might actually make things worse for Badawi.

Relations between the two countries have been strained ever since Canada's former minister of foreign affairs, Chrystia Freeland, called for the release of Saudi political prisoners in 2018. That included Badawi and his sister, Samar, a women's rights activist who was arrested in 2018, as well as Badawi's brother-in-law, Waleed Abulkhair, who acted as his lawyer.

In January, a former Canadian ambassador to Saudi Arabia, Dennis Horak, told local newspaper The Globe and Mail, he believed the chances of Badawi being released on February 28 were only around 50%. And although citizenship would mean he could get more help from Canadian diplomats, experts have also noted that the Saudis don't recognize dual citizenship anyway.

Nonetheless, Haidar is not giving up. "We are still waiting," Haidar said of the possibility of Canadian citizenship.

What would be better though, is if the Saudi government revoked the travel ban, she added. "We hope that he will receive a travel document allowing him to come to Canada as soon as he is released," she told DW. "I also hope that all the governments that have defended Raif — the European Union, Germany, Austria, the United States — will unite to supervise his release so that he can join us in Quebec. His friends, his children and I are looking forward to it."

Saudi blogger Raif Badawi has been in prison for more than a year. For nearly just as long activists have organized campaigns in his name. Hashtags like #FreeRaif have soared on Twitter, but what has been the impact?

From Badawi to Khashoggi: Freedom of speech in Saudi Arabia

The face of imprisoned blogger Raif Badawi is a symbol of Saudi Arabia's repression of free speech. His iconic image has now been joined by others who have been imprisoned — even murdered — for expressing their views.

Senior officials from the US and EU are visiting Saudi Arabia again, and business deals are being done. Human rights activists say the Saudis have literally gotten away with murder, as well as other abuses.