Russia′s devout push back against coronavirus church closures | Europe | News and current affairs from around the continent | DW | 17.04.2020

Moscow churches have been closed to worshippers during Orthodox Easter celebrations to slow the spread of COVID-19. Though many churches across Russia will stay open, for some the move crosses a line.

The floors at the Church of St. Tatiana have been meticulously mopped ahead of this Holy Thursday service. But in the runup to Orthodox Easter, only the priests' feet will be pacing over the wood in prayer. Masking tape markings on the floor were supposed to indicate where worshippers should stand, to keep them at a safe distance from each other, as the number of coronavirus cases rise in Russia. Now the tape merely cuts lines into emptiness.

The church in the center of Moscow can house around 1,000 people at full capacity. Instead, the service is being streamed live on YouTube. A computer and a camera on a tripod light up along with the gold icons.

Read more: Coronavirus in Russia: Self-isolate or face the consequences

Moscow's strict self-isolation measures have stopped many people from coming to church. More than half of Russia's coronavirus infections are in the capital, and people are only allowed to leave their homes for essential work, to go to the supermarket or to walk their dog within 100 meters (about 330 feet) of where they live.

The handful of worshippers who did decide to risk coming to St. Tatiana's on Palm Sunday — April 12 this year for the Orthodox church — didn't know this would be the last Easter service they could attend. Afterward, Father Superior Vladimir Vigilyansky gathered his congregation to tell them he had received orders to close the church to worshippers for the rest of Holy Week, including for Orthodox Easter on April 19.

Overnight, Bishop Dionisy, a top official in the Russian Orthodox Church, had sent a letter to parishes around the capital, after receiving an order from Moscow's chief health officer. The bishop instructed priests to tell parishioners about the new rules and "console them with a fatherly word."

But Father Vladimir's words contained more than a hint of anger toward the authorities. "What can we do? We are obliged to thank God for everything," he says, removing his glasses and clutching a cross, while arguing that authorities don't trust the church to keep worshippers from infection.

"If there is such a humiliating attitude toward the church and its congregation, then that's nothing new for us. We have suffered worse persecution in the 20th century, when at least 100,000 clergymen were killed. Killed, shot, put in gulags. We got through that," he says, referring to Stalin's Great Terror in the 1930s, and more generally to the persecution of clergy members in the Soviet Union.

Too close for comfort?

At the end of March, Patriarch Kirill, the head of the Russian Orthodox Church, joined authorities in calling for believers to stay home and pray. Earlier, the church also issued recommendations to parishes on how to prevent the spread of COVID-19, including by disinfecting icons and using disposable cups and spoons for communion. But according to reports by RBC, a business daily, most churches in Russia will be staying open for Easter.

About 60% of Russia's 144 million people consider themselves Orthodox Christians, though only 13% go to church at least once a month. Still, Orthodox Christianity is sometimes seen as part of Russia's state ideology, as the country becomes increasingly socially conservative under President Vladimir Putin. Putin himself is regularly shown attending key religious services and braving ice-cold water to take a shirtless Epiphany dip. The president's recently proposed changes to the Russian constitution will add a mention of God and stipulate that marriage should be between a man and a woman.

But the coronavirus has exposed some underlying fault lines in the relationship between the government and the church. Though most priests have echoed the patriarch's calls to pray at home, clergy members around Russia have clashed with authorities. In late March, Archpriest Andrey Tkachev went so far as to begin a sermon at his church in the Moscow region in a gas mask. He mockingly told the congregation that if only people turned off their televisions, concerns about COVID-19 would disappear, too.

As health authorities in the northern republic of Komi closed churches to worshippers until the end of the month, the archbishop there called their actions "unconstitutional" and threatened legal action. In the Urals, the Yekaterinburg Archdiocese also clashed with local officials over their social media posts telling worshippers to stay at home. 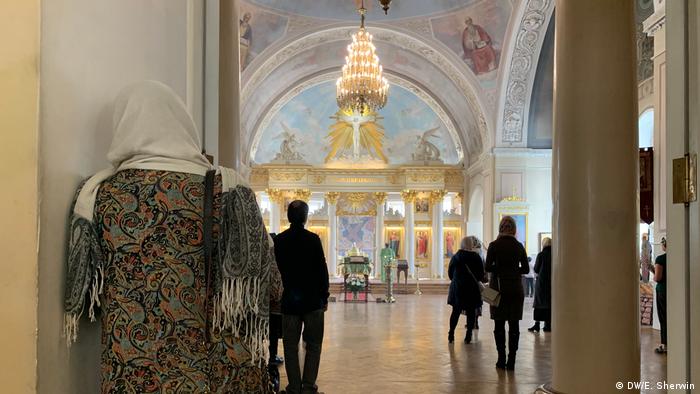 Back at the Church of St. Tatiana in Moscow, Father Vladimir accuses the local government of overreach, pointing out that the Russian constitution dictates a separation of church and state. He says authorities are using their power selectively, barring people from going to church but allowing them to shop at huge supermarkets "because that is about the economy."

"If the authorities did the same thing for all the groups of the population, I would understand. But the rules don't apply to everyone," he says. On Wednesday, the city of Moscow introduced a system of electronic passes for journeys by car and by public transportation. Public officials, military personnel and security guards, are among the groups who are exempt from the restrictions — but not clergy members.

Many of the congregants at the church are also crestfallen at having to stay home for Holy Week and Easter. "For Orthodox Christians this is the most important week," one young woman says quietly. "I don't know what to say because you aren't supposed to condemn anyone," a man with a graying beard says, nodding sadly. "But there can't be any comparison between an apartment and a church."

But some at the church see this difficult situation as an opportunity. Long-time congregation member Mikhail Eremin has been in charge of streaming church services online since early April.

Eremin says he expects people in Russia to come flooding back into churches once COVID-19 restrictions are lifted. But he also believes traditional church institutions will be able to reach out to more people via the internet.

"During self-isolation, when people are at home, that is the perfect time to develop all sorts of media projects. YouTube channels, websites, Instagram channels and so on. It's an opportunity to attract new people and talk to them," he says.

Churches, synagogues and mosques are closed during this month's Christian, Jewish and Islamic holidays because of the coronavirus pandemic. The closures offer an opportunity for believers, DW's Christoph Strack writes. (09.04.2020)

In his response to the coronavirus crisis, President Vladimir Putin has announced that Russians should stay home on paid leave. But so far it's small businesses who are paying the price — creating a sense of injustice. (03.04.2020)