Russian politician Alexei Navalny was hospitalized for an alleged alergic reaction, but his long-time doctor believes he was harmed by "chemical substances." The activist was in jail when his health deteriorated. 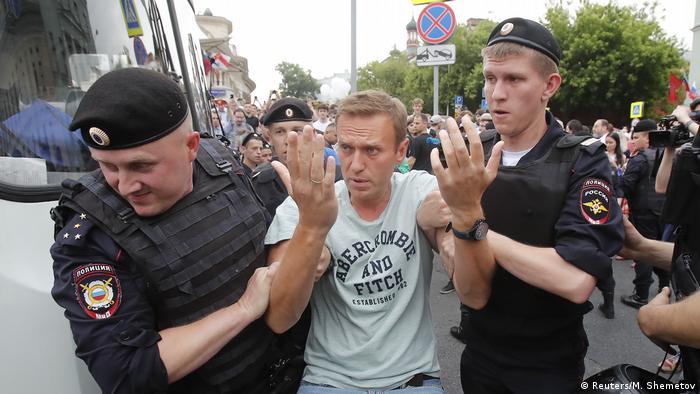 The liberal activist suffered "severe swelling of the face and skin redness" and was hospitalized on Sunday, his spokeswoman, Kira Yarmysh, wrote on Twitter. Navalny was in jail serving a 30-day-sentence for calling for an unauthorized protest march.

Navalny's lawyer, Olga Mihailova, pointed that the 43-year-old activist consumed the same food and drink as five other people in his cell, and "they are doing fine."

Yarmysh said it was unclear what caused the allergic reaction, as Navalny had never suffered from such reactions in the past.

"He is currently in the ward under the supervision of police officers. He is being provided with the necessary medical assistance," she wrote.

Navalny's long-time doctor, Anastasy Vasilyeva, said she was prevented from treating the politician after arriving at the Moscow hospital where Navanly is being kept. In a Facebook post, the doctor described the hospital visit as a "real circus."

Both Vasilyeva and Mihailova said the medical chief of the hospital, Olga Sharapova, was a lawmaker for the ruling United Russia party.

The ophthalmologist said her and a colleague, also a long-time doctor of Navalny, were escorted out of his room "almost immediately" after arriving.

"Still, we managed to observe our patient through the door (honestly – it's truly absurd), and to note his complaints and medical history," she wrote.

According to Vasilyeva, Navalny's symptoms correspond to severe toxic inflammation of cornea and the eye membrane, conjunctiva. He also seems to suffer from dermatitis and skin lesions.

She added she can "confidently" say that Navalny's health issues are due to the "harmful effect of unknown chemical substances."

"Alexei doesn't have allergies, and he had never had them," she said.

Vasilyeva, who treated Navalny after an attacker hurt his eye by pouring chemicals on his face in 2017, said the opposition leader has not been properly checked by an ophthalmologist.

"Right now there is a lot of fear for his injured right eye, which was really only saved with major effort," she wrote.

The case is reminiscent of an alleged poisoning of Pussy Riot activist Pyotr Verzilov. The 31-year-old, who is a dual Russian-Canadian national, was hospitalized in Moscow after temporarily losing his eyesight and ability to speak. He was eventually transported to Berlin for treatment.

In an interview to DW, Verzilov said he had been poisoned and described it as a "warning sign" sent by his opponents in the Kremlin.

Earlier this week, Navalny posted an Instagram video saying the police picked him up outside his Moscow apartment as he left to go jogging.

This is only the latest of Navalny's run-ins with Russian authorities, following repeated arrests and court cases in recent years. Last year, European Court of Human Rights ruled that Russia's arrests and detention of Navalny in 2012 and 2014 were politically motivated and breached his human rights. Moscow rejected the verdict.

Around 3,500 people took to the streets, according to media reports, in a demonstration that lasted more than seven hours.

The online civil rights blog OWD-Info spoke of a total of 1,370 arrests; however, Moscow police were quoted as saying that 1,074 people were held "for a variety of offences."

Sergey Dik, a journalist working in DW's Russian desk, was briefly arrested while covering the demonstration.

EU foreign affairs chief Federica Mogherini criticized authorities in Moscow for the "disproportionate use of force against peaceful protests."