Despite the many conflicts between Moscow and Brussels, Russians appear to appreciate relations with the European Union. Many can even imagine becoming a member. Those are some of the results of a Deutsche Welle survey. 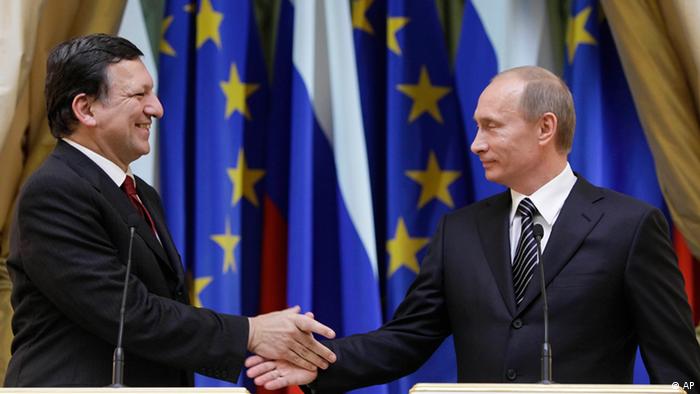 Sixty percent of Russian citizens - and seventy-two percent of 18 to 29-year-olds - view the European Union as an important economic and strategic partner for their country.

Those are some of the results of the DW trend survey for the month of June, which was conducted directly after the EU-Russia summit came to end in Yekaterinburg. The meeting was overshadowed by differences in opinion, particularly concerning the conflict in Syria. Russian authorities' treatment of non-governmental organizations has also caused friction between Brussels and Moscow. 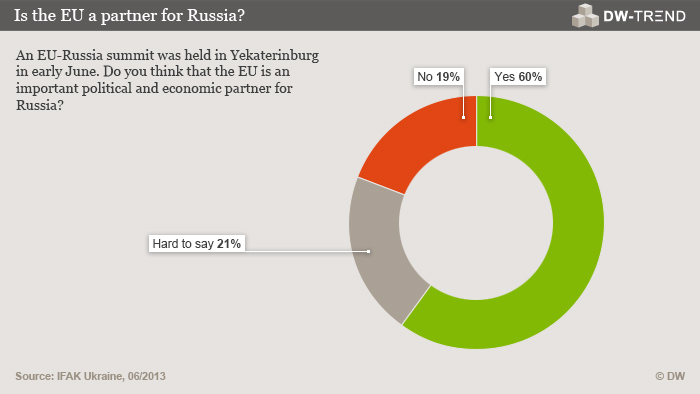 But those tensions do not appear to affect Russians' personal attitudes toward the EU. Forty-one percent of those polled said Russia should become a member of the EU. Nearly one in three people (30 percent) believe that should even occur within the next five years. At the same time, 40 percent reject such a membership. These figures have hardly changed since the last survey in November 2012. But a negative trend, which had been developing over the past two years, has been nipped in the bud: when the percentage of people against accession to the EU rose from 18 percent in December 2010 to 41 percent in November 2012. 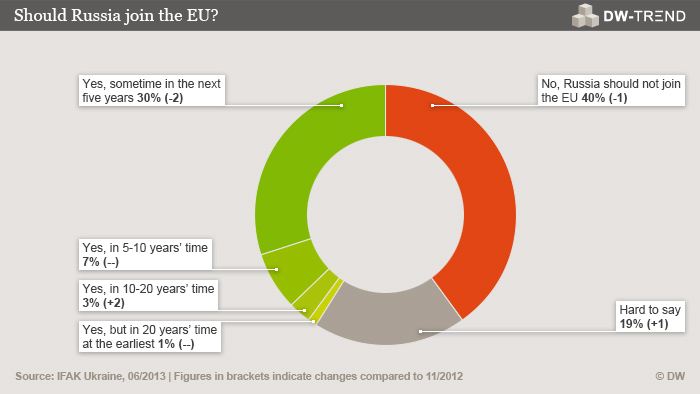 The Russian-European relationship is meanwhile viewed positively again: ten percent of those surveyed consider relations friendly, and 47 percent see them as cooperative. Only around one in ten (11 percent) see the relations as strained.

The Russian-German relationship is viewed even more positively. Despite serious political conflicts, which nearly led to an altercation between German Chancellor Angela Merkel and Russia President Vladimir Putin at the end of June in St. Petersburg, 44 percent of Russians view the relations as cooperative, while 23 percent see them as friendly. Only five percent see them as tense.

In November 2012, 18 percent viewed relations as tense or even hostile. The German government's open and repeated criticism of the restrictions on expressing one's opinion and the human rights situation in Russia seems not to have had a long-term effect on the overall positive attitude of Russian citizens toward Germany and the European Union. 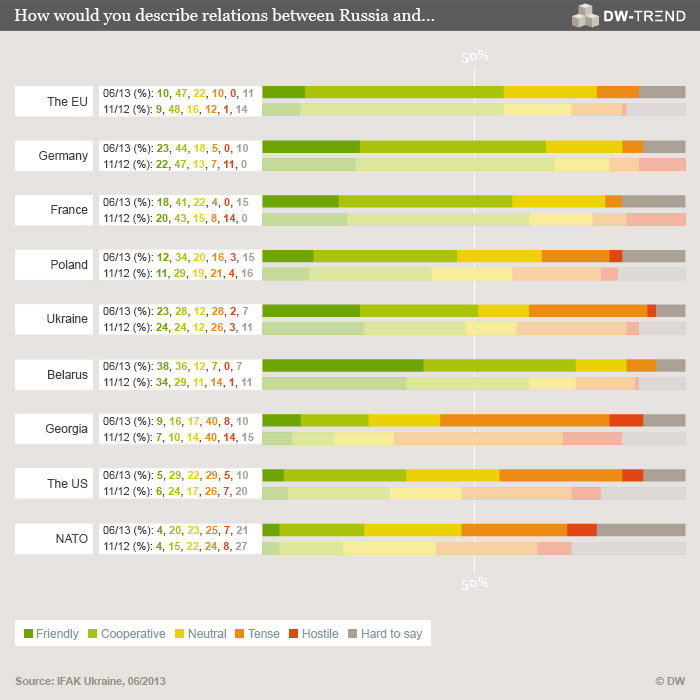 In response to the question about the EU's most important goals, 51 percent of those Russians polled named economic growth. Twenty-six percent said the EU's territorial expansion was its most important goal, while an additional 25 percent named the assertion of European interests in the world as the EU's prime aim. More than one answer was permitted.

The number of those who have no differentiated opinion about which goal of the EU they would support has risen, however. It's grown from 17 percent in November 2012, to 26 percent now. That could also mean that many Russians are uncertain about which goals the EU has defined for itself. The economic crisis in the eurozone has apparently sparked doubt about the EU's mission and perhaps even about its competence among Russians. 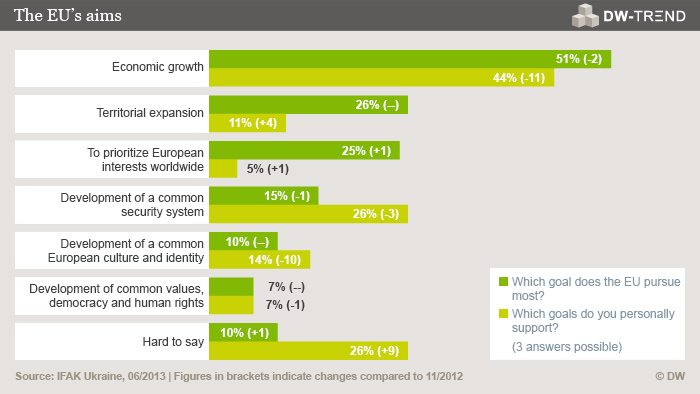 The Ukraine-based public opinion research institute IFAK conducted the DW trend poll, as commissioned by Deutsche Welle's Russian Department. One thousand citizens between the ages of 18 and 65 living in Russian cities of more than 50,000 people were contacted by telephone in the survey.

A majority of Ukrainians are in favor of their country joining the EU. The planned association agreement with Brussels is creating expectations beyond the economic benefits, according to the latest DW-Trend. (03.07.2013)