Russians are embracing their role as hosts for jubilent soccer fans. While some commentators say the international guests will help dispel Western media myths, others argue the exchange could undermine Kremlin control. 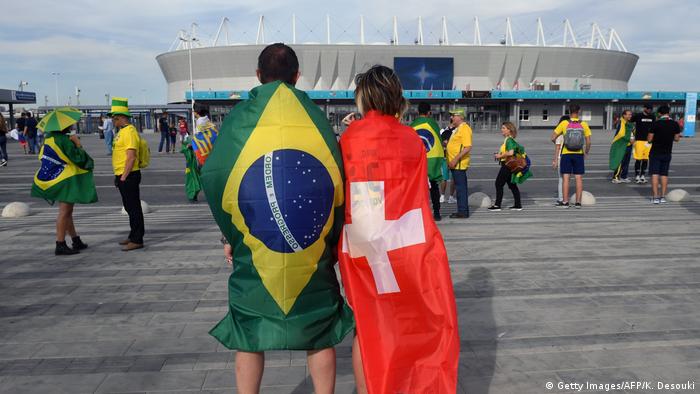 Up to one million people are expected to visit Russia before the end of 2018 FIFA World Cup, and hundreds of thousands of fans have already flocked to Moscow and the ten other cities hosting the matches.

Russian authorities have gone a long way to present the country in the best light possible, instructing police to smile, removing stray dogs, and even reportedly renovating holding cells and equipping them with TVs so any detained troublemakers could still keep up with the tournament.

Meanwhile, ordinary Russians seem eager to make their visitors feel welcome. Many of them go to fan zones to talk, celebrate and party with foreign visitors. According to Russian media, this mass-scale contact between Russia and the rest of the world could have far-reaching consequences after years of propaganda from all sides.

Both good and bad

"Well then, ole. Ole-ole-ole," writes columnist Irina Pertrovskaya in the government-critical Novaya Gazeta. "Soccer madness (both in the good and the not-so-good sense of the word) is at a fever pitch."

"The good meaning of it is that, apparently, this gloomy and semi-isolated country, after many years of television urging it to hate foreigners and be proud of God knows what, is fawning over this soccer holiday and the possibility of walking together with exotic 'newcomers' on city streets," Pertrovskaya says.

"The not-so-good meaning is that this same television is now going into patriotic hysteria, especially on those days when the Russian national team is playing. All that shouting 'Go, Russia' during broadcasts day and night makes your ears ring."

Economist Igor Nikolayev also thinks that "one of the brightest impressions of this event are the foreign fans and their positive energy, their wonderful relationship to the country hosting the cup, to Russians" — and this despite misconceptions of Russia served to the foreigners by their own media.

In a blog entry for independent radio Echo Moskvy, Nikolayev says that these foreigners' cheerful goodwill undermines the Russian government's rallying cry that the country is a "fortress under siege," and that Russia's "enemies [are] everywhere, both within and abroad ... and that is why we need to rally around the government, which is pushing against the enemies with all its might."

Regarding the masses of good-spirited foreign soccer fans traveling to Russia, Nikolayev writes: "We are supposed to believe that those people are representatives of countries who want to harm Russia? Nonsense. Then why should we lock ourselves up in this 'fortress' that nobody is about to besiege?"

"No, nobody is besieging us. We can see it and know it. If you have your doubts, go along to Moscow's Nikolskaya Street, the most intense fan-zone of the championship. Go on, you won't regret it."

According to Nikolayev, it "feels like the government miscalculated this soccer thing" by vying to organize the cup.

Writing for the Kommersant Daily, a liberal business newspaper, Andrei Percev comments on the atmosphere of freedom and relaxation brought about by the World Cup. Friendly attitudes by the police and the authorities give people a glimpse of a different Russia, he says.

"It's natural to have the police help stranded people, instead of grabbing them and taking them downtown," Percev writes. "Wearing flamboyant and extravagant clothing is also normal and natural. It's natural not to have intrusive fences around the city."

Russians' enthusiasm for this newfound leniency is "the starkest testimony that we really don't have enough freedom," he says.

Harder to lie about Russia

The World Cup also prompts foreign visitors to dismiss their stereotypes about Russia, according to Russian political scientist and writer Alexei Muhin.

"In recent years, Western media has created a distinct image of Russia, like a reflection in a distorted mirror," he sys in an interview for the pro-government newspaper Pravda. "Some of the tourists who are now coming to the World Cup are surprised and asking why there is no snow, no bears in the streets, and so on."

"As a matter of fact, this enormous number of visitors is going to do a major service to changing the world's perception of Russia," the pro-Kremlin publicist adds. "Now, the Western media is going to find it very difficult to lie to its citizens because part of them, a very decent part, traveled to Russia and saw it all for themselves."

'Don't leave us alone over here'

"Dear god, we are a part of the world," says documentary filmmaker Yulia Melamed in her column for the government-critical Gazeta.ru. "It turns out, we are sane, everyone loves us, we love everyone."

"This experience of joy and unity, of feeling like a part of Europe is not just going to go away. It will stay and cause changes. Maybe even revolutionary changes. Revolutions don't happen on the streets, they happen inside your heads," Melamed writes.

At the same time, the filmaker warns that, according to Russian history, too much contact with Europe can rouse suspicion from the authorities and prompt them to launch a crackdown.

"Dear guests, don't leave, don't leave us alone over here, one on one with officials and security forces as they wake up," she writes.

Nearly 70 percent of Germans polled think the chancellor should travel to Russia for the soccer tournament. Germans appear to have softened their attitudes toward Russia since the 2014 Winter Olympics in Sochi. (14.06.2018)

Racist and xenophobic sentiments are widespread in Russian football, but a small group of fans are hoping to change that. The World Cup could provide a good opportunity to transform the country's supporter culture. (15.06.2018)