5 ways the football World Cup has transformed Moscow - for now

"This is a Moscow I don't know" has become the rallying cry of the Russian capital's residents since the World Cup started. The tournament has seemingly pressed pause on laws – and has changed the city's public space. 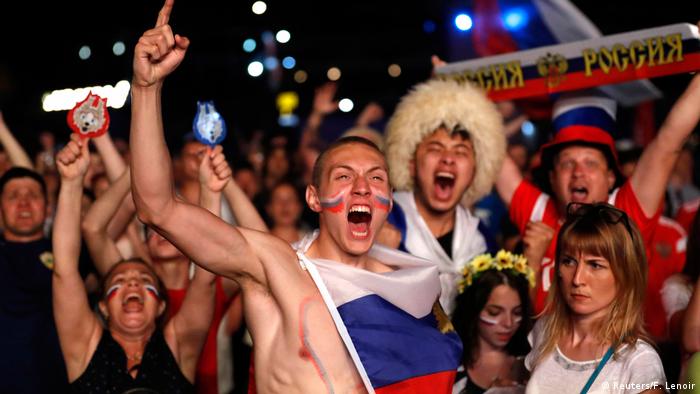 Just a few days before the football World Cup kicked off, I saw a workman hurriedly repainting the final burgundy brushstrokes of the letters "built in Lenin's honor" under the name of a metro station in the center of the city. It was part of the final push to spruce up the capital for the arrival of foreign football fans.

In some of Russia's host cities, there were reports of banners being hung and large fences being built to cover crumbling buildings. In Samara, people complained that traditional wooden houses were being given a makeover that left their windows painted shut but the back of their facades untouched.

But despite the criticism and now that the World Cup is underway, changes seem to have gone deeper. Many of the tacit rules of conduct in the city are being broken. The smiles of fans seem to be proving infectious in Moscow

Since the World Cup began, smiling is no longer frowned upon in Moscow. Usually, a smile is simply not a cultural currency in Russia like it is in some countries in the West - particularly in public. When I first came to Russia, people always asked me "why do you smile so much?" There is even a Russian proverb that translates as "laughing for no reason is a sign of foolishness."

Russians can hardly be called unfriendly – in fact, when you become friends with a Russian, they will often really and truly welcome you into their life. But on the streets, Russians can sometimes seem stony-faced. Now, smiling isn't unusual in Moscow. And not just by Red Square, where locals will pause to take a selfie with fans in sombreros.

Normally idle talk on the metro is met with angry stares. Older Russian women might even silence loud chatter. Of course, the noise in metro trains is itself sometimes so deafening that it makes talking nearly impossible anyway. But for the World Cup, the tacit rule on keeping mum seems off the table. And speaking a language other than Russian also doesn't evoke the stares it often does on Moscow's streets.

There have also been changes in behavior on a more official level. Despite the so-called gay propaganda law that is in force in Russia, the World Cup's anti-discrimination officer Alexei Smertin has stated that during the tournament "there won't be a ban on carrying rainbow symbols in Russia." Several fans and activists, including Aleksandr Agapov, the president of Russia's LGBT sports federation, have been proudly flying the rainbow flag - an act that in normal circumstances would be considered illegal.

In recent years, the Russian government has ramped up protest laws – particularly since the mass anti-government marches that took place between 2011 and 2013. Any demonstration has to be authorized by the government, and even then, protesters can end up with jail sentences or large fines. In July, a protester holding a placard reading "Putin lies" was arrested at a march for online freedom of speech. Individual protesters can take to the streets in Russia without approval – but are routinely arrested as well.

On the whole, it seems that police have been instructed to be much more tolerant for the World Cup. True, there is an even stricter authorization process for public events not connected to football during the World Cup. But considering how strictly controlled the public space usually is, it still feels like a breakthrough - or at least a huge contrast - to see spontaneous gatherings of people carrying flags and signs as police look on. 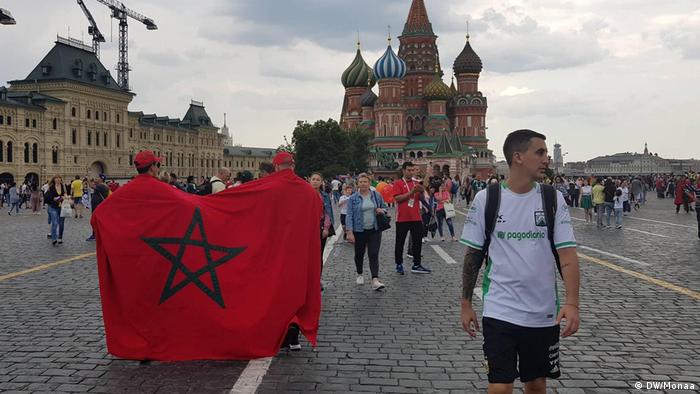 Carrying political signs, placards and flags can be cause for arrest in Russia - particularly on Moscow's Red Square

As a result of the police's restrained behavior during the World Cup so far, officers in Moscow feel surprisingly approachable. Most locals would usually not saunter up to a policeman and ask for directions – and certainly not for a selfie. But the World Cup visitors have no reason to be wary of the police. And it seems to be a two-way street – I have even seen one policeman smile in a conversation. Still, at the opening match of the World Cup, it felt surreal seeing officers of the National Guard, which reports directly to the Kremlin, marching by crowds of cheering South American fans at the fan zone. One fan even tried to get an officer to dance.

With more than three weeks of World Cup action still ahead, the question is whether any of the changes in Moscow will stay. It seems likely that the official regulations and the police will go back to business as usual when the World Cup ends. But perhaps at least the smiles will stay.

Alexi Navalny has been freed from prison after serving a 30-day sentence for staging illegal protests. His release coincides with the opening of the FIFA World Cup in Russia. (14.06.2018)

In his second blog from Moscow, Nigerian journalist Samson Omale describes his experiences in getting to grips with the sheer size of the host country and learning how to walk the Russian way.