Leaders of Russia and Turkey agreed on steps to "normalize" the situation in Idlib, where Syrian troops are advancing with Russian air support, Vladimir Putin has said. Erdogan hinted at buying Russian fighter jets. 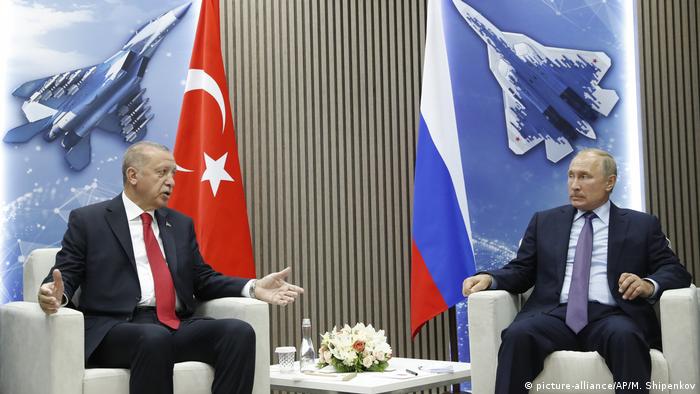 Turkish President Recep Tayyip Erdogan slammed the Syrian government over its offensive into the rebel-held Idlib on Tuesday, saying it was "unacceptable that the regime rains death on civilians from air and land, under the pretext of fighting terrorism."

Meeting his Russian colleague, Vladimir Putin, Erdogan also said that Turkey's troops in the region were "in danger."

"We do not want this to continue," he said on the sidelines of Russia's air show MAKS outside of Moscow. "All necessary steps will be taken here as needed."

Moscow and Ankara had set up a demilitarized zone in the jihadi-dominated province. However, Syrian troops backed by Russian airpower have advanced in recent weeks against jihadi forces in the last major rebel enclave in northwestern Syria, and encircled a Turkish military post.

On Tuesday, Putin also expressed concern over the Idlib escalation, but pointed to the need of fighting terrorism.

"Terrorists continue shelling the positions of Syrian government forces, trying to attack Russian military installations," Putin said. "The de-escalation zone must not serve as a refuge for militants, let alone a bridgehead for new attacks."

Putin told reporters that he and his Turkish counterpart had agreed on "joint steps" to normalize the situation.

"We have reached an understanding of how and what we can do together to resolve these issues," he told reporters.

However, neither Putin nor Erdogan provided any details about the arrangement.

Despite the conflicting interests in Syria, Putin and Erdogan seemed determined to project an image of unity and cordiality during the MAKS air show, calling each other "dear friend" and enjoying ice cream bought by Putin at a local stand.

Erdogan's presence at the show will also serve as a signal to NATO, after the US halted Ankara's participation in the development of F-35, the union's most advanced fighter jet. The US is enraged by Turkey buying Russia's highly advanced S-400 missile systems and had applied massive pressure on Ankara to cancel the purchase.

However, Turkey stuck to the deal and deliveries from Russia have already started. On Tuesday, Turkey took possession of another batch of S-400 equipment, Putin told reporters.

His Turkish colleague also hinted at buying Russian Su-57, a cutting-edge fighter plane meant to become Moscow's alternative for the F-35. Erdogan watched Sukhoi fighters flying during the event and then approached a Su-57 and asked if it was for sale.

"You can buy it," Putin confirmed, with both of them laughing.

Putin later told reporters that he and Erdogan had discussed cooperation on the Su-35, a slightly less advanced fighter, and that "Turkish partners" were interested in many projects shown at the fair.