Russia seeks to stem rise in food prices | Europe | News and current affairs from around the continent | DW | 08.03.2011

Traditional staples such as buckwheat, potatoes and cabbage have become increasingly difficult for Russian shoppers to afford. Moscow is keen to halt rapid price rises, and could extend its ban on exporting grain. 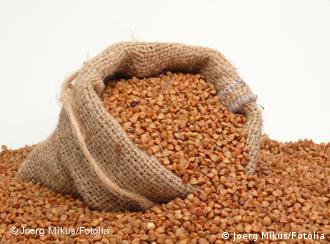 Buckwheat is a favorite staple in Russia

The good news is that the grain beloved by so many Russians, buckwheat, is now back on the shelves after an absence of several months from most stores. The bad news is the price for a kilogram has jumped by more than 180 percent.

It's a phenomenon that is fairly symptomatic for foodstuffs in the country. Cabbages and potatoes - other popular mainstays of the Russian diet - nearly doubled in price in 2010, according to the Federal State Statistic Service.

The prices for other staples such as bread, butter and milk rose upwards of nearly 23 percent last year.

While imported foreign foods have long commanded high prices in Russian stores, shoppers have lately become accustomed to paying more for the basics.

Buckwheat is just one such staple, with panic buying reported last year as customers stockpiled it at home. Until recently many stores were unable to stock the simple grain, which Russians eat at breakfast, lunch and dinner.

In January alone, the price of an average consumer basket rose by 5.5 percent since December, according to the state statistic service.

'We cannot turn our back' 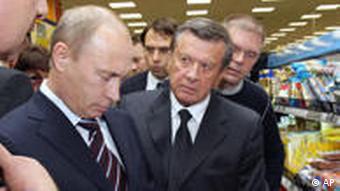 Putin voiced his concern about food prices ahead of elections

The problem was highlighted by Russian Prime Minister Vladimir Putin on Friday, as he announced income increases for state employees and students ahead of regional elections on Sunday.

"One of the biggest problems is rising food prices," Putin warned at a meeting of his ruling United Russia party.

"We cannot and will not turn our back on social obligations, leave people alone with their problems and the promise of a flourishing tomorrow."

Rising demand from the developing world had already driven up the price of basic food items on global markets when the Russian grain harvest was hit by a catastrophic drought last year. 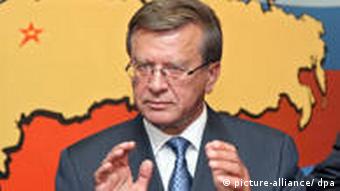 Export ban may be extended

"We are working on potential forecasts that involve keeping the ban in place until the end of the year," Zubkov said Wednesday. "We see what is happening on the food markets, and we don't see any improvement."

"It's not just the volume [of the harvest] that will determine whether to lift the ban or not. There are a lot of factors, like which cereals we'll have and how much," he added.

The government has said it will be unable to keep within its inflation target of below 7 percent this year, after an 8.8 percent increase in prices in 2010.

Representatives of agricultural nations meeting on the sidelines of Berlin's Green Week have agreed to work together on improving food security and easing price fluctuations worldwide. (23.01.2011)

A ban on Russian wheat and grain exports went in to effect on Sunday, and is expected to last until the end of the year. Severe drought and wildfires have destroyed the harvest and ravaged agricultural land. (15.08.2010)