In his annual press conference, Russian President Vladimir Putin said he does not want conflict with Ukraine and claimed he has seen a "positive" response from the US to his security proposals. 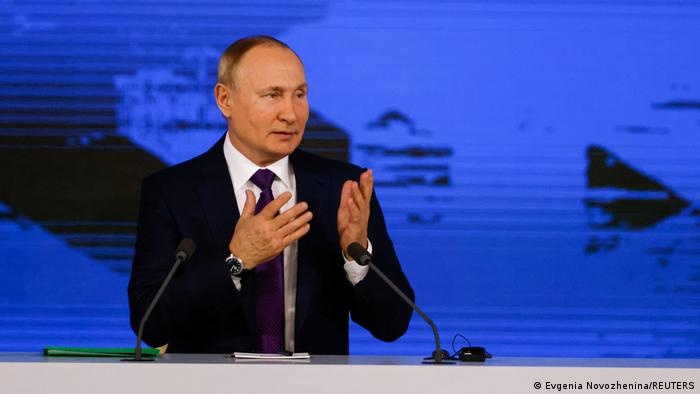 Russian President Vladimir Putin said Thursday during an annual press conference in Moscow that he does not want conflict with Ukraine.

"This is our (preferred) choice, we do not want this," Putin said. "We have to think about ensuring our security prospects not just for today and next week but for the near future."

Russia has engaged in a massive military buildup on the Ukrainian border in recent months. Western countries are concerned Russia could invade Ukrainian territory, similar to Moscow's annexation of the Ukrainian Crimean Peninsula in 2014.

The Russian leader said he has seen a "positive" response to recent security proposals that Moscow handed to the US and NATO allies. Russia has called on NATO to halt further eastward expansion, among other demands.

"We have so far seen a positive reaction. US partners told us that they are ready to begin this discussion, these talks, at the very start of next year," Putin said.

"It's a significant military buildup and there are no signs this is stopping or slowing down," Stoltenberg told German news agency dpa. Western countries have threatened Russia with new sanctions if Moscow indeed orders an invasion of Ukraine.

Putin: 'There were five waves of NATO expansion'

Russia has blamed the West for escalating tensions in the region.

"Is it us who are putting missiles near the US borders?" the Russian president asked during the Thursday conference. "No, it's the US who came to our home with their missiles. They are already on the threshold of our home. Is it some excessive demand not to place any offensive systems near our home?"

Putin also claimed the West is trying to make Ukraine "anti-Russia, constantly beefed up with modern weapons and brainwashing the population."

He said he seeks "good relations" with Ukraine, but described Ukrainian President Volodymyr Zelenskyy as being under the influence of "radical forces."

What else did Putin say?

The Russian leader also commented on the state of the economy in his country and the ongoing coronavirus pandemic.

The inflation rate in Russia reached 8% last month. "This is a serious issue and a serious challenge," Putin said.

In regards to the pandemic, Putin said he believes Russia will achieve herd immunity next year. Russia's total death toll from the virus passed 600,000 on Thursday, according to Reuters news agency.

Putin noted that "collective immunity today in Russia is 59.4%." He said this is "not enough" and said the country needs a level of immunity "of around 80%."

"Hopefully next year, somewhere at least by the end of the first quarter or in the second quarter, we will reach this level," Putin said.

In addition, Putin said Russia is not to blame for soaring gas prices in Europe and defended his government's decision to arrest Kremlin-critical voices.

"I remind you of what our adversaries have been saying for centuries: Russia cannot be defeated, it can only be destroyed from within," Putin said.

"There have always been, are and will be conmen," Putin asserted, in a reference to jailed Russian dissident Alexei Navalny. "There is no need to commit crimes."

The Russian leader condemned a Western boycott of the Beijing Olympics next year.

The Moscow press conference typically occurs once per year, with the Kremlin having previously said it will allow up to 500 domestic and international journalists to join the 2021 event.