Russian President Vladimir Putin threatened a "military-technical" reaction to NATO. The US expects talks with Moscow to resume in bilateral and multilateral formats in the new year. 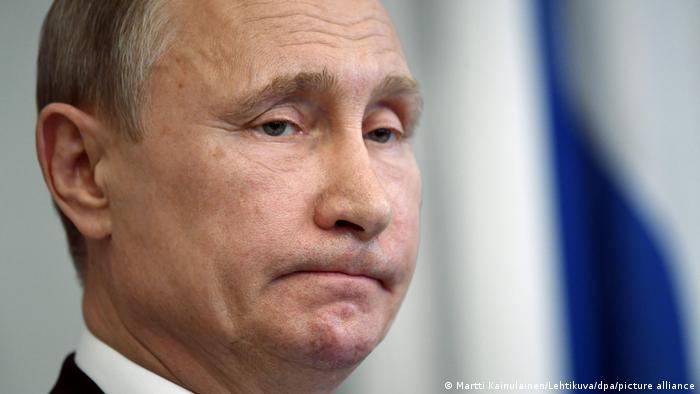 Russian President Vladimir Putin threatened a "military-technical" reaction to NATO as he accused the US of an "aggressive" approach to Ukraine.

Speaking at a meeting of the Ministry of Defense in Moscow, Putin said, "In case of continuation of the rather aggressive line of our Western colleagues, we will respond with adequate military-technical measures, will react harshly to the unfriendly steps."

Ukraine and the United States have for months publicly accused Russia of deploying some 100,000 troops to Ukraine's borders and potentially preparing for an invasion of the country. The US and other Western nations have threatened Putin with unprecedented sanctions.

Tuesday was the first time Putin spoke of conflict despite a sharp escalation of rhetoric in recent months. Days ago, Moscow handed Washington a list of security guarantees it sought from the West.

The US has urged Ukraine to act with caution and advised Moscow may be plotting provocations as a pretext for war.

What did Russian leaders say?

Putin and the Russian defense establishment see checking NATO expansion at the core of the country's national security strategy. By contrast, Ukraine eagerly hopes to join the alliance and the mutual defense pact it provides.

The Russian president again pressed for legally binding security guarantees from the US and NATO, specifically a check against further eastward enlargement of the defense bloc and against the deployment of missiles in Ukraine. He also seeks the roll-back of NATO's enhanced forward presence battalions in Poland and the Baltic states of Estonia, Latvia and Lithuania as well as no further deployments to the Black Sea region, namely in Romania and Bulgaria.

During the Russian defense meeting, Defense Minister Sergei Shoigu criticized Ukraine for what he termed aggressive maneuvers at the border. He also accused the US of deploying 120 private military contractors to two villages on the front line in the Donbas.

What has the US said?

Karen Donfried, the former head of the German Marshall Fund in Washington turned top US diplomat for Europe, told reporters Tuesday following visits to Kyiv, Moscow and Brussels that the US sees "some things we're prepared to work on, and we do believe there is merit in having discussion." However, she also added, "There are other things in those documents that the Russians know will be unacceptable."

She said bilateral US-Russia meetings are likely to occur at the start of the new year while talks within the NATO-Russia Council and the Organization for Security and Cooperation in Europe may be in the works by January as well.

"Let me be clear, there will be no talks on European security without Europe," she said.

The US would continue to supply Ukraine in the weeks and months ahead, and any invasion by Moscow would only increase US defense assistance, Donfried added.

What is Ukraine's position?

So far, Ukraine's entreaties to join NATO have received a tepid reception from the alliance's member states, though various nations within NATO have ramped up security assistance to Ukraine.

NATO has repeatedly telegraphed that decisions about Ukraine's NATO membership will not be made in Moscow.

Ukrainian President Volodymyr Zelenskyy told a gathering of all Ukrainian ambassadors Tuesday, "We want a very clear time perspective from NATO. A very concrete one. And we want to get it in 2022."

Zelenskyy emphasized joining NATO over the European Union but said that too was a top priority in the coming years.

Over 13,000 have died in the war in Ukraine. In 2014, Russia annexed Crimea from Ukraine before supporting forces in eastern Ukraine.