At a European Parliament ceremony in Strasbourg, representatives of the jailed Russian opposition leader Alexei Navalny have accepted the Sakharov Prize for Freedom of Thought on his behalf. 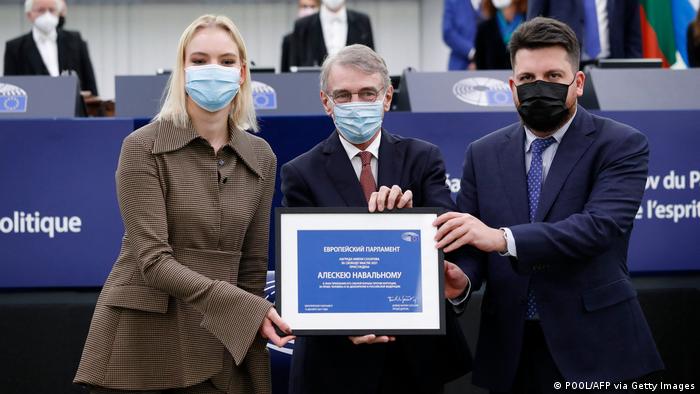 Daria Navalnaya (left) accepted the award on her father's behalf

Accepting the Sakharov Prize in Strasbourg in her father's name, Daria Navalnya said, "they were close to killing my mother, they almost killed my father, and no one will guarantee that tomorrow European politicians won't start falling dead by touching a doorknob."

The Navalny team was loudly applauded by the broad majority of MEPs attending the ceremony.

Speaking to DW ahead of the ceremony Navalny's chief of staff Leonid Volkov said, "the Sakharov prize is a very important recognition of our anti-corruption activities as a whole and the achievement of the Anti-Corruption Foundation founded by Alexei Navalny 10 years ago."

"He's not a lonely man in an ocean of silence, he is a man who managed to build a large political organisation in an innovative and creative manner, navigating Russia's political and media landscape," he added.

Alexei Navalny has been held in a corrective labor colony in Russia's Vladimir Oblast region, east of Moscow, since February 2 and is serving part of a three-and-a-half year sentence, for alleged parole violations. He faces six additional charges, including allegedly starting an "extremist group."

The European Court of Human Rights, as well as many western powers, have demanded his immediate release.

Awarding the prize in October, European Parliament President David Sassoli said, "He has fought tirelessly against the corruption of Vladimir Putin's regime. This cost him his liberty and nearly his life. Today's prize recognizes his immense bravery, and we reiterate our call for his immediate release."

Other nominees this year were a group of Afghan women fighting for equality and human rights and former interim president of Bolivia, Jeanine Anez.

Swedish Socialist MEP Evin Incir told the Navalny team during the award ceremonies, "your struggle for democracy and human rights is our struggle. For us in this parliament, our solidarity will never see any borders. We will continue to fight for Mr Navalny's release and all other political prisoners."

When MEPs chose Navalny in October, Russian President Vladimir Putin's spokesman, Dmitry Peskov, said "we respect the institution of the European Parliament, but no one can force us to have respect for such a decision."

Navalny has spent over a decade as one of the most vociferous Kremlin critics. His poisoning in August 2020 drew increased international attention to his campaign. 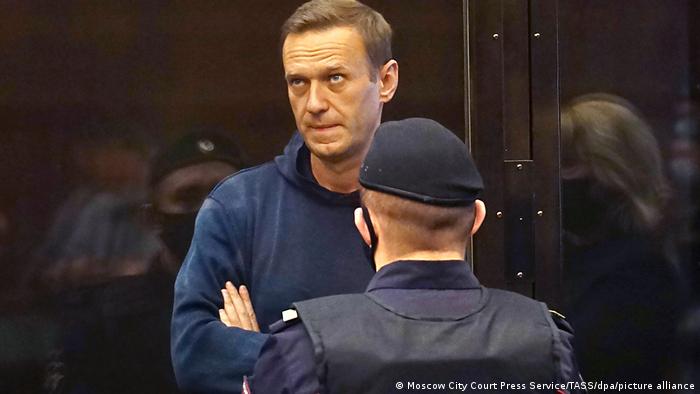 Independent United Nations experts uphold Navlany's claim that Russia is responsible for administering the Novichok nerve agent to try to kill him. He fell violently ill on a domestic flight and was later flown to Germany for emergency medical treatment. After recovering he returned to Moscow and was arrested immediately after disembarking the plane.

The day before Navalny officially became the Sakharov laureate, one of the prize's past winners, Memorial, a long-standing civil rights organisation in Russia, was facing a Russian Supreme Court hearing where the prosecution is pressing for its closure.

The organization won the Sakharov Prize in 2009 for its work to document and preserve information around the crimes committed by the Soviet Union.

The European Union and the United States have both called on Russia to stop its legal case against Memorial which it claims is a "foreign agent."

Earlier this month, Russian journalist Dmitry Muratov jointly received the Nobel Peace Prize for "efforts to safeguard freedom of expression, which is a precondition for democracy and lasting peace."

The editor-in-chief of the Russian newspaper Novaya Gazeta won the award alongside Maria Ressa, a Filipino-American journalist and author.

Muratov says that he was the "improper" recipient of the prize and insisted that he would have given it to Navalny instead.

Jonathan Katz, Director of Democracy Initiatives at the German Marshall Fund, told DW that the awards to Kremlin critics this year do not make them "anti-Russia" prizes.

"This isn't about calculating whether you can have a positive relationship with the Kremlin. This is about human rights and democracy," he said.

Navalny's chief of staff, Leonid Volkov, says he hopes the situation for critics and dissidents will improve.

"The recent crackdown against the opposition, like hundreds of journalists who are declared as foreign agents is, of course, a very disturbing transformation of Russian society. It is very painful," he said. "But the good news is that we don't believe that Putinism as such, could survive Putin."