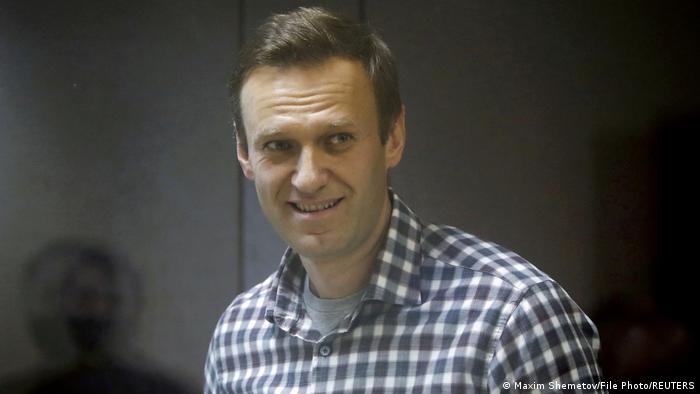 Navalny has been detained since January

"He has fought tirelessly against the corruption of Vladimir Putin's regime. This cost him his liberty and nearly his life. Today's prize recognises his immense bravery and we reiterate our call for his immediate release," European Parliament President David Sassoli said on Twitter.

Navalny is unlikely to be able to travel to receive the Sakharov Prize for Freedom of Thought on December 15 at the award ceremony in Strasbourg.

The prize, named after a Soviet dissident, is awarded by the European Parliament every year. Since 1988, the €50,000 ($58,156) prize has been awarded to individuals and rights organizations for their work toward promoting and defending human rights and freedoms.

The parliament's EPP Christian Democrat group announced Wednesday's decision in a tweet. "Mr. Putin, free Alexei Navalny. Europe calls for his — and all other political prisoners' — freedom,'' it said.

"Navalny is the only person on this planet, who deserves the Sakharov prize. He has been fighting for the freedom of speech, liberty, democracy, transparency and against corruption for decades and he has paid a big price himself. He was put in jail, fined, his organization was demolished. He was poisoned," said Peter van Dalen, a European lawmaker and member of the EPP, in a DW interview.

In January, Navalny was detained after flying back to Russia from Germany. The 45-year-old dissident was sentenced to 2.5 years in a penal colony for violating parole from a previous conviction he says is politically motivated.

Ahead of his return to Moscow, Navalny was in Germany for five months for medical treatment after being poisoned in Siberia in August 2020 with a military nerve agent. Russia has denied its involvement and has accused the West of a smear campaign against it.

A Moscow court in June labeled Navalny's Foundation for Fighting Corruption and its network of regional offices extremist groups, a ruling that exposed Navalny's allies to prosecution.

Last month, Russia's Investigative Committee, which probes major crimes in Russia, launched another probe targeting Navalny. The committee said that by 2014 Navalny had "created an extremist network and directed it" with the aim of "changing the foundations of the constitutional system in the Russian Federation."

Still, Navalny's allies have continued to criticize the Kremlin. During last month's Russian election, they launched a tactical voting app in a bid to challenge the country's ruling party.

A flashpoint in EU-Russian tensions

Navalny's recognition with the human rights prize will likely heighten tensions between the 27-nation bloc and Russia.

The EU has been calling for Navalny's release since he was first arrested, and it views his imprisonment as politically motivated.

Last year, the bloc imposed sanctions on six Russian officials for their alleged involvement in the poison attack on Navalny.

The European Parliament had awarded the 2020 Sakharov Prize to the Belarusian opposition leader Sviatlana Tsikhanouskaya — also amid tensions with Minsk and sanctions against top Belarusian officials.

Renata Alt, a member of the Bundestag with the Free Democrats (FDP) told DW that the announcement was an "important sign that he will not be forgotten behind bars." She then criticized German Chancellor Angela Merkel, who she said had never taken enough action against Putin's government.