Russia pledges billions in investment to help rescue the eurozone | Europe | News and current affairs from around the continent | DW | 15.12.2011

Russia pledges billions in investment to help rescue the eurozone

Russian President Dmitry Medvedev has pledged up to 20 billion euros of Russian investment to bolster the eurozone. But irregularities during recent elections in Russia were also on the agenda of an EU-Russia summit. 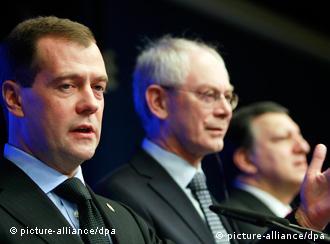 Speaking at the close of what was his final summit with the EU as Russian president, Dmitry Medvedev offered his solidarity with the bloc, saying Russia was willing to contribute to the rescue plan managed by the International Monetary Fund (IMF) for the struggling euro currency.

"We are ready to invest all financial means to back the European economy and the eurozone," Medvedev said following talks with European leaders.

The EU must be "preserved as a powerful political and economic force … [and the euro] preserved as one of the most important reserve currencies," he added. The EU is Russia's biggest trading partner.

Although the president didn't mention specific figures, his economic advisor, Arkady Dvorkovich, said earlier on Thursday Moscow was prepared to offer up to 20 billion euros ($26 billion). That figure was dependent on progress towards a 200-billion-euro boost for the IMF agreed by European Union leaders, Dvorkovich said.

EU states have until Monday to work out the details of a number of bilateral loans to the IMF which are to be used in efforts to stabilize the eurozone.

With 41 percent of Russia's currency reserves held in the euro and half of all Russian external trade conducted with the EU, Russia's interests in the survival of the euro are clear.

"Europe has a stake in Russia's success as I believe Russia has a stake in Europe's success," European Commission President Jose Manuel Barroso commented on Thursday. "We should strive for a comprehensive and broad agreement with ambitious trade and energy chapters." It wasn't just economic concerns, however, which were on the agenda of the 28th EU-Russia summit in Brussels. Speaking at a press conference at the close of the summit, EU president Herman Van Rompuy said the bloc was troubled by reports of corruption in Russia's recent elections.

Tens of thousands gathered in Moscow and other cities in Russia on Saturday denouncing the polls on December 4 as a farce. Van Rompuy noted, however, that EU leaders had had an "honest discussion" with the Russian president. He went on to praise the regime's response to the weekend protests.

"In contrast, the recent large demonstrations were peaceful and the authorities in my view handled it very well," he added.

On Wednesday the European Parliament called for Russia to hold a new round of "free and fair elections" and conduct investigations into any fraud claims. Medvedev declined to comment on the demands, but noted that his country's legislature had "expressed indignation with the position of the European Parliament."

No real progress was made during the summit over the issue of sanctions against Syria and Iran. Moscow has been blocking United Nations condemnation of the Syrian government's deadly crackdown on anti-regime protests. Russia also opposes any further moves on Iran, whose nuclear program worries the West. 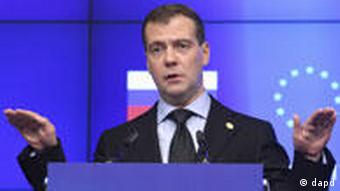 Medvedev opposes any further moves on Syria or Iran

The two sides did, however, make progress on the steps needed to achieve visa-free travel between Russia and the EU.

"The task ahead of us is to fully implement the agreed common steps, which can lead to the opening of visa-waiver negotiations," Commission President Barroso said.

On Tuesday, Russia struck an agreement with Poland on limited visa-free travel for inhabitants of the Russian exclave of Kaliningrad, sandwiched between Lithuania and Poland.

Meanwhile trade between Russia and the EU is expected to grow further, with Russia expected to join the World Trade Organization on Friday following 18 years of negotiation.

The accession would offer "a myriad of new opportunities for trade, investment and global growth," Van Rompuy said.

Russia's president has posted on his Facebook page that he does not endorse the demands of protesters who gathered over the weekend, but said he ordered a probe into the results of the disputed election. (12.12.2011)