Russia's president has posted on his Facebook page that he does not endorse the demands of protesters who gathered over the weekend, but said he ordered a probe into the results of the disputed election. 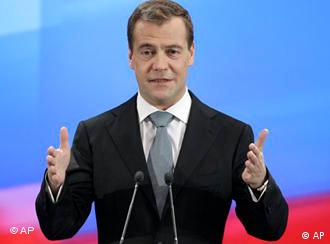 Medvedev said he has ordered a probe into fraud charges

Russian President Dmitry Medvedev is to face questions from European Union leaders about Russia's recent parliamentary election, according to a spokeswoman for EU Foreign Policy Chief Catherine Ashton. The EU-Russia summit is set to take place on Wednesday and Thursday in Brussels.

Medvedev announced the probe on Sunday, adding that he disagreed with calls from protesters over the weekend to hold fresh elections

Tens of thousands gathered in Moscow and other cities in Russia on Saturday denouncing the polls on December 4 as a farce.

"I do not endorse any of the statements or calls that were made in the gatherings," Medvedev wrote on his Facebook page.

He added that he had "issued instructions to check all polling station reports," and that Russians were entitled to express their frustrations within the confines of the law. He did not elaborate on who would carry out the probe. 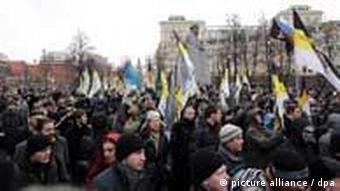 Tens of thousands turned out in protest on Saturday

"People have the right to express their opinion, which is what they did yesterday," he wrote. "It is a good thing that everything happened within the law."

Medvedev's Facebook comments were dismissed as "a mockery" by former cabinet minister turned Kremlin opponent Boris Nemtsov, who has called for new elections.

"These are worthless instructions ... that are not going to calm anyone down," Nemtsov told Echo of Moscow radio.

Medvedev's comments also provoked an angry reaction amongst Facebook users - well over 10,000 people left remarks on his page, criticizing his statement as "empty talk" and "deplorable."

Neither Medvedev nor Prime Minister Vladimir Putin made any public appearances over the weekend, however Putin spokesman Dmitry Peskov said in a statement that the Kremlin "respects the point of view of the protesters" and is "hearing what is being said."

Putin is widely expected to return to the presidency after elections next year.

Protesters were also calling for the release of people arrested for organizing demonstrations and the resignation of electoral officials.

Less than 100 arrests were reported nationwide on Saturday, far less than the hundreds taken into custody in the days immediately following the election.

Russia has been rocked by nation-wide protests against alleged election fraud during last weekend's parliamentary vote. The rally in Moscow was of historic significance, says DW's Ingo Mannteufel. (10.12.2011)