Russia: Norilsk environmental disasters — what you need to know | Europe | News and current affairs from around the continent | DW | 01.07.2020

Russia: Norilsk environmental disasters — what you need to know

Russian mining giant Nornickel has reportedly caused yet another ecological catastrophe. Environmentalists say the company, owned by an oligarch with ties to the Kremlin, pumped highly toxic wastewater into the tundra. 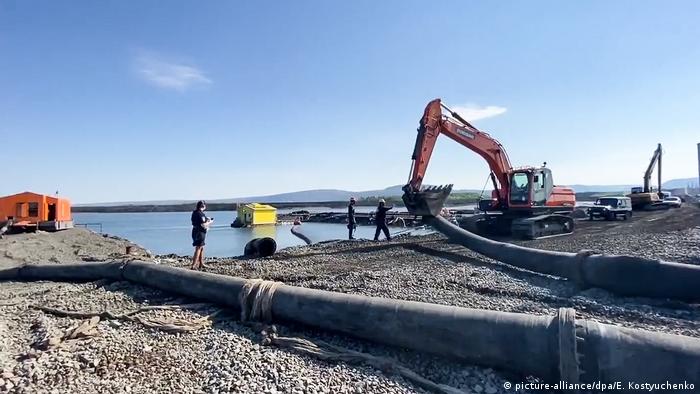 Norilsk, the world's northernmost industrial hub, is in the news again and not because of its growing production of nickel and palladium. The Siberian city has been in the spotlight for its problems with environmental pollution before. Now, reports have surfaced that mining giant Nornickel is to blame for two environmental catastrophes — along with attempts to conceal them.

Nornickel is one of Russia's largest exporters of natural resources. The company, which is crucial to the Russian economy, is run by billionaire Vladimir Potanin, who has close ties to the Kremlin.

On May 29, over 20,000 tons of diesel fuel leaked from a power plant storage site owned by the company. The fuel seeped into the soil and nearby rivers, polluting the region's delicate ecosystem. For several days, Nornickel and local authorities then attempted to conceal or downplay the incident.

During a video conference call on June 3, Russian President Vladimir Putin then finally declared the situation a national emergency, and the Ministry of Emergency Situations sent personnel to the city to help out. In a later conference call with Putin, Nornickel boss Potanin promised his company would foot the bill for the cleanup. He pledged the equivalent of €127 million ($142  million) to finance the undertaking — an astronomical sum by Russian standards.

Russian state-run media have since regularly reported that major progress is being made in the cleanup operation. Environmentalists have, however, stressed that accidents of this kind often take years to undo. 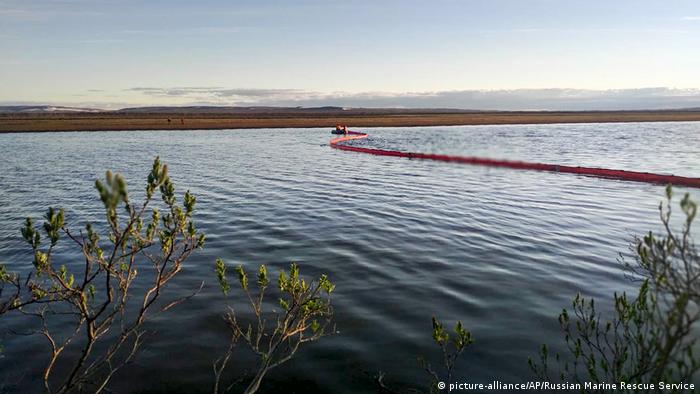 Then, just one month later, news of a second serious incident broke. On June 28, reports surfaced that wastewater containing toxic elements had been pumped from a settling basin into the tundra. According to the independent Moscow daily Novaya Gazeta, which looked into the case with help from local Greenpeace activists and a former staffer of Russia's environmental agency, Vasily Ryabinin — the water was contaminated with heavy metals and sulfuric acid.

Nornickel has since confirmed the incident, yet claimed the wastewater spilled over the edge of the basin due to heavy rainfall. It claims it halted the spillage by pumping excess water into the "neighboring area."

Environmentalists and journalists contest this version of events. Ryabinin, who sent a letter to President Putin detailing the extent of the pollution, says he visited the settling basin with a Novaya Gazeta reporter on June 20. He had previously noticed on Google Maps that local lakes had acquired an unnatural hue. He then sent a drone over the area and was able to document two hoses pumping water out of the basin.

Eight days later, environmental activists headed to this location. They found the hoses in question and detected a strong chemical scent emanating from the water being pumped out of them into the surrounding area. They filmed and photographed the scene, including trees dying nearby.

Immediately afterwards, Nornickel workers and police officers showed up. The workers then hastily dismantled the pumps and hoses. 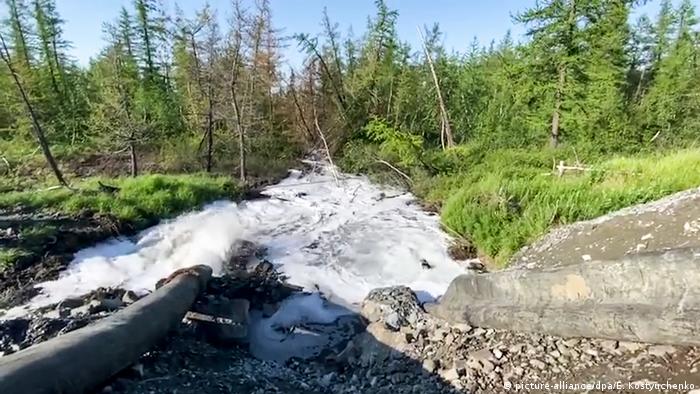 The activists now fear the highly toxic wastewater could flow into Lake Pyasino via its tributaries north of Norilsk. This body of water, which is not well-known even in Russia, is considerably larger than Germany's Lake Constance. Rivers polluted during the diesel leakage in May also feed into the lake.

Environmentalists have taken water samples from Lake Pyasino and the rivers that flow into it to measure the pollution. Sergey Mitrokhin, a Moscow Duma lawmaker with the opposition Yabloko party, had wanted to fly them to Moscow to be analyzed. At Norilsk airport, however, he was prevented from taking the samples aboard. In a blatant violation of Russian law, officials claimed he needed Nornickel's permission to do so.

On June 29, the association of independent Russian media outlets, Syndicate 100, then demanded Russian authorities explain how "businessman Vladimir Potanin has been able to establish a quasi-autonomous state on Taymyr Peninsula with its own laws." It urged the Russian state to reassert its control over the region.

That same day, a major fire broke out at a garbage dump only 5 kilometers (3 miles) from the city of Norilsk. An area of 1,000 square meters (10,764 square feet) containing industrial waste went up in flames, producing thick clouds of smoke. State-run news agency TASS later reported the fire had been put out.

Authorities said the levels of toxic substances in the air had not exceeded the legal limits. Nornickel, meanwhile, has insisted it did not dump any waste at the site. Whatever the case, Norilsk has become an environmental focal point in Russia this summer.

Wildfires in Russia: Will war in Ukraine limit firefighting response? 11.05.2022