Radiation has spiked at a nearby town following last week's explosion at a rocket testing site. First responders have been silenced and villagers told to leave, but the evacuation order has since been canceled. 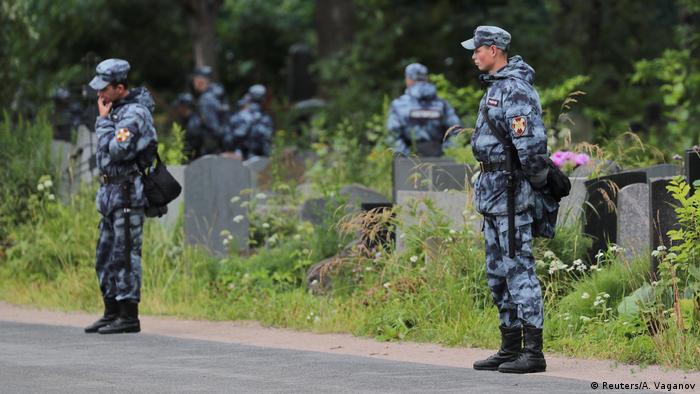 Radiation levels in the Russian town of Severodvinsk were up to 16 times higher than normal after an explosion in the nearby Nyonoksa rocket test site, officials from Russia's Roshydromet weather service said on Tuesday.

The blast at the White Sea platform killed five scientists last Thursday during a test of a jet engine, according to Russian authorities. The Arctic facility is located in Russia's northwestern Arkhangelsk region.

Now experts have warned that the consequences are being felt in Severodvinsk, a town about 30 kilometers (20 miles) east of Nyonoksa.

"In six of the eight points in Severodvinsk, an excess gamma radiation dose rate at 4 to 16 times the background values was detected," federal environment watchdog Roshydromet said.

Russia's Rosatom nuclear agency said its employees were providing support for the "isotope power source" of a missile and were thrown into the sea from the testing platform by the force of the explosion.

The five scientist were buried with honours on Monday, with Rosatom director Alexei Likhachev praising them as "true heroes" and "pride of our country."

Meanwhile, Sergei Kirienko, Russian President Vladimir Putin's deputy chief of staff, said the five who perished at the plant would be posthumously awarded with top medals.

Authorities recommended the evacuation of the Nyonoksa test site while work is conducted, according to reports from multiple news agencies. The recommendation was rescinded hours later, adding to the uncertainty and confusion surrounding Thursday's incident.

"This is a load of rubbish, there is no evacuation of any kind," he told the Interfax news agency.

Also, in an apparent clash with the Roshydromet report, Russia's Defense Ministry insisted that no radiation had been released.

Medics who treated victims from the accident have been sent to Moscow for medical examination, TASS news agency cited an unnamed medical source as saying on Tuesday. The medics have signed an agreement promising not to divulge information about the incident, TASS cited the source as saying.

The United States said on Tuesday that it was not prepared to say whether a nuclear explosion had taken place, but it was "an explosion that involved radioactive elements." The comments were attributed to an unnamed senior US official cited by the Reuters news agency.

Russian officials said the the engine that exploded had liquid-propellant. However,Rosatom's reference to "isotope power source" led some observers to conclude the missile was part of Russia Burevestnik (Petrel) program, powered by nuclear energy. The program was unveiled by Russia's President Vladimir Putin last year, and was since code-named Skyfall by NATO.

The theory was apparently confirmed by US President Donald Trump, who tweeted that the US was "learning much from failed missile explosion in Russia."

"The Russian 'Skyfall' explosion has people worried about the air around the facility, and far beyond. Not good!" he wrote.

What to do with Moscow's garbage?