Russia builds military ties with Africa | News and current affairs from Germany and around the world | DW | 01.06.2018

The Central African Republic, then the Democratic Republic of Congo: Russia is looking to boost its military cooperation in Africa, with an eye on other interests. 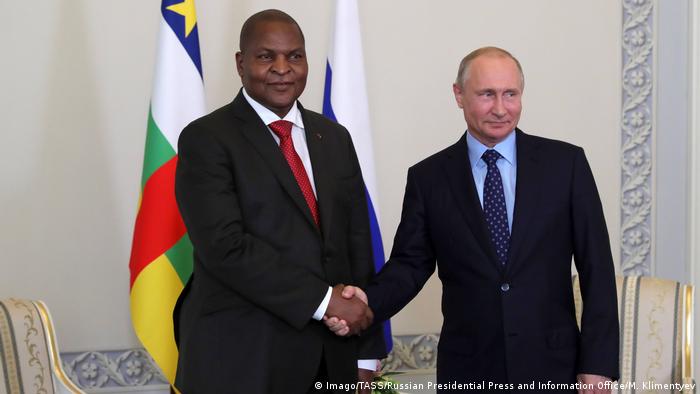 The DR Congo is looking for friends. The large country in the heart of Africa was long an ally of the West, but now, the government appears to be looking for other partners.

Broadcaster Radio France International (RFI) reported that Kinshasa and Moscow had agreed in 1999 that Russia would equip the Congolese army. It would also train Congolese soldiers. The agreement apparently never came into force and DR Congo's Parliament wants to discuss changing that, according to RFI.

The choice of the two countries was deliberate. "The relations between those countries and the West are, let us say, tense. Maybe Russia has a window of opportunity to enter, get easy influence and maybe develop some economic activities," says French Africa expert Roland Marchal. Military cooperation could mark the start.

Experts believe that Russia wants to strengthen its own weapons industry in the process. A study by the British think tank Chatham House shows that a mere 3 percent of Russian weapons exports go to Africa, but the continent is a growth market, Russia being the main supplier to several countries.

"For some countries in Africa it is very difficult to get Western arms. Russia does not have a lot of the same preclusions on selling weapons. It doesn't tie them to human rights. It doesn't tie them to various regional conflicts that states are involved in. It sees this as an area for growing the market," says Peter Stronski, Russia expert at the influential US think tank, the Carnegie Endowment for International Peace.

It shouldn't stop at weapons. The DR Congo is rich in natural resources like coltan, cobalt, gold and diamonds. Neighboring CAR also exports diamonds. "Russia is exploring the possibilities of the mutually beneficial development of natural resources," Artyom Kozhin, the deputy director of the Russian information and press department, said in March.

For Russia it is not only a chance to cover its own natural resource needs. It can use the presence to boost its own industry. "Russia commands over expertise in the areas of mining and oil production," says Marchal.

In the case of both governments the deals have gone well. The CAR, one of the world's poorest countries, has been in crisis since 2013. Christian and Muslim militias are fighting each other against the backdrop of President Faustin Touadera's weak government.

Around 14,000 UN blue helmets try to ensure peace, although the government considers the mission ineffective and wants the UN arms embargo on the country lifted.

"The arms embargo has strengthened anarchy and the warring sides and weakened the army," politician Aristide Brian Reboas tells DW. 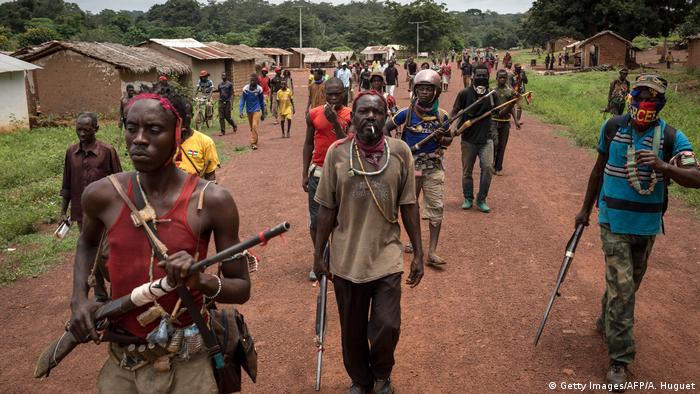 Christian Anti-balaka and Muslim Seleka militias are at the center of the civil war in the Central African Republic.

Congolese President Joseph Kabila is also interested in partnering with the Russians as Western allies have long distanced themselves from him. Kabila has exceeded both his constitutional terms while his government hasrepeatedly postponed fresh elections.

"Regimes that are contested could find this connection with Russia like a life insurance," says Marchal.

"By welcoming Russians in DR Congo and CAR, those two regimes increase the price. They could bargain and ask Western states to be more generous so that they diminish the Russian presence or influence."

It is a Cold War tactic. At the time, many African countries frequently switched sides – depending on the support they received.

No one can assess how Russia's presence in the two countries will pan out in the long run. Observers are certain only of one aspect:

"Russia is trying to expand its footprint in Africa," says Peter Stronski of Carnegie Endowment for International Peace. An Africa-visit by Foreign Minister Sergei Lavrov signaled that too. His trip in March covered six countries: Angola, Ethiopia, Mozambique, Namibia and Zimbabwe – all with Soviet-era ties.

US and Russia in Africa: Trade and security interests

US Secretary of State Rex Tillerson and Russian Foreign Minister Sergei Lavrov both visited Ethiopia but appear not to have met. DW spoke to Chatham House expert Alex Vines about the two ministerial visits. (09.03.2018)

The UN secretary-general has pushed for additional peacekeepers in CAR. He is expected to discuss the political crisis in Cameroon with President Paul Biya. (27.10.2017)