President Putin opened an arms expo by publicly placing construction orders for six new naval vessels. The Kremlin is focused on military modernization as relations with the West worsen. 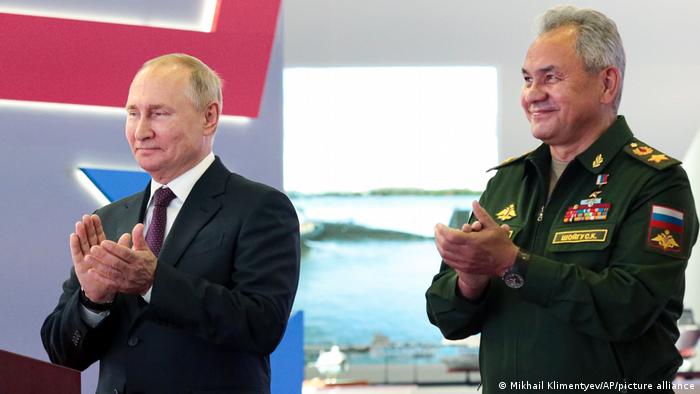 The event, a combination of war games and arms expo, is designed to showcase Russian military hardware and attract foreign buyers. Jordan's King Abdullah II, for instance, was among those in attendance.

The naval order was announced in a video call with shipyards in Severodvinsk, St. Petersburg and Komsomolsk-on-Amur.

"A strong and sovereign Russia needs a powerful and well-balanced navy," said Putin. "We will continue to boost the potential of the Russian navy, develop its bases and infrastructure, arm it with state-of-the-art weapons," he added.

"I would like to stress that all the ships will be equipped with modern high-precision weapons, the latest navigation and communications equipment. The majority of these technologies proved their effectiveness during combat operations in Syria," said the president as he addressed shipyard workers.

The move is part of the Kremlin's push to overhaul the Russian navy, a top priority as its relations with the West deteriorate.

"We will continue to show the Russian flag in strategically important ocean areas," said Putin on Monday, as he seeks to re-establish a regular Russian naval presence on par with that of the Soviet Union during the Cold War.

The nuclear submarines, named Dmitry Donskoy and Prince Potemkin, will be built at Sevmash Shipyards in Severodvinsk; the diesel subs, named after the cities of Mozhaisk and Yakutsk, will be constructed at Admiralty Shipyards in St. Petersburg; and the corvettes, named Grozny (Fearsome) and Buyny (Wild), will be built at the Amur Shipbuilding Plant in Komsomolsk-on-Amur.

Russia's military activity — most notably in eastern Ukraine and Crimea, which Moscow illegally annexed in 2014 — has put the NATO military alliance on edge and thrown ties with the West into a tailspin, pushing relations to their lowest point since the Cold War.