Two of the world's largest oil producers see a consensus emerging between OPEC and non-OPEC states for long-term cooperation on stabilizing oil prices, including the extension of output cuts expiring at the end of 2018. 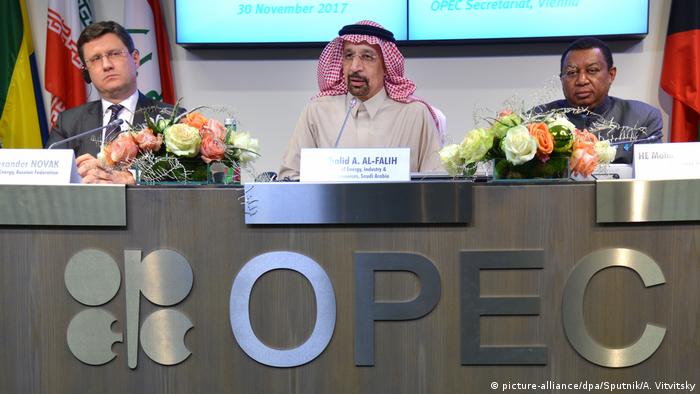 Ahead of a meeting between Russia and the Organization of Petroleum Producing Countries (OPEC) in the Saudi Arabian Red Sea resort of Jeddah on Friday, Saudi Energy Minister Khaled al-Faleh said there was "consensus" forming among oil producers to extend cooperation on a long-term basis.

His Russian counterpart, Alexander Novak, said there was a solid foundation for such cooperation between members of the oil cartel and other producers.

"We have created a very solid foundation for cooperation between OPEC and non-OPEC countries in the future even beyond the declaration of cooperation," Novak said.

The declaration of cooperation Novak was referring to is an agreement struck between the 14 OPEC members and an additional 10 non-OPEC countries in 2016 aimed at cutting their combined oil output by 1.8 million barrels per day (bpd) to reduce a global oversupply and boost prices.

Russia is the world's leading producer of crude oil, pumping around 11 million bpd. Its approval of the alliance is crucial to its success.

Previously, Moscow had appeared reticent to extend the output cuts beyond 2018, with Novak telling state-owned news agency Tass before his departure that Russia could still decide to begin rolling back the production cuts as early as this year.

But after meeting Saudi officials on Friday he said: "Both consumers and producers of oil are expecting us to retain this solidarity to ensure stability and growth of the market."

Saudi Energy Minister Khaled al-Faleh added that the two sides were "at the stage of setting a long-term framework" beyond 2018.

"Today [inventories] are still about 2.8 billion barrels, they are significantly below the peak in 2017 of 3.12 billion barrels but still above the time when the glut started to materialize," he said, adding that producers shouldn't be "complacent and listen to some of the suggestions of 'mission accomplished'."

Falih also noted that there remained many variables in the market as demand was uncertain and new supplies were emerging at a quicker pace than anticipated.

And indeed, rising prices were also a result of strong oil demand, posting the strongest year-on-year growth since the fourth quarter of 2010 at 2.55 million bpd. Beyond OPEC's supply management, crude prices have also been supported by an expectation that the United States will re-introduce sanctions on OPEC-member Iran.

A factor that could start weighing on prices again is the rising output of US shale, which has jumped by a quarter since the middle of 2016 to 10.54 million barrels per day (bpd). Unconventional drilling, or fracking, has made the US the world's second-biggest producer of crude oil behind only Russia.