Russia: 16 families in a single kommunalka apartment | Europe | News and current affairs from around the continent | DW | 13.09.2016

Kommunalkas are a leftover from the Soviet era. The idea is something akin to a student flat share, but the makeup of these communal apartments is usually completely random. Juri Rescheto visited one in St. Petersburg. 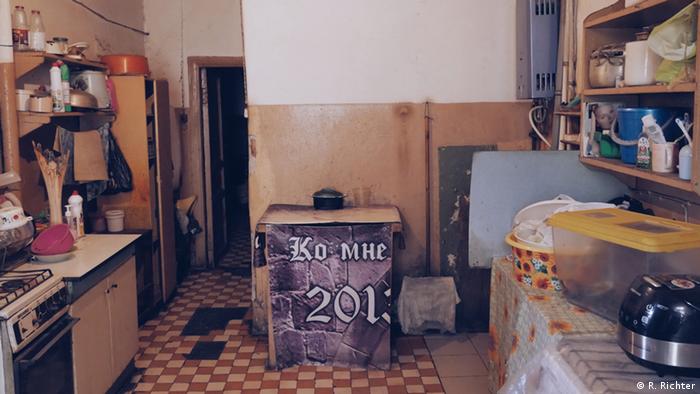 Sorry, but the first thing that hits you is the smell. The stairwell stinks. The front door doesn't close properly. And there's a kiosk just around the corner. It sells beer. A lot of beer.

Once this olfactory challenge is behind you and you've made it to the third floor of this beautiful and splendidly dilapidated Art Nouveau building, you find yourself in a whole new world. 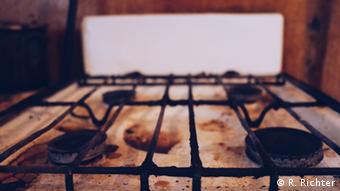 A world of voices and moods, people and opinions, recipes and rumors - the world of the "kommunalka" at 3 Ligovski Prospekt in the Russian metropolis of St. Petersburg.

The communal apartment occupies a whole floor. It's badly laid out. There's a corridor 12 meters long (40 feet) and 4 meters high with rooms measuring about 10 square meters (108 square feet) leading off it on both sides. At the end of the corridor is a bath. And a toilet. And a kitchen. For everyone. For 16 families - for all of the kommunalka's occupants: male and female, young and old.

The corridor is dark; paint is peeling off the walls. Half the lights don't work. But there's light at the end of it - daylight, coming from the kitchen, the kommunalka's command center. Polina, a friendly mother in her mid-30s, is in command. She was born in the kommunalka and has lived here the longest, so she has the greatest say in how things go.

Busily breastfeeding her baby, Polina reveals the secrets of peaceful coexistence. "There's a clear hierarchy," she says. "The people who've lived here longest have the most rights. Like me. They're allowed their own table in the kitchen and a corner of the cooker." 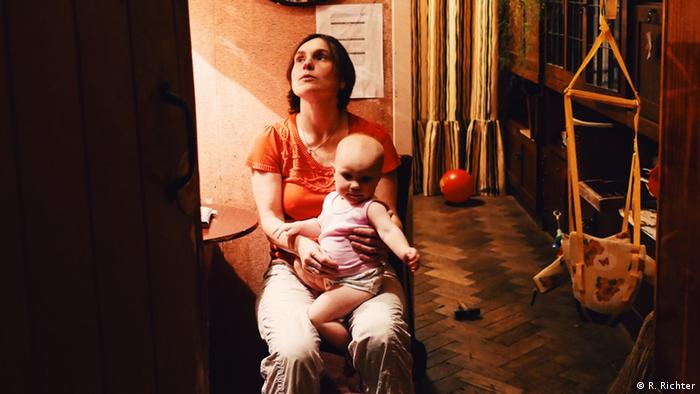 The oldest inhabitant Polina with her baby

Five tables and two stoves for 16 families. If you want to cook, you get in line. The only washing machine is in use 24/7. Polina's partner, Evgeny, emerges from the toilet with toilet paper in one hand and a toilet seat in the other - each family has its own. "Hello!" he says. "Welcome to our home! The lines get blurred here between the communal and the private."

A woman wearing slippers shuffles in. I'm told she's from Uzbekistan, but I don't learn her name. About half of the 16 families here are Uzbekistanis. They don't talk to me at first - they're suspicious of the reporter from abroad - but later on we make friends.

Polina is happy to talk - a lot and openly. She invites me into her room after just five minutes. She has a corner room with elaborate stucco, and as I enter the kommunalka cat, Joashik, plants himself in front of me. There used to be a rat and a budgie here, too; then one day they were gone ... 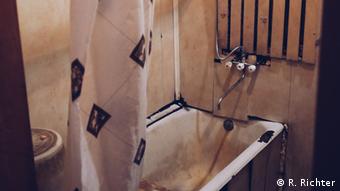 The bathroom: cheap and shabby:

The oak floorboards have a lived-in squeak. Sitting on Polina's sofa, I feel quite at home. "Why do you live here?" I ask her. "With so many people, and so little comfort?"

"Because it's comfortable," she smiles. "And cheap. We pay a third of what other people pay in the center of town. And we don't find it at all bad here. It's cozy. Only we keep getting more Uzbekistanis. That makes it less cozy."

Uzbekistanis and Tajikistanis have been part of the face of St. Petersburg for some years now. They serve on cash desks at the supermarket and clean hotel rooms; you'll see them sweeping the streets, running market stalls and driving taxis. These are guest workers who have to live apart from their families in Central Asia, in order to support them - with money from Russia.

If you thought kommunalka residents would sometimes eat together, you'd be wrong. They don't eat at all. Well, not visibly. Meals are prepared in the communal kitchen, but they're eaten separately, in the rooms - in some cases on the floor, if there's nowhere to sit, as with the hospitable Uzbekistani couple. 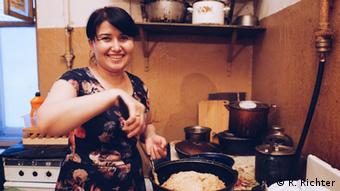 "We live here peacefully with everyone," Polina says after dinner, offering me coffee and a bit of kitchen philosophy. Anyone who wants to find out how Russians tick should head straight for the kitchen!

"Duma elections?" Polina asks Evgeny. "When was the last time I voted?"

"In the early 2000s," Evgeny replies. "Who are we supposed to vote for? We don't have a real opposition. One with its own manifesto - that might promise us a better life."

"Anyway," Polina says, "a big country like Russia needs an imperial leadership style with totalitarian aspects. If you want to change that, you risk unrest. I don't want that."

Many Russians accept this "imperial leadership style with totalitarian aspects" because they see it as a guarantee of stability. "Today's Russia is reminiscent of the Soviet Union in the 1970s,"Polina says. "In the end the economy will collapse and a new life will begin. But we won't see it. That's why we don't have any big plans for the future."

Evgeny agrees: "We live in the here and now. Nothing is stopping us from being happy in this country. Or rather, let's say: We don't hate anything here so much that we'd feel we had to get out. Of course Russia has its shortcomings. But what country doesn't?"

Stability is what President Vladimir Putin uses to secure support from Russia's Polinas and Evgenys. But for how much longer? The current economic crisis is making a stable future for Russia ever more uncertain. Prices are rising; wages are falling. What about the kommunalka? The kommunalka will stay. People feel secure here, despite the strict hierarchy - or perhaps because of it.

Leningrad: The city that refused to starve in WWII

It was Leningrad, not Stalingrad that was the Eastern Front's real World War II humanitarian disaster. Nazi Germany sent hundreds of thousands of civilians to their deaths through starvation and hypothermia. (08.09.2016)

In Russia, hatred of non-Russians a part of everyday life

A Tajik guest worker is shot in broad daylight in Moscow, losing an eye. The attack was racially motivated. Hate crimes are becoming a sad fact of everyday life in Russia, says DW’s Juri Rescheto. (02.06.2016)

There are a lot of fish on the Kamchatka Peninsula in the Russian Far East. But the same rules for catching them do not apply to everyone. Juri Rescheto reports from Kamchatka. (18.09.2016)

Uzbek President Islam Karimov has been buried in his birthplace, the ancient city of Samarkand. His demise leaves the country in a state of uncertainty following his long rule. (03.09.2016)

Speaking at a business forum in his hometown of St Petersburg, Russian President Vladimir Putin said Western sanctions would not succeed and urged business leaders to invest in Russia.

Putin’s decision to invade Ukraine has prompted thousands of people critical of the war to leave Russia. Istanbul has proved a popular choice, either for transit or a new home.