Safronov: The Muscovite who painted Putin′s portrait | Europe| News and current affairs from around the continent | DW | 12.09.2016

Nikas Safronov fuses artistic talent with business acumen, making millions for painting portraits of the powerful, such as Russian President Vladimir Putin, whom he admires. Juri Rescheto reports from Moscow. 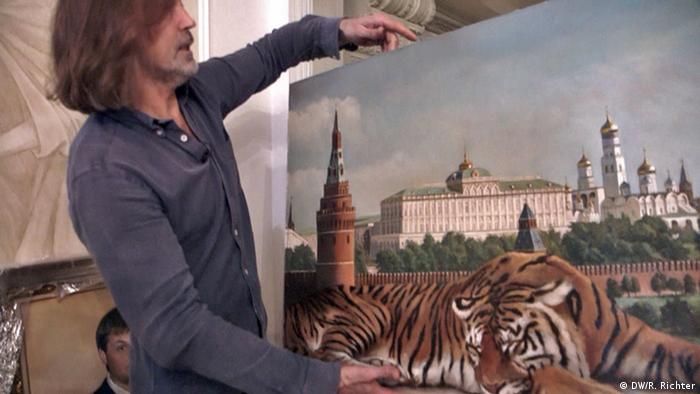 It is a breathtaking view from the spacious rooftop terrace at Brjusov Lane 17, a six-story building in Moscow's historic center. "Do you see my neighbor's glass roof?" Nikas Safronov says. "Sobyanin, the mayor of Moscow, is sitting there."

The roof has an open view on all four sides, one of which faces Red Square. We behold Russia's capital, drenched in golden sunlight.

"But doesn't Putin wave to you yet?" I joke about Russia's president. The 60-year-old Safronov is serious when it comes to Vladimir Putin.

"Putin does things that no one before him would have dared to do - except maybe Jesus Christ," Safronov says. "I have great respect for Putin." A portrait of Russia's president is looking at us almost as though it were satisfied with the artist's comment. Next to Putin is a painting of a Siberian tiger. Safronov is legend among contemporary Russian artists, many of whom share his opinion about Putin. 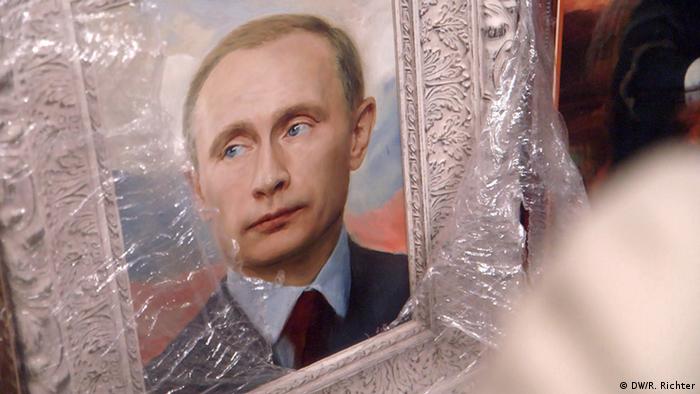 Putin's portrait appeared to approve of Safronov's praise for the president

Safronov is never bored. Hailing from a humble background in the small town of Ulyanovsk, he long became Russia's wealthiest and most renowned artist. His rise can be attributed to the nation's hunger for anything new during the fat 2000s. Safronov enjoys his reputation: He is a socialite, a most welcome guest and darling of society pages. He has met everyone from Sophia Loren to Mikhail Gorbachev and George W Bush to Bill Clinton.

"I paint faces that are interesting," Safronov says. "No one wants to see the lottery losers. But everyone wants to meet the winner. Putin is like that: a pro, a man, a patriot. He is someone I find interesting."

The winners of the new Russia live around the Patriarch Ponds in Moscow's "golden" quarter, a 10-minute walk from the Kremlin. People in this area pay as much for their residences as they would in London or Paris - where they also own real estate. They are at home here in their luxurious dwellings inside Moscow's Garden Ring. They do not deal with the nasty smells of the subway; their atmosphere is laden with the exhaust of the largest number of Mercedes-Benz S-Class models per square meter in the world.

At 800 square meters (8,600 square feet) and said to be worth $40 million (35.5 million euros), Safronov's gloomy neo-Gothic residence was built into a simple Soviet constructivist building that was erected in the 1920s - the perfect place for the artist to showcase his collection of rarities. "I attach particular importance to the authenticity of the objects," Safronov says as he puts a metal knight's helmet on his head.

I would like to know what Safronov needs that for - along with the French Napoleon table, the Roman frescoes and the valuable Russian icons. "Because it fits in well here," he says. He can obviously afford it; taste does not necessarily play a role.

Safronov is a hero of his time. While Russia was in a phase of upheaval in the 1990s, he seized the moment and has always managed to adapt. What is his style? It is a mix of everything. He himself calls it "dream vision." He earned most of his money from the portraits he painted of Arab kings, Central Asian rulers and Russian regional leaders – and, of course, Putin. He apparently knows the president, but he does not want to talk about him. He says he is not political, but he quietly, casually and markedly talks about politics.

"The West uses Russia as a deterrent, but that is wrong," Safronov says. "Russia remains an important part of this world. Without Russia, there is no Germany, no Poland and no Europe. The world cannot exist without Russia, just as the world cannot live without bees - although they do occasionally sting."

I ask Safronov about the upcoming parliamentary elections. "Insignificant," he says. The presidential election, set for 2018, is more important. Nonetheless, Safronov will cast his ballot in the parliamentary elections so that the United States and EU can finally see that Russia is invincible. "It will not become communist or European," Safronov says. "Russia has always lived according to its own laws and done things its own way."

Nikas Safronov excuses himself. Children are waiting on the rooftop. A dozen boys and girls have come to sketch with the master. Their subject is his rendering of the beautiful Siberian tiger in front of the Kremlin's churches.

Ernst Neizvestny, Russian sculptor who stood up to Khrushchev, dies at 91

He boldly confronted Soviet leader Nikita Khrushchev at a Moscow art show, but went on to design his memorial. Russian-born sculptor Ernst Neizvestny has passed away in New York. (10.08.2016)