Romania′s democracy in danger after Mihai Tudose resignation | Europe | News and current affairs from around the continent | DW | 16.01.2018 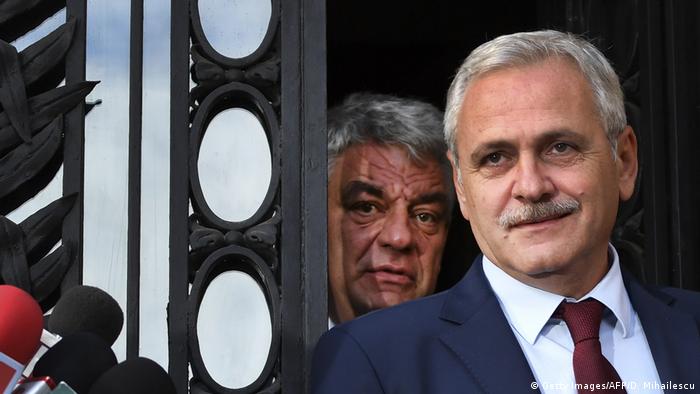 Tudose (l.) stood in the shadow of Social Democrat party boss Dragnea (r.) from the beginning of his short tenure as PM

Prime Minister Mihai Tudose has been forced out by the PSD as he lost a power struggle with the party boss. Liviu Dragnea rules over the party but is barred from political office because of a criminal conviction. (15.01.2018)

Rallies in Bucharest and other cities have taken aim at a law that will weaken efforts to root out corruption. The government says a new law will prevent the judiciary from pursuing a politically motivated agenda. (06.11.2017)

Opinion: A theater of the absurd in Bucharest

The governing coalition in Romania has ousted its own prime minister through a no-confidence vote. But the country's domestic political crisis is not likely to end anytime soon, writes DW's Robert Schwartz. (22.06.2017)

Romania’s ruling Social Democrats have unveiled proposed changes to the criminal code decriminalizing a range of corruption offenses. The PSD is revisiting proposals it failed to pass in March amid earlier mass protests. (27.12.2017)

Liviu Dragnea has appeared before Romanian prosecutors amid claims he illicitly obtained EU funds. His party's attempts this year to decriminalize graft offenses led to Romania's biggest protests since the communist era. (13.11.2017)

Romania's ex-economy minister has 10 days to win a vote of confidence for his policy program. Tudose's predecessor, Sorin Grindeanu, was ousted by his own Social Democrat Party after an internal power row. (26.06.2017)

Romania's parliament has dismissed Prime Minister Sorin Grindeanu after his party submitted a no-confidence vote. The party has said Grindeanu lost their support for failing to implement its reform program. (21.06.2017)

He certainly would not be available to serve as interim Prime Minister, Mihai Tudose said Monday when asked what was going to happen now in Romania. He was leaving with his "head held high," he said, just a day before his Japanese counterpart Shinzo Abe was scheduled to visit Romania.

His petulant demeanor in the wake of being fired by his party's executive committee comes as no surprise. The 50-year-old only managed for seven months to avoid his predecessor Sorin Grindeanu's fate.

Both had repeatedly dared to stand in the way of the Social Democratic Party's (PSD) increasingly controversial and powerful leader Liviu Dragnea. Both thwarted his favorite project, the judicial reforms that the opposition, the judiciary, civilian society, the EU and the US criticize as harmful to the constitutional state. And both ended up paying with their office for the short-term independence they enjoyed.

When Dragnea's leftwing populist party on Monday gave Tudose the boot, it marked a swift end to the power struggle that came to a head a few days ago when the PM called Interior Minister Carmen Dan – a longtime close ally of Dragnea – a liar and demanded she step down.

PSD leader and President of the Romanian House of Representatives, Dragnea by no means wanted to forgo yet another insider and government supporter: he is currently on a suspended sentence for election fraud, and has no access to the government himself.

At the same time, new mass protests loom on the horizon and there also might be snap elections. Control of the Interior Ministry seems to be of key importance to the strongman, who needs to keep up his tarnished authority in Bucharest. More important than political or economic stability, more important than a stable currency.

Three months ago, Tudose incurred the powerful politician's wrath by removing two of Dragnea's close friends from the cabinet. According to critics, he is doing what he can to dodge more convictions that could put a sudden end to his political career. He is suspected of having embezzled EU funds, forging documents and abuse of office. In December 2017, the wealthy oligarch whisked legislation through parliament that puts an end to the independence of the judiciary, sparking widespread protests. 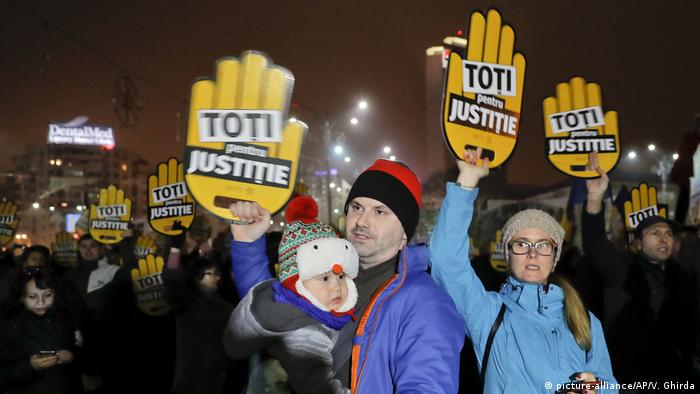 A threat to the constitutional state

Dragnea critics at home and abroad agree that politicizing the judiciary, greatly curtailing the powers of the police, of law enforcement and anti-corruption agencies would give Dragnea and his coalition partners a clean record. They would no longer have to fear criminal prosecution.

Neither the PSD leader nor his political cronies seem to care much that the constitutional state threatens to fall by the wayside. They all joyfully benefit from riding the slipstream in which the second-poorest country in the EU has been moving for months and years, far behind Poland and Hungary – EU states the West criticizes much more severely. The leadership elite, which resembles the oligarchy in Russia, hides in the countryside behind the bullied and synchronized media and their anti-Western conspiracy theories. According to the latter, either Jewish billionaire George Soros or an ominous, undefined "parallel state" are active in Romania to take power from Dragnea and his party.

Thanks to the course set in 2015 by the Dacian Ciolos administration, Romania still enjoys robust economic growth. But not much trickles down to the population; abject poverty is still widespread.

Discontent with poverty, corruption and lacking legal security – in particular among the new middle classes and potential investors – hasn't just put the brakes on new investment, but has also led experts and scientists to leave the country. The "brain drain" is not just tapping key human capital, but, buoyed by Russian propaganda, a waning sympathy for the EU and democracy is disappearing along with the emigrants.

President Johannis, who participated in pro-constitutional state mass demonstrations in Bucharest in early 2017, will have a hard time stemming this erosion of democracy. His powers are limited, and he can easily be deposed, a fact that members of the government have made clear more than once these past days.

On Tuesday, Johannis named Defense Minister Mihai Fifor as interim prime minister. It remains to be seen whether he will accept the PSD's proposal to nominate Dragnea ally Viorica Dancila for the position. The Romanian people, meanwhile, have hopes for a planned mass protest on Saturday and an audible interference by western heads of government like German Chancellor Angela Merkel and US President Donald Trump.