Romanian tabloids incite panic over refugees | Europe| News and current affairs from around the continent | DW | 29.09.2017

The number of refugees crossing the Black Sea to get to Romania has risen. The country's tabloid press is describing it as an "invasion." DW's Cristian Stefanescu reports from Bucharest. 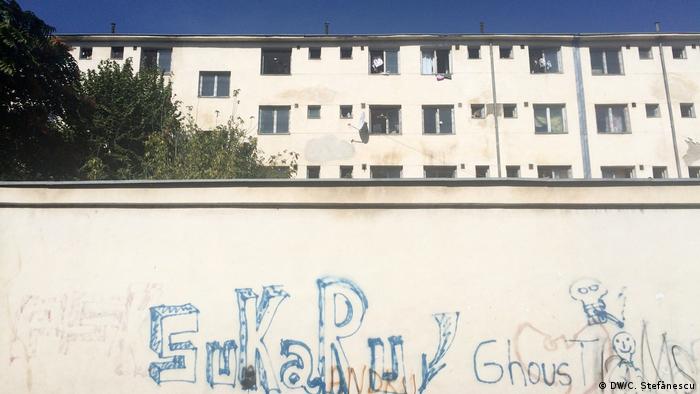 One of Romania's oldest refugee centers is located in Bucharest

The windows are barred, and there's a wall separating the refugee hostel and the other gray prefab blocks here in the Baicului district of Bucharest. The asylum seekers have to be back in their accommodation by 10:00 p.m. (1400 CST) at the latest. But even during the day the majority hardly ever leaves the building. It's very run-down – just like the other apartment blocks around here, where Romanians live. The whole area feels like a ghetto. The crucial difference is that, on the other side, only fly screens cover the windows.

A woman is standing at one of these windows; she introduces herself as Maria. Her apartment directly overlooks the refugee center. Asked about the prejudice and fear-mongering in the tabloid press, reports about refugees who bring nothing but chaos and filth, she shrugs. "Listen; it's always been dirty here. Two weeks ago some Romanian kids were throwing paper airplanes out of the windows; they're still down there."

As she speaks, a woman from one of the locals' apartment blocks is dumping empty bottles on the corner by the refugee center's yard. She disappears into a pub that looks like an improvised garage.

Fear of an 'invasion'

On the street you can't always distinguish between asylum seekers and locals. A few of them are sitting on a blanket behind a big trashcan, speaking timidly, in monosyllables. Just 100 meters further on is a playground. In the middle are three small cannons. Ten years ago, when it was opened by the local authorities, it's unlikely anyone imagined that one day refugee children would play here – children who have traveled thousands of kilometers (miles) to escape war. 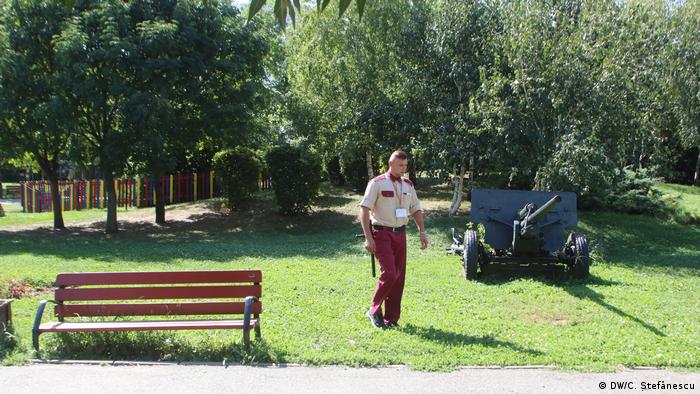 Cannons as decoration: A park near a refugee center in Bucharest

According to the Romanian authorities, 482 refugees have crossed the Black Sea and arrived in the country in the past 18 months. That's considerably more than in other periods. The tabloid press is stirring up panic: "Romania is being invaded by refugees – UN confirms it!" was the headline in one Bucharest newspaper this week. It was accompanied by a cover photo of a crowd of men with outstretched arms.

The picture, however, had nothing to do with current events. It had been taken from the Russian media, and was, ironically, originally published in a 2011 book about illegal workers in Italy. The Romanian UN representative made absolutely no reference to an "invasion." What he actually said, at the opening of a new refugee center in the port town of Constanta on the Black Sea, was that the number of refugees was not large, and that accommodating and looking after them was "perfectly manageable."

No 'wave' of refugees

Generally speaking, only about 10 percent of those who apply for asylum in Romania are successful, says Razvan Samoila from the Romanian NGO Arca, which supports refugees and migrants. An average of 400 applications for asylum are made in Romania each year, he says. Sixty-nine Iraqis first crossed the Black Sea from Turkey in early August, arriving in the Romanian port of Mangalia crammed into a tiny boat that belonged to two human traffickers, a Bulgarian and a Cypriot. The Romanian coastguard recently saved 150 refugees from a boat built for a maximum of 40: The waves were so high that even the border police had difficulty reaching the fishing boat. 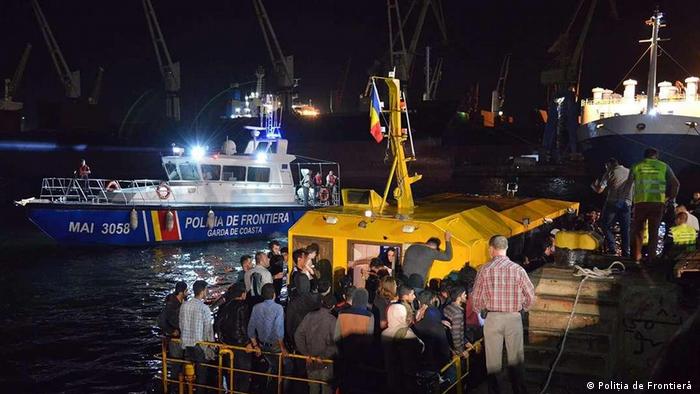 "We can't yet describe this as a wave of refugees," says Fabia Badila, the spokesman of the Romanian border guard. "These are refugees who are fighting with the waves." So far no one has died making the crossing, he says – but now that summer is over, the sea will get more and more dangerous.

Returning voluntarily from Romania to Syria

Those who make it to Romania often want to travel on – to Western Europe. Half of all the illegal migrants were picked up by Romanian police on entering the country; the other half were caught as they attempted to leave, predominantly along the Hungarian border. Romania is one of the poorest EU countries. Here, they receive only 15 lei per day (about three euros and 30 cents) while they wait for a decision on their asylum application. Refugees who are granted asylum must get by without even this meager state contribution after a maximum of one year. Arca's Samoila isn't surprised that many don't want to stay in Romania. "They don't find what they were looking for. Many of them feel isolated and become depressed." Samoila has also encountered Syrians and Iraqis who have since left Romania and gone back to their homeland.

Those who stay integrate into Romanian society, the aid worker says. Among the Syrian refugees there are doctors who studied medicine in Romania before 1989, back when the communist dictator Nicolae Ceausescu cultivated close relations with Arab autocrats. Nowadays, though, they're not allowed to practice their profession in Romania, even though the country has a severe lack of doctors. This is why refugee Syrian doctors – like their often underpaid Romanian colleagues – are looking elsewhere for a better future: to Western Europe.