The US's top diplomat said the scenes of persecution were "just horrific." He has urged the government of Aung San Suu Kyi to permit a credible investigation into what the UN has called "textbook ethnic cleansing." 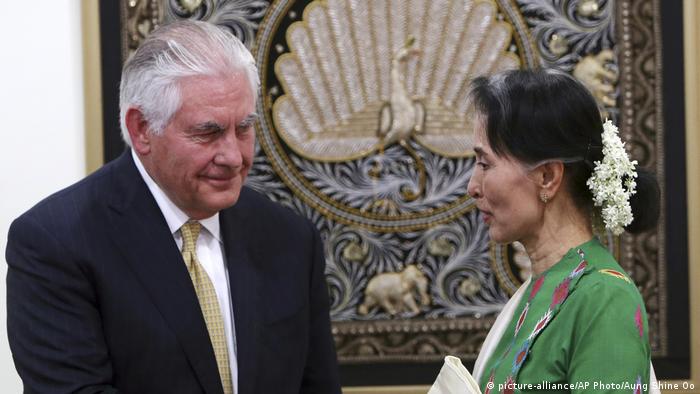 US Secretary of State Rex Tillerson called for an independent investigation into alleged Myanmar atrocities against Rohingya Muslims during a joint press conference on Wednesday with the country's civilian leader, Aung San Suu Kyi.

"The recent serious allegations of abuses in Rakhine state demand a credible and impartial investigation and those who commit human rights abuses or violations must be held accountable," he said. "The scenes of what occurred out there are just horrific."

Over 600,000 Rohingya civilians have fled Rakhine state in the northwestern Myanmar, a predominantly Buddhist country, to neighboring Bangladesh since security forces started a crackdown at the end of August.

Rohingya in refugee camps in Bangladesh have reported of Myanmar soldiers committing mass murder and rape against civilians.

Military leaders have said they are only targeting Rohingya insurgents. Ahead of Tillerson's arrival, a senior commander said there was no evidence of security forces using "excessive force" in Rakhine.

The top US diplomat also said broad US sanctions against Myanmar was "not something that I'd think would be advisable at this time."

"We want to see Myanmar succeed," he said. "You can't just impose sanctions and say therefore the crisis is over."

Senior US lawmakers have been mulling whether to pass targeted military sanctions against the country in response to the alleged atrocities.

Tillerson said he would consider targeted sanctions against individuals if the US saw credible proof of their involvement in any crimes.

'I have not been silent'

At the joint press conference, Suu Kyi defended herself against international criticism that she had not done enough to reign in the military.

The 72-year-old Nobel Peace Prize winner has not publically criticized military leaders who also rule Myanmar as part of a power sharing deal.

Her government has previously blocked UN monitors into Rakhine state to investigate the alleged persecution, despite the UN calling military actions there a "a textbook example of ethnic cleansing."