The UN Security Council has condemned the violence that prompted the exodus of over 600,000 Rohingya into Bangladesh in recent months. A stronger resolution condemning the military excesses was blocked by China. 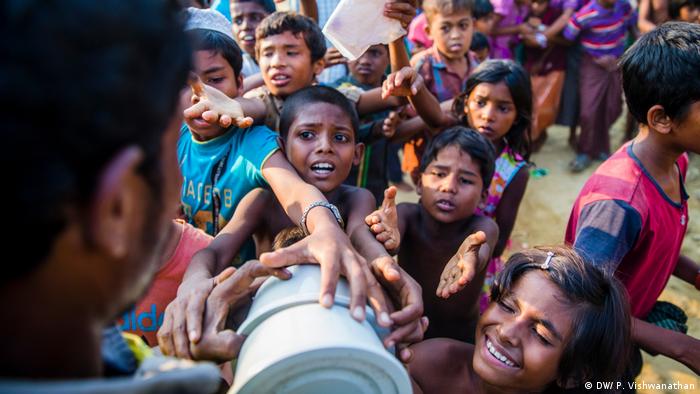 The United Nations Security Council on Monday unanimously approved a strongly worded statement on Monday, urging Myanmar authorities to "ensure no further excessive use of military force in Rakhine State."

The presidential statement condemned the violence in the state that has led to more than 600,000 Rohingya flee to bordering Bangladesh to seek protection after an insurgent attack on security forces on August 25 in Rakhine sparked off a brutal military counteroffensive.

The United Nations has denounced the violence as a "textbook example of ethnic cleansing," a charge that Myanmar has denied.

The Security Council on Monday expressed "grave concern over reports of human rights violations and abuses in Rakhine State, including by the Myanmar security forces, in particular against persons belonging to the Rohingya community."

"The Security Council calls upon the Government of Myanmar to ensure no further excessive use of military force in Rakhine State, to restore civilian administration and apply the rule of law, and to take immediate steps in accordance with their obligations and commitments to respect human rights," it said.

The council called on Myanmar to address the root causes of the crisis "without discrimination and regardless of ethnicity or religion, including by allowing freedom of movement, equal access to basic services and equal access to full citizenship for all individuals."

It further demanded Myanmar to allow immediate, safe and unhindered humanitarian aid and media access to Rakhine. UN Secretary-General Antonio Guterres is to report back in 30 days on the situation.

Rohingya people, a vast majority of whom are Muslim, have faced years of persecution in Myanmar. They have been denied citizenship rights and are viewed by the local authorities as illegal immigrants from Bangladesh. Myanmar's Buddhist majority is often accused of subjecting them to discrimination and violence.

Western nations wanted a stronger resolution but the move was scuttled by China, a neighbor and ally of Myanmar. Resolutions are legally binding unlike a statement.

To bring China onboard the 15-member body instead unanimously agreed on a formal statement.

The language on citizenship rights was watered down, as well as a demand that Myanmar allow a UN human rights mission into the country, diplomats said.

Myanmar denounced the statement, saying it was "based on accusations and falsely claimed evidence."

"It exerts undue political pressure on Myanmar," Myanmar's ambassador Hau Do Suan said. "It fails to give sufficient recognition to the government of Myanmar for its efforts to address the challenges in Rakhine State."

Bangladesh welcomed the statement, saying it will be reassuring for the displaced Rohingya that "the council remains engaged with their prolonged suffering, insecurity and uncertainty."

Myanmar's leader has visited Rakhine for the first time since a bloody crackdown created vast numbers of refugees. Myanmar's government says it has begun a repatriation plan but thousands of refugees continue to flee. (02.11.2017)

US holds Myanmar military responsible for crackdown on Rohingya Muslims

Secretary of State Rex Tillerson has said the US holds Myanmar's military leadership responsible for the crackdown on the Rohingya Muslim minority. Myanmar has denied allegations of ethnic cleansing and genocide. (19.10.2017)

Rohingya crisis - 'These people need all the help they can get'

As the number of Rohingya refugees soars, Monday's donor conference in Geneva aims to secure extra funding to provide urgently needed aid. DW spoke to UNOCHA's Jens Laerke about the global response to the problem. (23.10.2017)