The Oxford College where Myanmar leader Aung San Suu Kyi studied has taken her portrait down from public display. This follows international criticism over her role in her country’s humanitarian crisis. 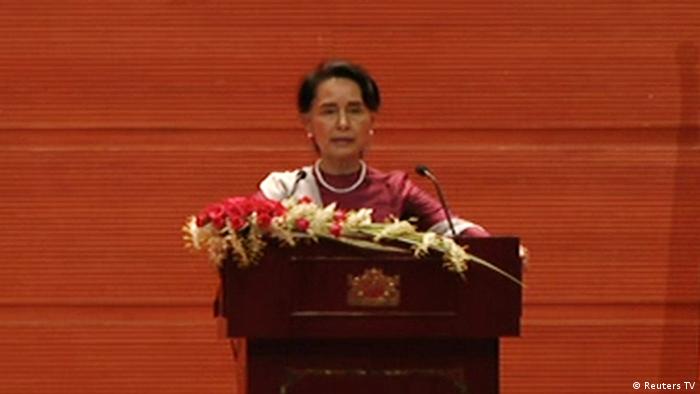 St Hugh's College at England's Oxford University said on Thursday that it had decided to remove the painting of the Nobel laureate from its main entrance, the UK daily The Guardian reported.

"The college received the gift of a new painting earlier this month which will be exhibited for a period. The painting of Aung San Suu Kyi has, meanwhile, been moved to storage," St Hugh's said in a statement.

In a speech last week, the Nobel Prize winner condemned human rights abuses but did not blame the army or address allegations of ethnic cleansing.

Violence in Myanmar has seen more than 400,000 Rohingya Muslims flee to neighboring Bangladesh. Myanmar's de facto leader has been criticized for failing to address UN allegations of ethnic cleansing.

UK under pressure to act

UK Prime Minister Theresa May – also an alumni of the college - has been under pressure to take action after evidence emerged that Myanmar's military forces were driving hundreds of thousands of Rohingya out of the country.

Earlier this month May said: "Aung San Suu Kyi and the Burmese government need to make it very clear that the military action should stop."

Oxford council is to vote next week on stripping Aung San Suu Kyi of the freedom of the city it bestowed on her in 1997.

Unison, the second-largest trade union in the UK, suspended Suu Kyi's membership and called on her to "respond to international pressure."

Inside Europe: 'Rhodes must fall'

Inside Europe: 'Rhodes must fall'

Bristol University is reviewing an honorary degree it gave her in 1998 and the student union at the London School of Economics has said it will strip her of her honorary presidency.

She graduated from St Hugh's College in 1967 and was awarded an honorary degree in June 2012, which the university said it was not considering removing.

The move was described as "cowardly" by the Burma Campaign UK group, which urged the college to go further.

"This seems a rather cowardly action by St Hugh's. If they have taken down the portrait because of Aung San Suu Kyi defending the Burmese military as they commit ethnic cleansing against the Rohingya they should say so and write to her urging her to respect human rights," Mark Farmaner, the campaign's director, said.

Aung San Suu Kyi won a Nobel Peace Prize in 1991 and despite being barred from running for president she won a decisive victory in the country's 2015 election, and was eventually given a title of state counselor.

In 2012 Aung San Suu Kyi was granted an honorary doctorate from Oxford University and held her 67th birthday party at the college, where she studied politics, philosophy and economics between 1964 and 1967.

Founded in 1886, St Hugh's is one of the largest colleges at the university, with about 800 students.

The issue of removing public statues and images of controversial historical figures was highlighted in the UK in early 2016, when Oriel College in Oxford decided to keep its statue of British tycoon and colonial politician Cecil Rhodes, despite the Rhodes Must Fall campaign, a kind of campaign that is increasingly common in the US.

Rohingya people in Myanmar: what you need to know

Hundreds of University of Cape Town students cheered as workmen removed a decades-old statue of British imperialist Cecil Rhodes after weeks of protests. The scholars described the statue as a symbol of white privilege. (09.04.2015)

Hundreds of thousands of Rohingya have fled violence in Myanmar to face misery in Bangladesh. UN Secretary-General Antonio Guterres has warned of a "horrible" tragedy if Myanmar's leader Suu Kyi fails to act soon. (17.09.2017)