Oxford decision to keep Rhodes statue sparks Twitter debate | News and current affairs from Germany and around the world | DW | 29.01.2016

The university's decision to keep Rhodes' statue triggered mixed reactions online. While some argue it is a reminder of Britain’s dark colonial past, others think it should be kept in place for this exact reason. 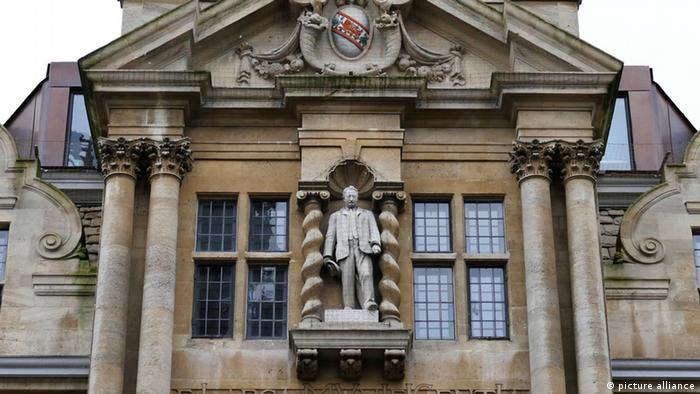 The University of Oxford announced today that it will keep a statue of British imperialist Cecil Rhodes (1853 - 1902) on the grounds of Oriel College, despite the pressure of a student-led campaign which had used social media to denounce the statue’s significane with the hashtag #RhodesMustFall.

This was inspired by a similar movement that had been successful in South Africa, where it led to the removal of a statue honoring the British colonial figure in the University of Cape Town, in April 2015.

Following Oxford’s announcement, reactions flowed on Twitter, reflecting the various points of view that had been expressed throughout both campaigns, which had led to a debtate on racism and the legacy of colonialism in various educational institutions.

Supporters of the #RhodesMustFall campaign expressed disappointment, with some claiming racism also played a part in the decision. Quotes from Rhodes himself were being used to get the point of the protests across.

However, other users felt that removing the statue would be the equivalent of erasing a part of Britain's history that needs to be remembered. Some compared the campaign's goals to those the "Islamic State" organization when it destroyed ancient cities and monuments in Syria and Iraq.

Others voiced their opinions against Rhodes' legacy, but maintained the statue should be kept exactly because of that.

This argument was rejected in some tweets that used historical examples of statue removals, such as the pulling down of Lenin statues in various former Soviet republics and satellite states, as a gesture of liberation from totalitarian regimes.

There have been claims the decision is more about funding than it is about morality. Rhodes, himself an Oxford graduate, established a now widely acclaimed scholarship in his will that allows over 80 applicants to study in the British institution each year and represents a steady source of income for the institution.

Moreover, British paper "The Daily Telegraph" revealed a leaked document that allegedly shows many donors and potential donors threatened to pull back their funds if the university decided to remove the statue. Though Oxford's managing group had previously denied that finances were a deciding factor in the discussion that led to the final decision, users on social media were not fazed.

Hundreds of University of Cape Town students cheered as workmen removed a decades-old statue of British imperialist Cecil Rhodes after weeks of protests. The scholars described the statue as a symbol of white privilege. (09.04.2015)

University of Cape Town students have called for the removal of a statue of British colonialist Cecil John Rhodes from university grounds. The event reveals deeper discontent with South Africa's state of affairs. (21.03.2015)