Hundreds of University of Cape Town students cheered as workmen removed a decades-old statue of British imperialist Cecil Rhodes after weeks of protests. The scholars described the statue as a symbol of white privilege. 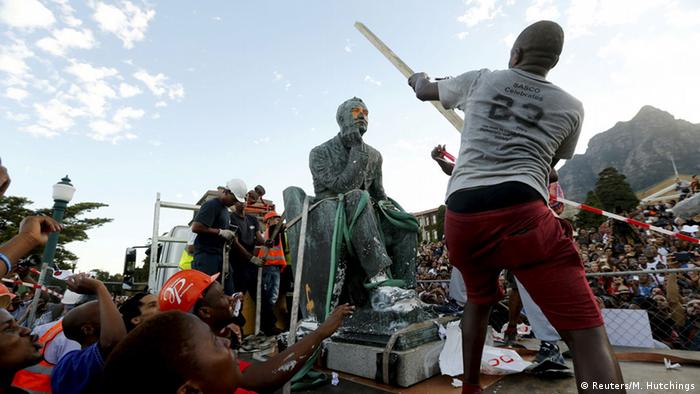 The statue, which had been covered for several weeks, was removed Thursday after weeks of student rallies by both white and black students calling for it to be taken away.

Covered in graffiti, the statue was lifted by crane onto a truck as thousands of students looked on.

Some onlookers climbed onto the truck to place a bucket on the figure's head and wrap tape around the face.

"This represents a good step forward for transformation and it shows if something is wrong you really do have the power to change it," Tinashe Sibeko, a politics student at the university told the Reuters news agency.

"For the black mentality in general it says that you don't just have to accept the status quo, you can transform and change things for the better," he added.

The demonstrators, known as the Rhodes Must Fall Movement, said the statue, which overlooked the university grounds, was a constant reminder of the few changes the university had undergone since the end of apartheid. Many of the faculty staff, the group said, are white academics.

"The statue has great symbolic power, it glorifies a mass-murderer who exploited black labor and stole land from indigenous people," the group's online petition which was signed by more than 1,550 supporters read.

The movement also called for the removal of all statues and plaques "celebrating white supremacists," and more black South African academic staff.

Students and staff on the university's governing board voted Wednesday to remove the Rhodes statue, promising to store it safely.

Members of counter movement, Rhodes Must Stay, argued the statue should be protected as it was symbolic of South Africa's heritage.

Rhodes, a businessman and politician, made his fortune mining and acquiring land in South Africa.

The movement to remove statues of white figureheads has prompted backlash from Afrikaner activists who claim racism towards a white minority is going unreported.

"I am convinced the tears that have allegedly been shed as a result of the 'pain' this statue is causing are a disingenuous attempt to hide a racist agenda that results from the double standards in post-1994 South Africa."

University of Cape Town students have called for the removal of a statue of British colonialist Cecil John Rhodes from university grounds. The event reveals deeper discontent with South Africa's state of affairs. (21.03.2015)