Most American soldiers stationed at the Balad base had already left amid soaring tensions between Washington and Tehran. Iraq's military said four local soldiers were wounded in the attack. 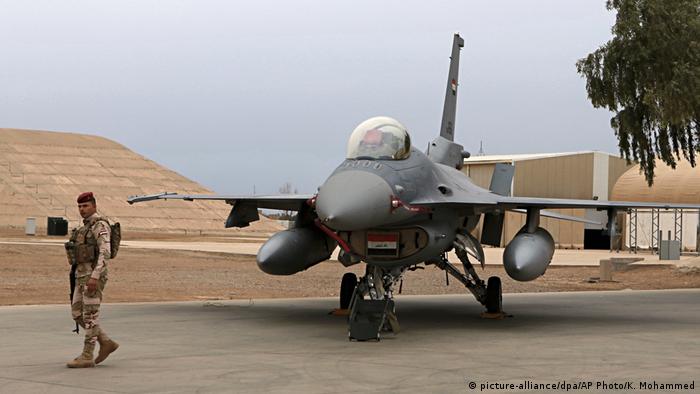 The base, which lies about 80 kilometers (50 miles) north of the capital, also houses US troops, but most of the Americans stationed there had already been pulled out amid rising tensions in the region between the US and Iran.

"There are American experts, trainers and advisers at the base,'' said one Iraqi defense official. Defense officials would only speak to the press on condition of anonymity.

US Secretary of State Mike Pompeo said he was "outraged" by reports of the attack.

"These continued violations of Iraq's sovereignty by groups not loyal to the Iraqi government must end," he added in a second tweet.

A statement from the Iraqi military said eight Katyusha rockets had been fired at the Balad base in Sunday's strike, hitting the runway and gate. There has been no claim of responsibility for the attack.

One air force officer and three enlisted men, all Iraqis, were wounded, but none were killed.

Tehran launched missile attacks on American targets in Iraq earlier this week in response to the US killing of Iranian General Qassem Soleimani in Baghdad on January 3.

A military source cited by the AFP news agency said "there are no more than 15 US soldiers and a single plane at [Balad]," because the majority of US advisers and other personnel had been evacuated.

Washington and Baghdad should not discuss troop withdrawal, the US State Department has said, refusing parliament's request for US soldiers to leave. Protesters in Iraq urged both the US and Iran to stop their meddling. (10.01.2020)