Refugees vanish from German centers | Germany| News and in-depth reporting from Berlin and beyond | DW | 02.11.2015

Over the past few months, hundreds of refugees have gone missing from shelters, often before they were registered. Their disappearances are leaving the authorities clueless as to their whereabouts. 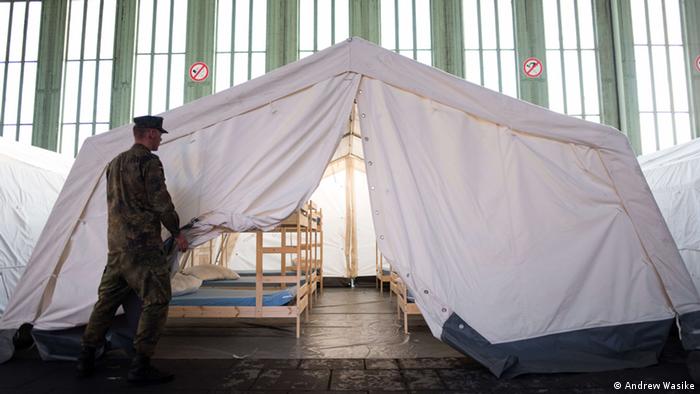 It's not the first time refugees disappear without a trace from emergency housing in Germany, but the state of Lower Saxony recently faced an unusually high figure.

About 700 of roughly 4,000 asylum seekers put up by the northern state disappeared last month, according to a state-wide survey by the "Neue Osnabrücker Zeitung" newspaper. Many hadn't even been registered yet - the first step in asylum proceedings. The authorities don't know who they are or where they might have gone.

The same has been happening, though to a lesser degree, in refugee centers across the nation in September and October.

They have the right to move freely and leave the shelters, Lower Saxony Interior Ministry spokesman Matthias Eichler told DW.

"So we can't say how many people move on on their own initiative."

But this new aspect to the refugee crisis has not gone unnoticed.

The refugees' disappearance is a sign of the state's "losing control," warned Jochen Oltmer, a migration expert at the University of Osnabrück.

German law stipulates that refugees must be registered as soon as they enter Germany. In practice, with the many thousands of asylum-seekers pouring into the country on a daily basis, the initial registration process by the country's border police is hopelessly backlogged.

The refugees don't leave us a note, we have no idea what motivates them to leave," Oltmer told DW.

Perhaps some refugees are reluctant to stay in the rural areas they are taken to, or they join relatives and friends elsewhere in Germany or even in another country, or move on to find more attractive locations. Authorities say there is no legal basis to retain the asylum-seekers. Security staff in the shelters don't stop them from leaving the centers, either.

The migration expert questioned Germany's mode of distributing the refugees as a process that might hinder integration and make networking more difficult. After all, Oltmer pointed out, networks are immensely important for refugees, friends or family who might live in Germany already, who can help with the authorities and in general "help make it easier to settle."

It's unlikely to be a security problem, the Osnabrück University professor said, adding that most refugees aren't consciously trying to avoid registration.

But some refugees may be confused as to their whereabouts.

The newcomers often don't know where they have been taken once they've entered Germany, says a spokesman for the town of Delmenhorst, so authorities there have put up maps of Germany in the shelters to help the refugees orient themselves.

If they leave on their own without proper registration, however, and police stop them, their status is that of illegal immigrant, and the entire registration process begins anew.

As a consequence, registration needs to be much more speedy in the interest of all parties concerned, Oltmer said: to put the state back in control, give the refugees the security of knowing their future status and to give the municipalities planning reliability.

Assailants wielding baseball bats attacked asylum seekers in Magdeburg, while other migrants were harassed and beaten in the German towns of Wismar and Jena, police say. Refugee homes were also hit in arson attacks. (01.11.2015)

My piece of hope: Syrian refugees carry memories of home

Their flight from Syria was an absolute nightmare - yet this family still manages to smile. They would be even happier if the father could get in touch with them and join them. (30.10.2015)