Refugees flee US on foot, seek safety in Canada | News and current affairs from Germany and around the world | DW | 13.02.2017

Refugees flee US on foot, seek safety in Canada

Canada has seen a surge of refugees crossing into the country illegally from the US. Advocates say the number will rise as fears grow over President Donald Trump’s policies. Jillian Kestler-D'Amours reports from Toronto. 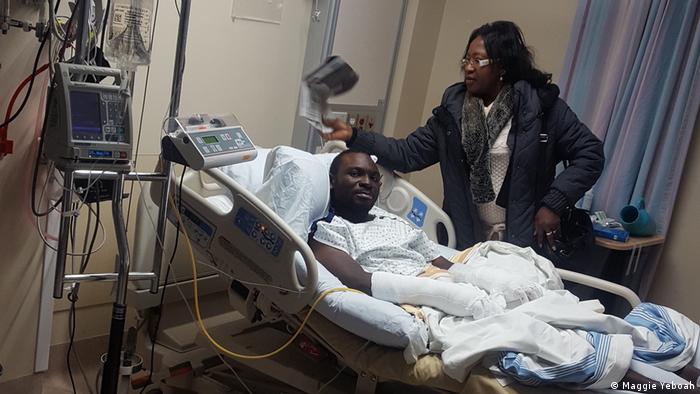 Dozens of families, women and young children, are making the journey in blistering cold and waist-high snow, while young men have been stranded for hours and lost several fingers and toes to frostbite.

They are all among a rising number of refugee claimants illegally crossing into Canada on foot from the United States, which many now say they feel is no longer safe under the administration of US President Donald Trump.

"The concern really comes from the fact that people are walking across in very, very frigid winter weather, across deep snow, in fields, and really risking their health and their safety," said Rita Chahal, executive director of the Manitoba Interfaith Immigration Council, a non-profit organisation that assists refugees and immigrants in the province.

Chahal said about 300 refugee claimants that have entered Canada without legal permits have made in-country applications for protection in Manitoba since last April.

In previous years, 70 refugee claimants in a similar period would have been a high number, she told DW.

While the reason for the surge is unclear, Chahal said many people say they feared being deported from the US back to their home countries, or felt they wouldn't receive a fair asylum hearing.

Others "are concerned about the political climate and the social climate within the US and how they might be treated there," she said.

Most asylum seekers cross into Manitoba near the small town of Emerson, about 110 kilometers south of Winnipeg, the provincial capital and its largest city. 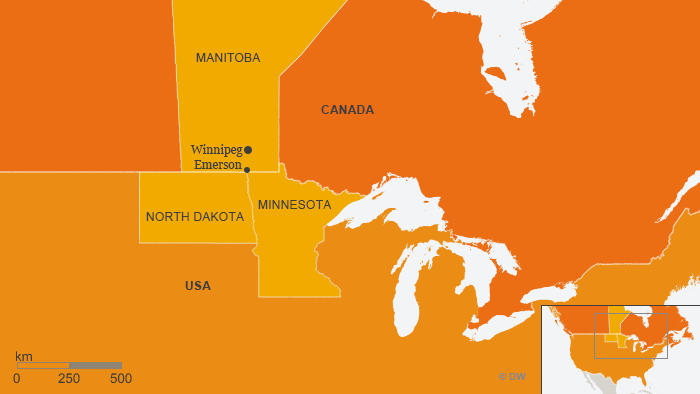 The US states of Minnesota and North Dakota are across the border from Emerson, which has a population of about 700 residents.

Twenty-two refugees crossed into Canada near Emerson over the first weekend of February, according to the national police service (RCMP), while 21 others made it across last week.

Asylum seekers are also crossing at other points along the porous, nearly 9,000-kilometer US-Canada border: the RCMP intercepted 823 refugee claimants in the province of Quebec between Apr. 1 and Nov. 30 last year, according to Canada Border Services Agency (CBSA) figures.

Most asylum seekers arriving in Manitoba are Somali citizens, followed by Eritrea and Djibouti passport holders, according to CBSA data. In Quebec, most are originally from Eritrea, Sudan and Syria.

But so many asylum seekers are crossing over near Emerson that the town organized an emergency meeting with the RCMP and CBSA last week. "Safety was the biggest [concern]," Greg Janzen, the town's top official, said after the meeting. "Now we know the protocol if we get an influx of people… The governments have been very supportive in this whole issue."

Maggie Yeboah is a social worker and president of the Ghanaian Union of Manitoba. She said about 30 Ghanaian refugee claimants have walked over the US border into Manitoba in recent months.

Most of the men did not set out to come to Canada, Yeboah said, but many fled persecution and violence related to their sexual orientation in Ghana. Male homosexuality is illegal under the country's penal code.

"They are being persecuted or being attacked back home in Ghana because of their sexual orientation," she told DW.

Yeboah said many of the men were advised to take a bus to Minneapolis, Minnesota, and a taxi from Minneapolis to the US-Canada border. From there, they were told they could walk into Canadian territory. 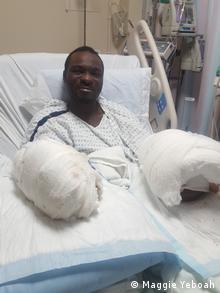 Ghanaian Seidu Mohammed's fingers had to be amputated due to the severe frostbite he developed crossing into Canada.

"It's not as easy as people think or people say, and they did not set out to come to Canada the wrong way, or [to] jump over the [border]. They thought they were going to [stay in] America, where they would be safe or where they would be welcomed. But they realised that it's not like that … so they took the chance," she said.

Janet Dench, executive director of the Canadian Council for Refugees, said asylum seekers are forced to take dangerous routes into Canada due to a deal that came into force in 2004 known as the Canada-US Safe Third Country Agreement (STCA).

The agreement means that most asylum seekers applying for protection in Canada at a US-Canada border crossing will be immediately sent back to the US, which Canada deems a safe country.

But the agreement does not apply to anyone who is inside Canada, and the Immigration and Refugee Board of Canada will likely hear their refugee claim.

The agreement "prevents people from applying in a safe and orderly way at the border points," Dench told DW.

The CCR and other human rights groups, including Amnesty International Canada and the Canadian Civil Liberties Association, have long called on Canada to rescind the agreement.

They say it's especially crucial in light of US President Donald Trump's travel ban on immigrants and refugees from seven countries in the Middle East and Africa, and general policies towards refugees.

The order has been challenged as unconstitutional, and as of last week, a federal court has upheld a stay on its implementation.

But the Trump administration's policies more generally toward refugees have raised concern about whether the US still meets the requirements in Canadian law to be considered safe.

"From our perspective, Canada should withdraw from the agreement. We were never in favour of the agreement and the irregular crossings [are] one of the very obvious and known consequences," Dench said.

US no longer safe for refugees

Amnesty International Canada Executive Director Alex Neve agreed. "It is, to put it generously, fiction to continue to believe that the United States at this time is safe for refugees."

Trump's executive order deals with refugee resettlement, and does not affect the US asylum program, while Canada's Immigration and Refugee Protection Act involves the continual review of whether conditions that led a country to be designated as safe continue to be met, said a ministry spokesperson.

"The STCA remains an important tool for Canada and the US to work together on the orderly handling of refugee claims made in our countries," Spokesperson Nancy Caron told DW in an emailed statement. "We continue to monitor the situation."

Meanwhile, Chahal said while it's hard to speculate, the general sense is that the number of asylum seekers crossing into Canada illegally will continue to increase, especially as the weather gets warmer.