Refugees: boon or bane for the German economy? | Business | Economy and finance news from a German perspective | DW | 13.11.2015

Refugees: boon or bane for the German economy?

While some worry the costs of the refugee crisis could leave an irreparable dent in Germany's state coffers, some economist argue they might just save the economy. But for that to happen, lawmakers must wise up. 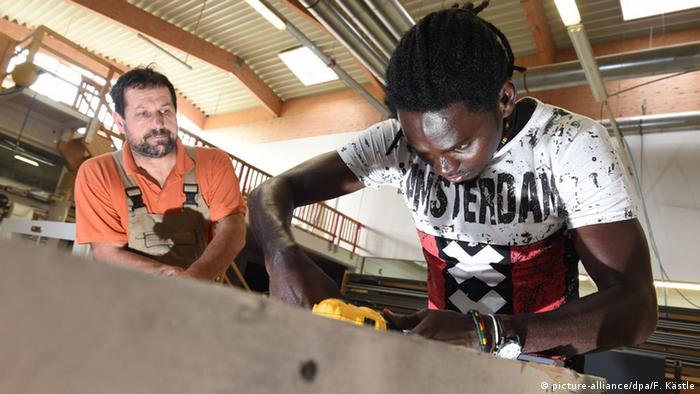 The costs of the refugee crisis keep rising. The price for providing housing, food, day care, education, German courses and general administration for the hundreds of thousand of new migrants will set Germany's federal and state governments back as much as 20 billion euros ($21.6 billion) annually, according to experts. As a rule of thumb, the state pays around 12,000 euros per refugee, estimates the German Institute for Economic Research (DIW) in Berlin.

But it's not so black and white, cautions DIW chief Marcel Fratzscher, stressing the importance of distinguishing between the short- and the long-term. "It irks me, when we talk about refugees only in terms of added costs," he told DW.

For Fratzscher, the cost-benefit analysis is not unlike the money spent on day care and schools: "These are long-term investments that take 20 to 30 years to yield a rate of return for the economy. It's the same with refugees. We ought to see them as an investment."

Jobs for Refugees - who is needed in Germany?

In fact, said the economist, much of the money spent on refugees ultimately flows back into the economy when they buy groceries and other goods - and it is primarily German companies and employers that profit. Viewed in this light, the financial aid refugees receive can be seen as a cash injection for the German economy at large.

While there is some disagreement as to the financial costs of the refugee crisis, this much, at least, experts can agree on: The sooner the newcomers are integrated into the labor force, the better. Using empirical evidence, the DIW calculated the costs and benefits under three different scenarios.

Positive, negative or neutral: All three scenarios make clear the question is not if the economic benefits of immigration will outweigh the costs, the question is how soon.

"Most of the refugees [arriving in Germany] are very young, meaning they will contribute 40 to 50 years of their lives to the country's workforce," said Fratzscher. "Our calculations show that the financial benefits of the refugees could exceed the costs after as little as five to six years." 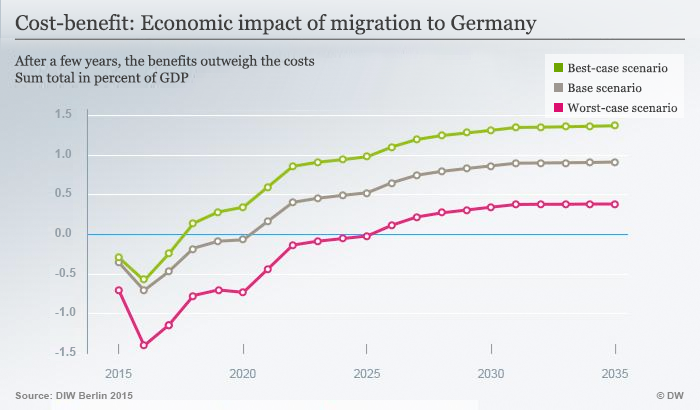 The DIW chief isn't the only one who sees the massive influx of young migrants as a potential gold mine in the face of an otherwise ageing population. According to David Folkerts-Landau, head of the Frankfurt-based think tank Deutsche Bank Research, without much-needed immigration, German GDP stands to shrink to 0.5 percent per year, down from the current annual average of 1.5 percent.

"Successfully integrating [the refugees] would be a win-win situation, and allow Germany to cement its position as Europe's economic powerhouse," said Folkerts-Landau.

However, some experts are less optimistic. World-renowned economist and president of the Mannheim Center for European Economic Research (ZEW), Clemens Fuest, predicts it is going to be difficult to integrate refugees into the German labor market and society.

"The upside is that we will get more young people, [which will help balance out] our age distribution, and that they'll come with fresh, new ideas. But the downside is that Germany depends on taxes to maintain its extensive welfare system, and it will take years for many of the refugees to earn enough to make up for what they cost the state," Fuest told DW.

One way of lowering the barriers to the labor market and speed up integration, he argues, would be to ease the minimum wage requirement for refugees - a proposal backed earlier this week by the German government's panel of economic advisers.

Regardless of the price tag, the ZEW chief stressed that Germany has a moral obligation to take in the refugees. 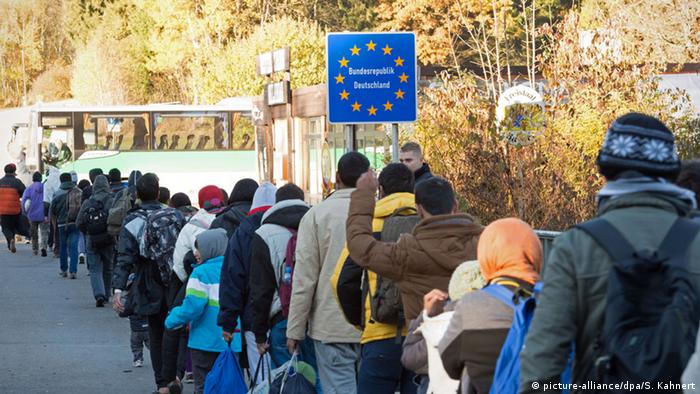 ZEW's Clemens Fuest says supporting refugees is not about turning a profit, it is about helping people in a desperate situation: "This won't make us richer - at least not in a material way."

This brings us to that elusive, new national virtue Chancellor Angela Merkel coined in a key summer speech on the refugee crisis: "flexibility." For Fuest, one of the most positive outcomes of the refugee crisis would be, if it forced Germans to reassess whether their welfare system is set up in the best way possible, whether the labor market works the way it is supposed to, and whether maybe, just maybe, greater flexibility would actually do the country some good.

"Sadly, I fear we won't change and that we won't [use this opportunity to] take on any significant reforms," reflected the former Oxford professor. "And as a result, the refugees will join the ranks of the long-term unemployed and end up stranded in the German welfare system."

To prevent such a bleak scenario from becoming reality, Fuest says German lawmakers must become more prescient and pro-active in how they deal with the crisis. But, he adds, in the current political climate, there's little hope cooler heads will prevail.

Germany's Ifo economic think tank has more than doubled its estimate of what the influx of refugees will cost the country as it expects higher numbers of asylum-seekers and additional outlays already this year. (10.11.2015)