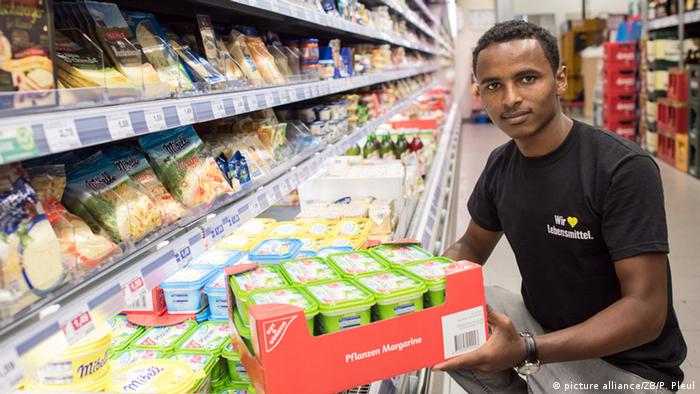 The German economy is strong enough to stem the costs of the refugee crisis, the country's economic "wise men" said in their annual report released Wednesday. But they also warned that the country's minimum wage, introduced just this year, was a stumbling block for newcomers trying to gain a foothold on the job market.

The five-member panel, which is tasked with evaluating federal economic policies, suggested suspending the minimum wage of 8.50 euros ($9.1) for refugees to make them more attractive to employers.

"The minimum wage is likely to pose a barrier to entry [into the job market] for many refugees. Considering the growing supply of low-wage labor the minimum wage should under no circumstance be raised," the group, officially known as the German Council of Economic Experts (GCEE), cautioned.

The government must make removing such barriers a top priority, the advisers said, arguing this would help newcomers better integrate into German society. In a September report, the Organisation for Economic Co-operation and Development (OECD) echoed this sentiment, saying that providing easy access to the job market was the best way to turn refugees into a boon, not a burden, for host countries.

Germany alone is expected to receive at least 800,000, but probably closer to one million, new migrants this year.

The GCEE calculated the refugee crisis would cost Germany 22.6 billion euros alone this year, including additional public outlays of up to 8.3 billion euros. That figure is even higher than the 21.1-billion-euro estimate the Munich-based Ifo institute announced on Tuesday, which was almost double its previous projection.

"Considering the healthy state of the [federal and regional] budgets," however, the government's top economists deemed these costs "manageable." The panel forecast GDP growth of 1.7 percent this year, or a surplus of 21 billion euros, followed by a slight drop to 1.6 percent in 2016.

But unless authorities do away with much of the red tape, the price tag could balloon even further.

"Lengthier asylum procedures and a deterioration in labour market integration could boost the costs significantly," said Christoph Schmidt, head of the panel.

If handled correctly, however, the new migrants could also help fuel Europe's biggest economic engine, they said. Experts have long warned that Germany is likely to lose steam as the population ages, with fewer, qualified young workers to replace them. Qualified workers, escaping war-torn countries such as Afghanistan and Syria, could help reverse that trend.

"The migration of refugees brings a significant potential for education and qualification with it," the authors wrote in their annual autumn report. "The effects on the number of workers, and thus the country's production potential, could be moderate in the medium term."

As it stands, the group warned the influx of unskilled workers was likely to add to the lines at the nation's unemployment offices. According to their calculations, up to 500,000 refugees are expected to join the labor force by 2020, and help grow the German economy, while some 350,000 would likely be without a job, and thus depend on some sort of government support.

No end of refugee crisis in sight, says head of OECD'S migration division

With no end of the refugee crisis on the horizon, a coordinated international response is needed. Jean-Christophe Dumont, the head of OECD’s migration division, says even the EU’s largest country can't solve it alone. (22.09.2015)