Refugee protests, solidarity in Freital | Germany| News and in-depth reporting from Berlin and beyond | DW | 24.06.2015

Emotions are running high in Freital after protests against housing asylum seekers erupted in the small Saxony town. Displays of solidarity are just as frank. 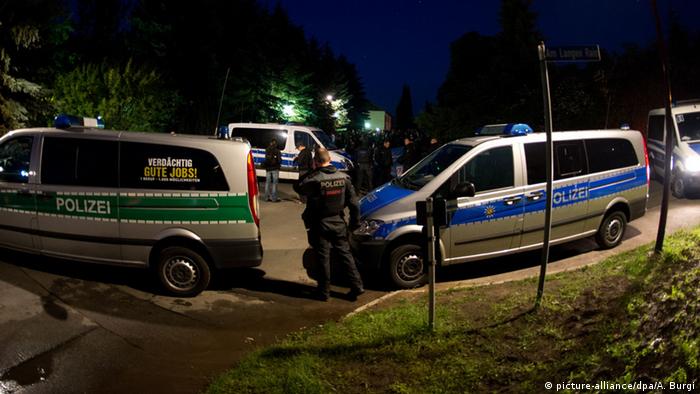 For weeks, anti-asylum protesters have been demonstrating against the refugee shelter in the small eastern German town of Freital.

Now authorities have decided to make room for up to 280 more asylum seekers in the former Hotel Leonardo that already houses about 100 refugees.

Authorities say that moving newcomers to Freital, which is situated on the southwestern outskirts of Dresden, will allow them to finally dismantle tents currently used to house asylum seekers in a central reception center in the city of Chemnitz.

About 200 people gathered in front of the former Hotel Leonardo on Tuesday, blocking access to the building. Some hurled eggs, according to police who separated anti-asylum protesters and citizens intent on expressing solidarity with refugees - both groups loudly insulting each other as "Nazis" and "leftist fascists." 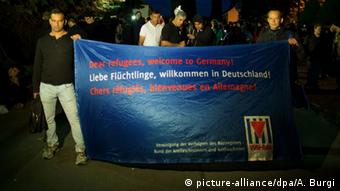 'Asylum is a difficult topic'

The atmosphere in the small town is clearly strained and people are becoming entrenched in their positions, he told DW. "Asylum is a difficult topic," he said, urging better and more transparent information policies for citizens, who often first hear about refugee housing in their neighborhood through the media.

Politicians have also voiced alarm, in particular at what one Social Democratic state politician called the anti-Muslim, anti-immigration PEGIDA movement's "cheap propaganda" in the small town.

Pegida founder Lutz Bachmann, who lives in Freital, on Facebook urged people to take to the streets: "Strike back!" The town is regarded as a stronghold of the self-proclaimed Patriotic Europeans Against the Islamization of the West (PEGIDA).

At the height of its popularity earlier this year, PEGIDA drew thousands of people to weekly marches in the eastern city of Dresden.

"They aren't anti-asylum, they aren't concern citizens, they are racists - call a spade a spade," wrote user Monika.

Jürgen thanked the counter-demonstrators "who peacefully showed solidarity and gathered to protect the shelter in Freital."

The protests at the shelter fizzled out in the early morning hours, but are expected to pick up again later Wednesday and Thursday.

The specter of xenophobia

Open hostility toward asylum seekers in some communities in Germany is a hotly debated issue. In the most recent incidents, arsonists in May set fire to housing being prepared for aslyum-seekers in the small western town of Limburgerhof.

And in April in the eastern town of Tröglitz, anti-foreigner sentiment had flared for weeks when arsonists torched a planned asylum shelter. By then, the town's mayor had already resigned, saying he had received no support from local authorities when racist thugs protested outside his family home against the opening of the shelter.

Germany continues to be the largest recipient of asylum seekers in Europe - more than 200,000 people applied for asylum in 2014. Some German states and municipalities say they have been struggling to cope. As the number of people fleeing war and poverty for Europe surges, many more are expected to request asylum this year.