After a blockade on aid entering Venezuela, the International Red Cross will be able to bring supplies into the country in two weeks. The announcement comes as Venezuela experiences its third major blackout in a month. 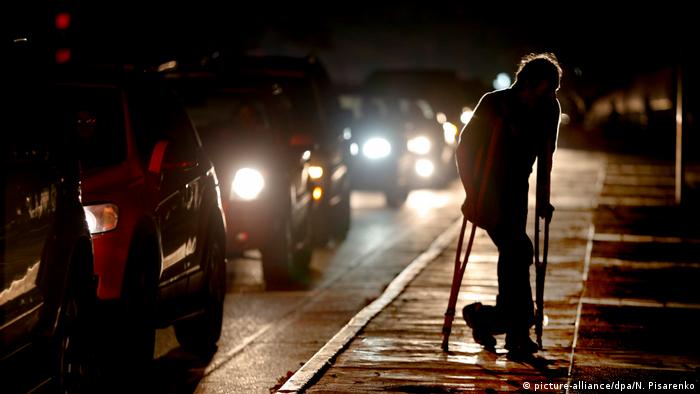 The Red Cross on Friday said it would begin distributing aid in Venezuela in two weeks' time, as President Nicolas Maduro and his opposition rival Juan Guaido continue to vie for power.

Following talks in the capital, Caracas, the head of the International Federation of the Red Cross and Red Crescent Societies, Francesco Rocca, said the organization would have "unhindered access to bring humanitarian aid into Venezuela."

The country's economic crisis has resulted in a rise in malnutrition and disease, and hundreds of thousands are in need of supplies.

"We estimate that in a period of approximately 15 days we will be ready to offer help," Rocca said.

The Red Cross hopes to reach 650,000 people initially and would act according to its principles of "impartiality, neutrality and independence," Rocca said, "without accepting interference from anyone."

Maduro had so far refused to allow aid supplies into the country, leaving them to stockpile for weeks on the Colombia and Brazil borders.

On Twitter, Guaido was quick to claim credit for the effort, saying the announcement amounted to a victory for "our struggle."

He also said medical aid would be coming into Venezuela in a matter of days, reiterating a promise that he was forced to renege on in February after security forces blocked US-backed assistance from entering the country and clashed with protesters.

Rocca told reporters in Caracas that among the aid supplies the Red Cross would be distributing were tons of mostly US food and medicine that had been sitting at the border.

The United States — which, along with some 50 other countries, considers Guaido interim president — welcomed the announcement as a "real opportunity."

Third major blackout in a month

The announcement comes as a third major blackout hit Caracas and other major Venezuelan cities on Friday.

The blackout began at around 7:10 p.m. (2310 UTC), leaving the capital and cities including Maracaibo, Valencia, Maracay and San Cristobal without electricity, according to users on social media networks.

It is the third time since March 7 that a major power outage has hit Venezuela, making living conditions even worse in a country that is already experiencing dire conditions.

Maduro has blamed the previous outages on sabotage, but experts have said that infrastructure breaking down from years of neglect is more likely to be the cause.