The opposition leader has embarked on a national tour under the banner "Operation Liberty" to rally support for widespread protest against acting President Nicolas Maduro. But government supporters aren't staying silent. 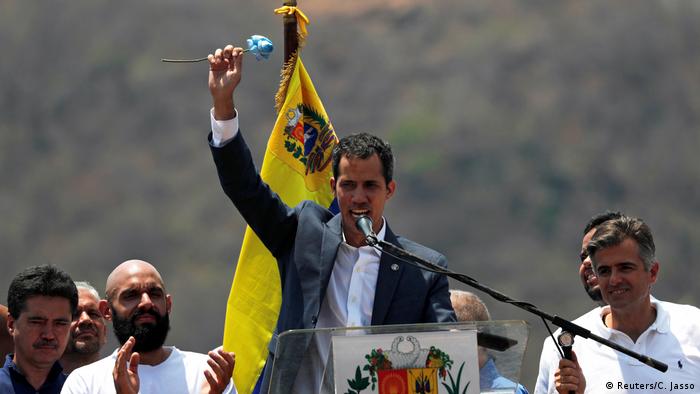 Venezuela's opposition leader, Juan Guaido, has kicked off a national tour, part of his ongoing attempt to oust acting President Nicolas Maduro from office and bolster support from a population struggling to secure basic necessities amid a political and economic crisis.

Guaido described his tour as a "new phase" of his opposition campaign, which he dubbed "Operation Liberty" ("Operacion Libertad").

On the first stop of his tour on Saturday, he spoke to large crowds in the northern city of Valencia, saying he would deliver a better life for Venezuelans.

"We're stronger than ever," he said, speaking from a podium draped with a Venezuelan flag. He warned that difficult challenges lie ahead, but his denunciations of Maduro drew cheers from the crowd. 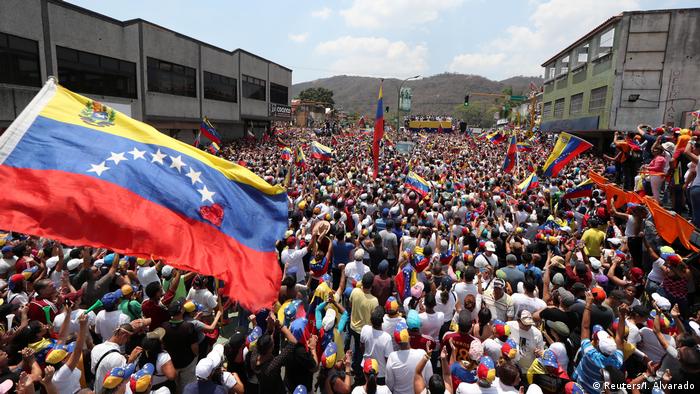 "Very soon, when we have visited and organized every inch ... we will go to Miraflores and reclaim what belongs to the Venezuelan people," he said, referring to the presidential palace.

Guaido tweeted a series of messages from the rally, where he repeatedly called for general organized street protests and for the Venezuelan military, which has thus far remained loyal to Maduro, to "protect the Venezuelan people."

Guaido, the leader of the opposition-controlled National Assembly, declared himself interim president in January, saying Maduro's election in late 2018 had been illegitimate.

Guaido had previously led anti-government protests that were largely focused on the capital, Caracas. He also recently toured Latin America in an attempt to consolidate international support for his efforts.

On Saturday, the Maduro government organized its own rally in Caracas, following an ongoing back-and-forth pattern. Many people took to the streets wearing red, the color associated with the socialist movement of Maduro's predecessor, Hugo Chavez.

He also denounced the US, which backs Guaido and which Maduro has accused of orchestrating a coup against his government.

The Maduro government has claimed the US was behind recent widespread power outages in Venezuela. Guaido attributed the blackouts to corruption and mismanagement among the ruling government. 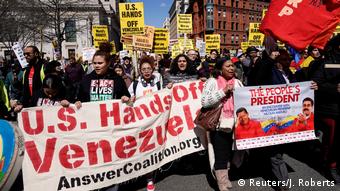 Meanwhile, in the US, people rallied in front of the White House on Saturday to protest what they have called US interference, chanting, "Hands off Venezuela!"

The US and other countries have pressured Maduro to call new elections, which he has thus far refused to do.

The US also delivered aid in late February to the Colombian border with Venezuela in an attempt to provide food and medicine to Venezuelans suffering from critical shortfalls, sparking a standoff.

As Venezuelans endured more power outages, police scuffled with protesters demonstrating against the government of Nicolas Maduro. Opposition leader Juan Guaido has called for people to take to the streets. (09.03.2019)

Billy Six has walked out of a Venezuelan prison, where he spent the past four months following accusations of spying. However, the German journalist must continue to report to authorities. (16.03.2019)

Venezuela's capital, Caracas, was reportedly left in total darkness for more than four hours as commuters headed home from work. Acting President Nicolas Maduro blamed the US of orchestrating the blackout. (08.03.2019)