Hungarian Prime Minister Viktor Orban has threatened to refuse EU coronavirus aid after the bloc moved against his laws. LGBTQ people expressed fear at the direction the country was going. Thousands of people took part in a gay pride parade in Budapest, Hungary

Record numbers of Hungarians took part in the annual Budapest Pride Saturday to protest against right-wing government attacks on LGBTQ rights that have drawn outrage from the European Union.

Organizers of the Pride march told protestors to stand up to the hatred of "power-hungry politicians" that were "using laws to make members of the LGBTQ community outcasts in their own country."

Hungarian Prime Minister Viktor Orban has even threatened to turn down EU coronavirus aid if it is dependent on him backtracking over his proposed laws against the LGBTQ community. Hungary is due to receive €7.2 billion ($8.4 billion) from the EU Recovery and Resilience Facility

What was the message from Budapest Pride?

The thousands of people who turned out for Budapest Pride were keen to show they would not be intimidated by the government's rhetoric and laws.

"The recent past has been very demanding, distressing and frightening for the LGBTQ community," its organizers said in a statement. LGBTQ marchers have slammed Victor Orban for his latest laws

"A lot of LGBTQ people don't feel like they have a place or a future in this country anymore," he added.

Mira Nagy, 16, told Associated Press said that as a member of the LGBTQ community her situation was "pretty bad" and "if things get worse, I will leave Hungary."

Earlier this week, over 40 foreign cultural institutions and embassies including the United States, Britain and Germany published a joint statement in support of the Budapest Pride Festival.

"Concerned by recent developments that threaten the principle of non-discrimination on grounds of sexual orientation or gender identity, we encourage steps in every country to ensure the equality and dignity of all human beings," they said. 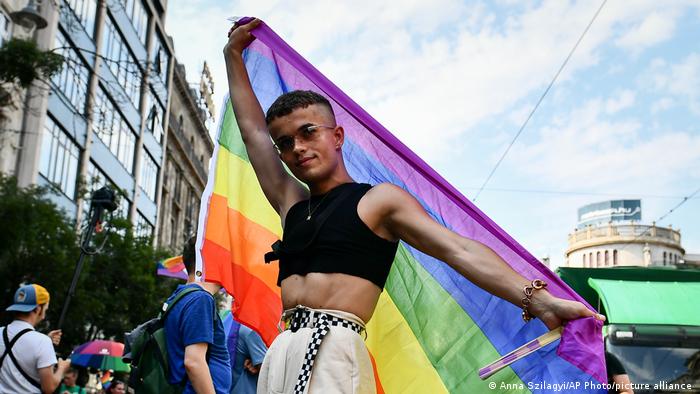 Last week,the European Commission launched legal action against Hungary for what it sees as discriminatory laws.

The new bill put limits on young people's access to information on LGBTQ rights and gender identities other than those assigned at birth. Orban has pledged a referendum on the law to get feedback from the public before elections next year.