The Bundesliga side is promoting diversity ahead of the Saxony elections. But its previous approach towards fans who publicly oppose discrimination, as well as the views held by Red Bull’s CEO, raise questions. 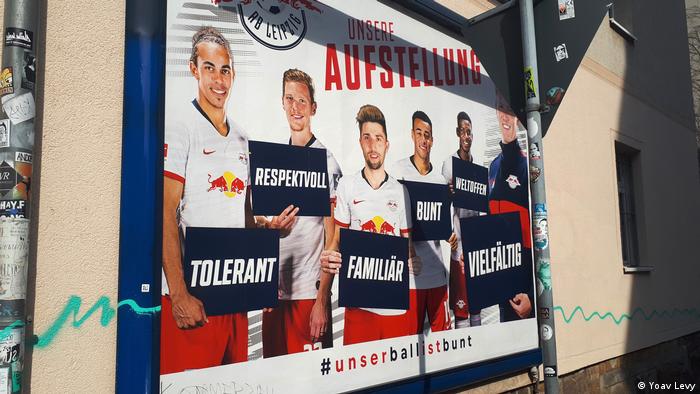 "Our ball is colorful" is the name of a new campaign from Bundesliga side RB Leipzig. In the accompanying poster, some of the Red Bull-backed club's players and coach Julian Nagelsmann are seen holding signs that carry the club's "Aufstellung," a word that means "lineup" or even "position." Among the messages: respectful, open to the world, diverse and tolerant. The posters were hung in some 300 locations across the eastern German state of Saxony.

The campaign's timing is hardly coincidental. Local parliament elections in Saxony are set to take place on Sunday, with the far-right Alternative for Germany (AfD) party expected to more than double its number of seats. Recent polls suggest the party will receive a vote share of between 20 and 25%, a huge increase on the 9.7% achieved in the 2015 elections. This would make them into the state's second-largest party after the conservative Christian Democratic Union (CDU).

In that context, the campaign carries a clear message concerning what club marketing director Florian Scholz calls "the values we stand for." Large parts of the club's active supporter scene have stood behind those exact values for several years. However, it hasn't always been plain sailing between RB Leipzig and its supporters.

Fan researcher Robert Claus told DW that the campaign makes clear use of diversity as a marketing instrument but it remains to be seen if it also operates and educates its personnel in accordance with the campaign's values. "I don't know if that's the case at RB Leipzig, but generally speaking in German football, there exists a big gap between the two [words and action]," he says.

The man behind the energy drink

In a 2017 interview with Austrian outlet Kleine Zeitung, Mateschitz strongly criticized both the German and the Austrian government for their policies during the 2015 refugee crisis. "None of the people that shout ‘refugees welcome' or ‘we can do it' [a quote from German Chancellor Angela Merkel] were preparing their own guest rooms to accommodate refugees," Mateschitz said back then. The Red Bull CEO, who's also Austria's richest person according to Forbes, also criticized the "so-called international elites” and political correctness, phrases often employed by populist politicians. 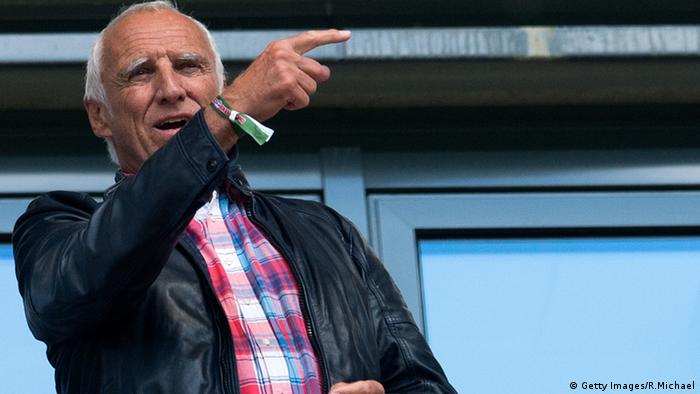 As Red Bull CEO, Mateschitz has media involvement in the form of Servus TV, an Austria-based channel owned by the Red Bull Media House. One of the station's shows became known in recent years for offering a platform to familiar names from the German-speaking world's far-right scene, such as Martin Sellner, the head of the Austrian Identitarian movement (also known as Generation Identity), whose German equivalent was recently announced an extreme right-wing group by security services, and Götz Kubitschek, a known German far-right activist.

According to a July 2019 report by Austrian outlet Der Standard, Servus TV's editor-in-chief now reports directly to Mateschitz rather than to the Red Bull Media House.

Mateschitz's views have had repercussions for Red Bull. Last year, several musicians and music venues from the German-speaking world decided to boycott the energy drink's 'Music Academy' event as a result of the Austrian's words. In addition to that, several high-profile potential interviewees have publicly rejected the chance to take part in Servus TV's shows in recent times due to the participation of far-right extremists.

Bejnamin Opratko, an academic who was invited to join a Servus TV panel with Kubitschek in April 2019, took to Twitter to post his refusal email. "[By inviting Kubitschek] you're actively contributing to making fascists and their murderous ideologies commonplace in our country," it read. Opratko said the channel had responded by saying they must allow both sides, left and right, to be represented in the discussion.

Mateschitz's interview with Kleine Zeitung also displeased several RB Leipzig supporter associations. Fan group Red Aces presented a message against Mateschitz during an away game at Schalke in April 2017. "The patron of the most authoritarian club calls himself a pluralist, what a joke," said the group's banner.

In a conversation with DW, a member of RB Leipzig fan group Rasenballisten who chose not to be named, explained the fans' rejection of the views. "It's not a secret that Mateschitz's worldview is populist, some would even say racist," he said, adding that it was important for the group to position itself against such views. 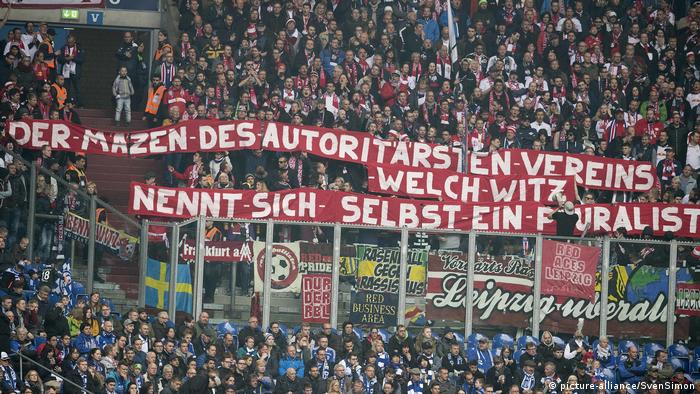 'No politics in the stadium'

It wasn't just Mateschitz that RB Leipzig's fans were unhappy with. According to a 2017 report by German outlet Die Zeit, there have been several clashes between the club and its fans on political grounds. One such incident saw a banner created by the fans in protest against far-right group LEGIDA blocked from entering the Red Bull Arena in 2015. Several fans received stadium banning orders on probation after attempting to display banners the club considered "party political." It is commonplace for fans in German stadiums to display banners with messages that would widely be regarded as political and face no punishment.

Some of RB's top figures have previously voiced strong opposition to their fans openly taking a political stance during the club's games. "We will not approve banners with political messages, that's not what a stadium and a football game are for," club CEO Oliver Mintzlaff said back in April 2017. 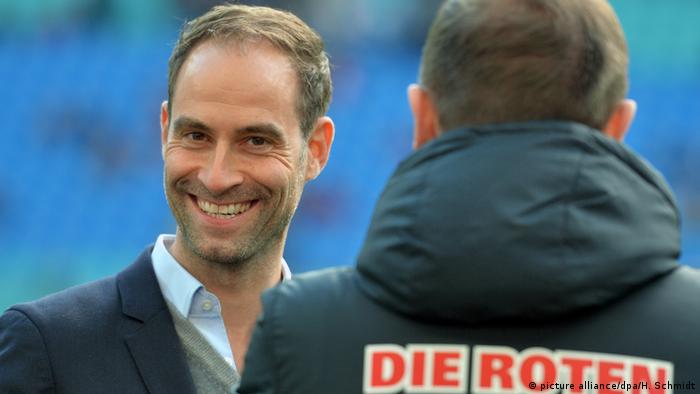 RB fan group Rasenballisten, known for displaying slogans in support of refugees and LGBT rights, as well as against discrimination were on the receiving end of some of the sanctions by the club. Having said that, they do see the current campaign in positive light. "It sends a signal to people that go to RB games and vote for far-right parties," the member DW spoke to said.

While Rasenballisten accept the situation has recently improved, it's hard for them to shake off the memories of the club's previous position. They see that as "absurd", adding that RB's fan groups have never urged anyone to vote for a specific party.

In the runup to the elections, Rasenballisten and other fan groups have called for the club's fans to go out and vote. Tim Tholke, RB's stadium announcer, has appealed for fans not to vote for the AfD. "A party that has something against Yussi (Poulsen), Dayot (Upamecano) and Ibrahima (Konate) is not electable for us," he wrote on his Facebook page.

'Step in the right direction'

While there's no evidence to suggest the Red Bull CEO has any direct say in setting RB Leipzig's agenda, Mateschitz's views have raised concerns in light of the position taken by RB in support of diversity. 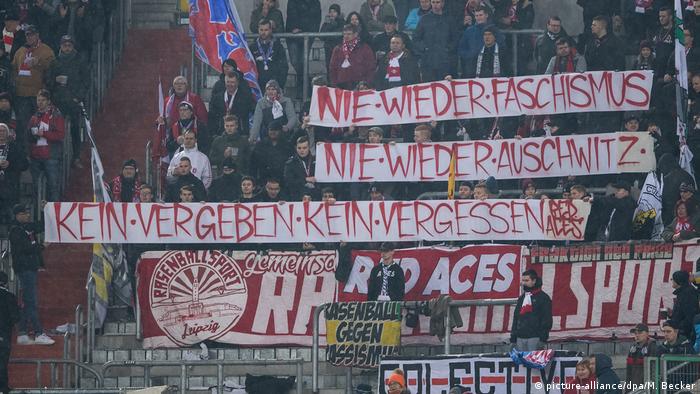 While Rasenballisten say they see the club's campaign as a "step in the right direction," there's still lots of work to be done.

"We have to wait and see how the elections pan out,” they said. "But we certainly hope that more and more clubs and fan groups open their mouths against the far right, including our own."

DW has approached RB Leipzig for comment on the issues raised in this article. The club's comment will be added to the article once it arrives.

The Red Bull-backed club's image is on the line after two fans were allegedly attacked by fellow RB Leipzig supporters in a "politically motivated" incident. The CEO has promised to crack down on fans who "don’t behave". (30.11.2017)