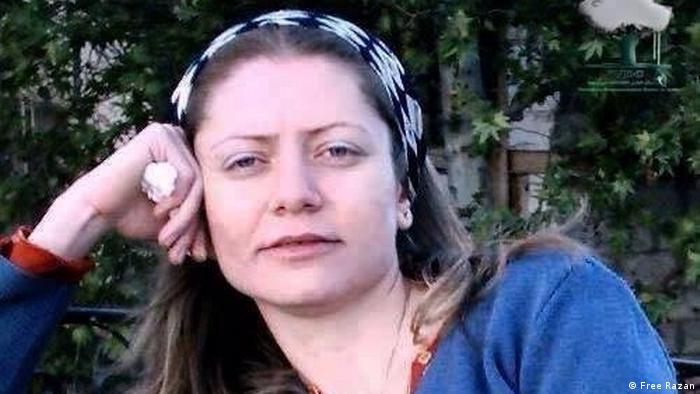 As a trained human rights lawyer, Zaitouneh fought for the rights of prisoners regardless of political orientation

Razan Zaitouneh was beaming as she swayed among the protesters. She was caught up in defiant revelry as she joined the crowds in chanting against the Syrian regime.

When the revolution kicked off, it was as if Zaitouneh had waited her entire life for it. She was among the first activists to call on the Syrian government to release political prisoners in an open letter published a day after the first major protests on March 15, 2011.

"We are facing one of the most brutal regimes in the region and the world with peaceful protests, songs of freedom — chanting for a new Syria," she said in a 2011 video statement. "I'm very proud to be Syrian, and to be part of these historical days, and to feel that greatness inside my people."

But that wasn't enough.

Back then, 33-year-old Zaitouneh became directly involved in organizing protests in Damascus and other cities across the country. Her efforts would contribute to the formation of the Local Coordination Committees, which were instrumental to early democratic efforts in Syria.

Her opposition to armed resistance set her apart from many of her contemporaries — some of whom would go on to support organized violence against the regime.

"The most important part of her personality is her rejection of injustice and her willingness to do anything to fight injustice," says Mazen Darwish, a longtime friend of Zaitouneh who leads the Syrian Center for Media and Freedom of Expression.

"Razan had no ambition for power," adds Darwish, his eyes bright from remembering her.

Even before she would spearhead revolutionary action in Syria, Zaitouneh championed the rights of the underserved, the marginal and those most at risk of the Assad regime's brutal security apparatus as a human rights lawyer.

"People's rights and treating them with justice is not something open to interpretation nor is it a point of view," Zaitouneh said in the last article she wrote before her disappearance. 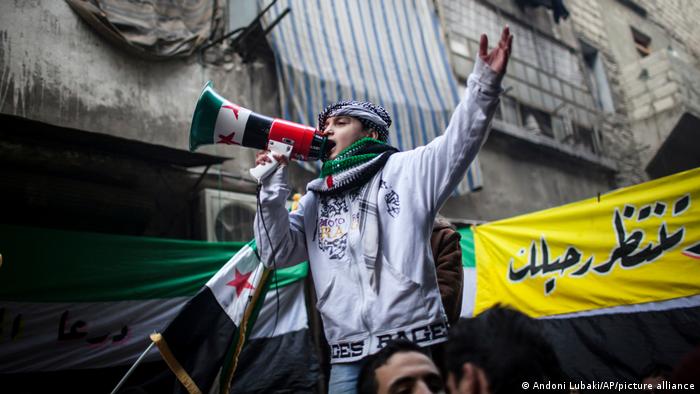 In one case during the mid-2000s, Syrian authorities had launched a targeted campaign against Salafists, the adherents of an ultra-conservative brand of Sunni Islam. It included jailing them for long periods of time on trumped-up charges.

It was a crackdown that no one was allowed to speak of, recalls Nadim Houry, director of the Arab Reform Initiative and also a friend of Zaitouneh.

"Razan at the time organized for me a clandestine meeting in her office with some of the mothers of these detainees," Houry tells DW. "She took an incredible risk for someone that she didn't know very well, but she wanted to get the story out and she was willing to put her life in danger to do so."

But the work Zaitouneh would become most recognized for was her documentation of human rights violations after the arrival of the Arab Spring.

In April 2011, only a month after protesters had taken to the streets against President Bashar Assad, the young lawyer co-founded the Violations Documentation Center (VDC), which continues to operate today.

But she eventually found that she could no longer work effectively in Damascus with Syria's secret police stalking her across the capital. In May 2011, her husband was arrested at their home and held for three months. As a result, she went into hiding for two years.

By April 2013, Zaitouneh had decided to flee for the rebel-held town of Douma on the outskirts of Damascus in the hope of continuing her work more freely. It would be her last known location.

The Assad File: The Attack in Eastern Ghouta

The VDC would go on to investigate war crimes, such as the August 2013 chemical weapons attack on Eastern Ghouta, which Zaitouneh documented with her colleague Thaer H. At least 1,000 people were killed in the attack, including more than 400 children, according to independent sources.

"I witnessed the massacre myself," Zaitouneh wrote then. "I saw the bodies of men, women and children in the streets. I heard the mothers screaming when they found the bodies of their children among the dead."

Her arrival in Douma was challenging. Zaitouneh and her colleagues quickly figured out that their presence in the area was not welcomed. It was largely because she had immediately started investigating abuses committed by armed rebel groups, including Islamist militants.

"We did not do a revolution and lose thousands of souls so that such monsters can come and repeat the same unjust history," Zaitouneh wrote Houry, who previously worked for Human Rights Watch, in an email dated May 2013. "These people need to be held to account just like the regime."

Throughout 2013, armed groups vied for power in Douma, including the likes of the "Islamic State," the Nusra Front and Jaish al-Islam (Arabic for Army of Islam). The latter would go on to assume vast control over the area by co-opting its competitors — or outright eliminating them. 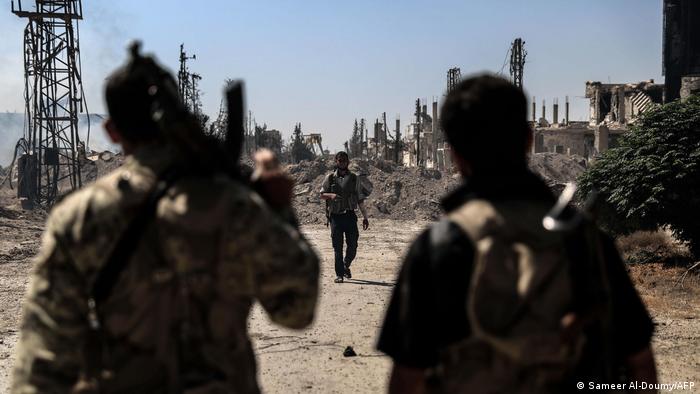 By summer, Zaitouneh was being targeted primarily for her work. But her refusal to wear a headscarf or adhere to conservative values also triggered hostile responses from some of the rebel groups.

In one instance, armed men shot into the air and left a bullet on her doorstep. In another, she received a threat letter, obtained by DW, in which the author wrote "I will kill you" five times.

DW spoke to multiple sources, who cannot be identified for security reasons, all of which said the letter was written by a member of Jaish al-Islam.

"She created initiatives for women, and started documenting violations, in prisons and elsewhere," says Thaer, her colleague at the VDC. "All this made her a competitor for Jaish al-Islam, its control, its ideology and its desire to establish an emirate or caliphate."

Gone without a trace

On December 9, 2013, armed men stormed her office in Douma. They abducted Zaitouneh, her husband Wael Hammada, fellow colleague Nazem Hammadi and Syrian activist Samira al-Khalil. They would become known as the "Douma Four" in the wake of their enforced disappearance.

A criminal complaint holding Jaish al-Islam responsible for the abduction was filed in France by the International Federation for Human Rights (FIDH) and the Syrian Center for Media and Freedom of Expression. DW was given exclusive access to their key findings.

The criminal complaint also alleged the militant group has committed crimes against humanity and tortured detainees. The group is not included in the UN's terror watch list.

The French war crimes unit in Paris confirmed to DW that it has launched a judicial investigation regarding the matter as a result. A senior member of Jaish al-Islam was arrested in Marseille last year after entering France on a student visa. The arrest was made in connection with the probe. 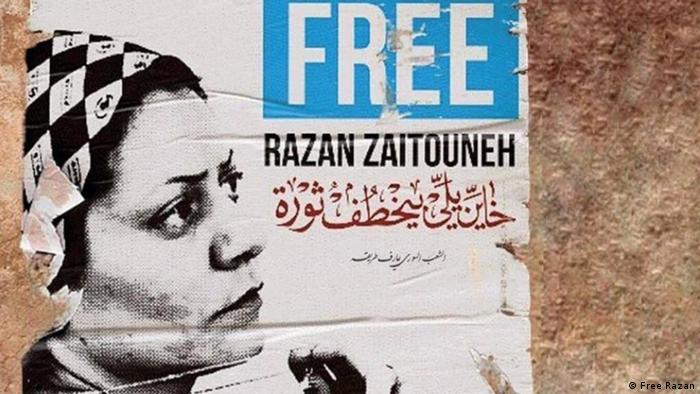 DW's investigative unit collected witness statements in Syria and Turkey that corroborate some of the findings at the heart of the criminal complaint. They strongly suggest that Zaitouneh was held at one point after her abduction by the militant Islamists.

When approached by DW, other high-ranking members of Jaish al-Islam rejected allegations of the group's involvement, saying the al-Qaeda-affiliated Nusra Front or the Assad regime were likely responsible. Assad's forces, supported by Russia, regained control of Douma in 2018.

The disappearance of Razan, her husband and colleagues remains one of the great unsolved mysteries of the Syrian revolution. For Mazen Darwish, who co-founded the VDC with Zaitouneh ten years ago, their absence is reminiscent of Syria's pro-democracy movement.

"The fate of Razan and her colleagues resembles that of the civil, peaceful movement that tried to create a moral alternative for Syria," says Darwish. "They were crushed between the regime and these [Islamist] groups – that in the end are authoritarian as well."

Editor's note: DW continues to investigate the disappearance of Razan Zaitouneh and her colleagues. If you have any information regarding their whereabouts or the circumstances of their abduction, please contact us securely at: DW.tips@protonmail.com