Thousands of pro-democracy protesters demonstrated in the Syrian capital, Damascus, on Friday where they clashed with government security forces. Demonstrations also continued in the cities of Banias and Deraa. 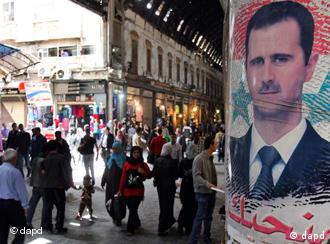 The Assad family has ruled Syria for decades

Pro-democracy street demonstrations reached the Syrian capital, Damascus, on Friday with thousands of protesters gathering in the city center after weekly Muslim prayers.

The Syrian secret police were heavily deployed throughout the capital, according to eyewitness accounts.

"I counted 15 mukhabarat (secret police) busloads," one eyewitness told the news agency Reuters. "They went into alleyways just north of the square chasing protesters yelling 'you pimps, you want freedom? We'll give it to you.'"

Rights activists reported protests in Deir al-Zor near the Iraqi border and in the Mediterranean coastal city of Banias as well as the southern city of Deraa. Rights groups claim at least 200 people have been killed since protests began in Deraa last month.

President Bashar al-Assad, who inherited the presidency from his father Hafez al-Assad over a decade ago, presented a new cabinet on Thursday and ordered the release of some detainees in a bid to satisfy the protesters' demands.

However, emergency rule - now in place for nearly five decades - remains the law of the land. 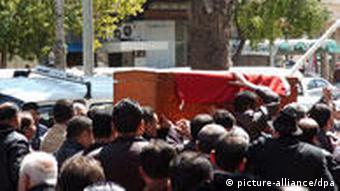 Rights groups say scores have died from the unrest in Syria

US Secretary of State Hillary Clinton called on the Assad regime to stop its crackdown on the protesters.

"We call on the Syrian authorities once again to refrain from any further violence against their people," Clinton told reporters in Berlin after the NATO foreign ministers meeting Friday.

An unclear liaison: The United States and Syria

While NATO continues its mission to protect Libyan civilians, protesters in Syria are left to their own devices. Critics say the US is missing a trick to come between Damascus and Teheran. (07.04.2011)