A German hostage in the Philippines says Islamists have threatened to execute him on Friday if his ransom of over 4 million euros isn't paid. The man was captured with his wife in the western Pacific in April. 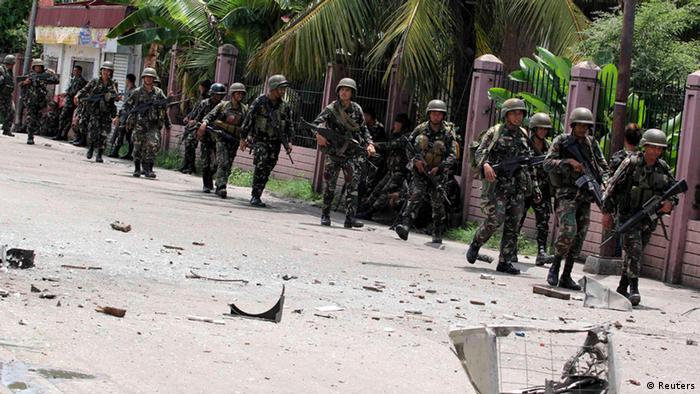 Stefan Okonek, aged 74, told a local radio station on Wednesday that his captors had pushed him into a hole in the jungle on Jolo Island, 1,000 kilometers south of Manila, ahead of a Friday deadline for his ransom payment.

"I am sitting here in a hole, a deep hole," the doctor told DXRZ, a radio station in nearby Zamboanga City. "They told me this is my grave. They pushed me inside this hole and I am sitting here with 10 men since last night, " Okonek said, referring to guards watching over him.

Okonek has been separated from his wife, 55-year-old Henrike Dielen, since Monday.

"I hope I will still get out from here ... but I have not seen anyone from the government to get into the situation that tries to get us out."

The couple was abducted in April when their yacht broke down in the western Pacific off the coast of Borneo Island and the Philippine province of Palawan.

The militant group, which calls itself Abu Sayyaf, has demanded $5.6 million (4.4 million euros) in ransom and for Berlin to withdraw its support for the US air campaign against the "Islamic State" jihadist group in Syria and Iraq.

A spokesman for Abu Sayyaf has said the group is set to behead Okonek on October 17 - at 3pm local time (7am GMT) - if its demands were not met.

The Philippine military said it was checking on the authenticity of statements attributed to Okonek.

Last week, the Philippine military deployed a team of 100 soldiers from the army's Special Operations Command and a canine unit in a bid to track and contain the militants.

"We want to pressure them to eventually release the hostages," military spokesman Lt. Col. Harold Cabunoc said. "If they're free to roam everywhere, they dictate the tempo. We must be the one dictating the tempo."

Philippine officials have said they will not intervene in the negotiation process. Cabunoc said government forces would not take any step that would endanger the captives.

The German Foreign Ministry said it had formed a crisis team and was in touch with Philippine authorities.

Berlin has refused to provide more details in line with a federal government policy of not discussing information on kidnapping cases.

German hostages in the Philippines plead for release

Two Germans held captive by Islamist militants in the southern Philippines have appealed to authorities to secure their release. Their captors have threatened to kill them if their demands are not met. (29.09.2014)

Growing concern for two German hostages in the Philippines

Following the murder of a French hostage in Algeria, there is growing concern about the fate of two Germans kidnapped in the Philippines. Assessing the real extent of the risk is extremely complex. (25.09.2014)

As the Philippines refuses to negotiate with Abu Sayyaf militants demanding ransom for two German hostages held captive since April, analyst Joseph Franco talks to DW about why the kill threat should be taken seriously. (25.09.2014)