'Race' has no place in the German constitution — or does it?

At a time of widespread international protests against racism, triggered by the killing of George Floyd in the US, there are calls to remove the term race from the German Constitution. But not everyone agrees. 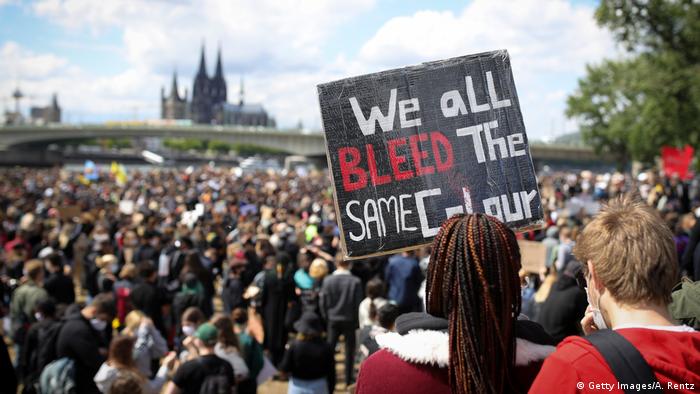 Following the anti-racism protests triggered by the police killing of George Floyd in the US, two German Green party politicians called for this paragraph of the constitution to be changed.

"The word race should be removed from the Basic Law (Germany's Constitution). There is no such thing as race, there are only people," wrote Green co-chair Robert Habeck and party vice-president for the state of Schleswig-Holstein Aminata Touré in the German daily Tageszeitung. They refrained from suggesting an alternative word or an exact alteration.

The word "Rasse" in German, rendered as "race" in the official translation of German law, is described in the German Duden dictionary as dated and potentially discriminatory. The term also translates to "breed," used for animals.

Green party co-chair Annalena Baerbock told DW: "' All people are equal before the law' is the first article of our constitution, and Article 3 in its current form undermines this. I think striking the word 'race' is an essential step."

On Friday, Justice Minister Christine Lambrecht from the Social Democrat SPD said she basically agreed with that demand.

Read more: EU has a racism problem, too

The term race is outdated and is in itself perceived as racist, says Hendrik Cremer from Germany's independent Human Rights Institute. "This term irritates people, makes them speechless, is seen as hurtful," he says.

The term goes back to colonialism in the 18th century, he explains.

And under the rule of National Socialists (Nazis) in Germany in the 1930s and 40s, the racist ideology "resulted in monstrous crimes against humanity," he told DW in an interview.

Are there different human races?

Researchers at Jena University published a paper last year stating that a division into "races" on the basis of skin color, eye color, or the shape of the skull was what led to persecution, enslavement and the killing of millions of people. The academics state clearly that there are no different human races in a biological sense.

The concept of different human races is in itself a result of racism, not its prerequisite," they write in the "Jena Declaration."

Indeed, anthropological genetics has shown that the division of humankind into smaller, discrete categories based on particular physical characteristics is not really possible: Down to a molecular level, there are so few differences between populations that humans cannot actually be divided into discrete "races," because most genetic traits instead vary on a continuous basis and human biology is very homogeneous compared to the greater genetic variation in other closely related species like apes.

Politicians from across Germany's political spectrum are taking part in the current debate. The far-right Alternative for Germany (AfD) definitely wants the term to stay. Conservatives within Angela Merkel's ruling Christian Democratic Union (CDU) and its Bavarian sister party, the Christian Social Union (CSU), are skeptical about changing the Constitution. Thorsten Frei of the CDU agrees that the Constitution should be modified where it is out of date, but he cautions that "we have to fight racism in our society," and questions whether the removal of Article 3 would have a real impact.

It's not easy to change the Basic Law

"Our constitution quite clearly condemns racism," argues Marko Buschmann from the liberal Free Democrats (FDP). "But it needs even clearer language." The socialist Left party points out that it first put forward a motion to remove the term ten years ago. "Only racists believe there are different human races," Left Party MP Jan Korte said in a DW interview.

Johannes Fechner, the legal affairs spokesman for the co-ruling Social Democrats (SPD), has demanded that the term be removed also from Germany's criminal code and the Anti-Discrimination Act.

The small city-state of Bremen has led the way and removed the term "race" from its local Constitution and replaced it with "racial discrimination." The local SPD, the Greens, and the Left party had joined forces, arguing that Germany carried the burden of its Nazi history and should be especially careful with such wordings. Other states have also modified their respective legal documents.

Other European countries including France, Finland, or Sweden removed the term race long ago, says Cremer.

Changing the constitution is not easy: It requires a two-thirds majority in both houses of parliament. This may be difficult to achieve.

"Ethnic identity" is the term that Bundestag parliamentarian Karamba Diaby, who is black, has proposed to replace the term "race." But, he says, the discussion has only just begun.

You can find more stories on Germany here.

In a personal essay, DW's Beina Xu reflects on a coronavirus-related racist attack and confronts Germany's — and Europe's — deeply problematic idea of race. (13.06.2020)

A review of the history of 'race' concepts