The Federal Republic of Germany is a federal state with a free and democratic basic order, founded in 1949. The values that are now firmly anchored in the Basic Law - the German constitution - came at a high price. 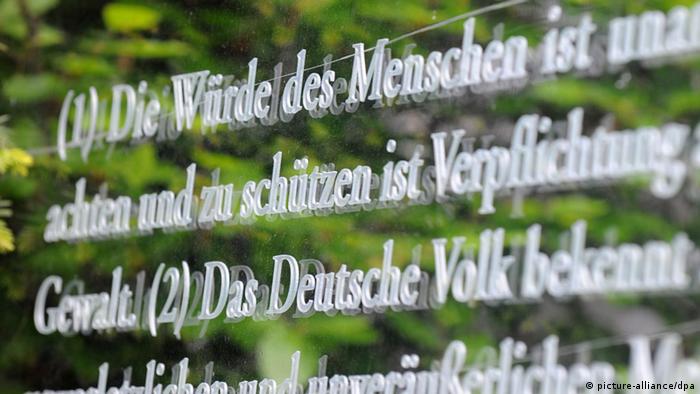 The German constitution, known as the Grundgesetz or Basic Law, protects the freedom of individuals, guarantees their dignity and ensures that all people are treated equally before the law - no matter what their race, origin, language or religion. It also subjects state power to strict controls through the separation of powers - to prevent a dictator from ever seizing power in Germany again.

With the Basic Law, Germany learned its lessons from the catastrophe of the Third Reich, the Nazi dictatorship under Adolf Hitler from 1933 to 1945. Tens of millions of people died in World War II, in which Germany was an aggressor. Six million Jews were murdered in the Holocaust.

After 1945, democracy returned to Germany, at least in the west of the country. There, the Basic Law was adopted in 1949. It was intended to serve as a transitional constitution, until Germany could be reunited.

The validity of the Basic Law extended first to what had been the American, British and French zones of occupation in the West. The Soviet occupation zone in the east of the country became the communist German Democratic Republic (GDR, usually known as East Germany), which was also founded in 1949. East Germans were denied many basic freedoms, among them the ability to travel to the West.

After the Berlin Wall fell, East Germany voted to join the Federal Republic of Germany. Germany was reunified on October 3, 1990 - and the transitional Basic Law became the first all-German constitution. It forms the basis for the liberal-democratic order in Germany.

The Basic Law establishes a federal state with three levels of government. The federal and state governments share political power. The 16 states transfer central competencies to the federal government, but have a say in its legislation. In other areas, the states have legislative autonomy. The municipalities are the third, lowest level.

The constitution sets up barriers to radical, undemocratic tendencies. The Federal Republic has the power to ban unconstitutional parties - and used it to shut down the neo-Nazi Socialist Reich Party (SRP) in 1952 and the German Communist Party (KPD) four years later.

Furthermore, not every party can get into parliament: Only those that overcome the constitutional 5-percent threshold in an election are allowed to take seats. This rule is intended to give the Bundestag stability.

Another institution keeps an eye on power sharing, fundamental rights and democracy - the Federal Constitutional Court. Its main duty is the judicial review - examining laws for their constitutionality, and thus helping all citizens to enforce their rights and freedoms against the state.

The German court is a unique defender of the Basic Law, and it has been copied around the world. One example is Spain, where a similar court was also enshrined in the constitution.

Political parties articulate social conflicts and mobilize citizens to vote in national and state elections in Germany. Two major parties have emerged: the conservative CDU/CSU and the social democratic SPD.

However, other political currents are represented either in the Bundestag or the state legislatures: Voters can choose from free-market liberals (FDP); environmentalist Greens; as well as the Left party, successor to the East German communists; and the euroskeptic Alternative for Germany (AfD).

Similarly, the political system addresses social matters through associations, trade unions and interest groups. Any citizen can get involved in them.