In comments interpreted as a message on Brexit, the British monarch praised compromise and civility on different views. UK politicians are locked in a bitter row about leaving the EU, and time is running out. 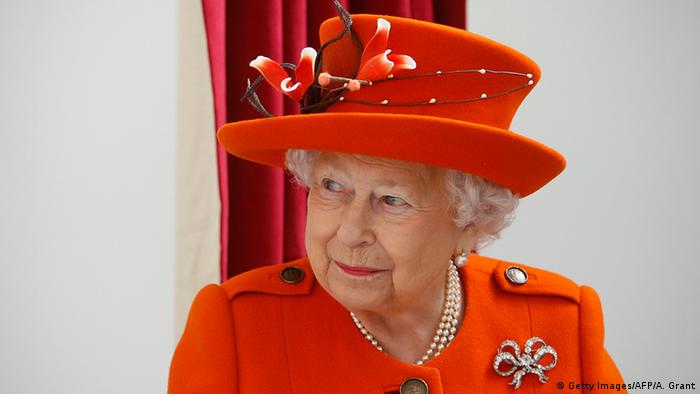 Using carefully weighed words, Britain's Queen Elizabeth II drew attention to the bitter tone of the Brexit debate by urging respect and compromise from politicians. Her statements came at a moment of deep political crisis in the UK as the London government struggles to find a compromise that would keep it from crashing out of the EU on March 29.

Speaking to the local Women's Institute in Norfolk, the 92-year-old monarch said, "Every generation faces fresh challenges and opportunities."

"As we look for new answers in the modern age, I for one prefer the tried and tested recipes, like speaking well of each other and respecting different points of view; coming together to seek out the common ground; and never losing sight of the bigger picture," the queen said.

"To me, these approaches are timeless, and I commend them to everyone," she added.

While the queen's remarks remain broadly in line with the expectation that the monarch remain publically neutral on political matters, the British press interpreted the speech as a message to lawmakers and Prime Minister Theresa May's Cabinet.

The prime minister recently suffered a bitter defeat with lawmakers rejecting her Brexit deal and is now struggling to gather support for an updated version of the plan. If she fails, there is a strong possibility that UK will leave the EU without a divorce deal, which could prompt a major hit on the nation's economy and disrupt daily life in a whole range of issues, from food and medicine supply chains to air traffic.

May faces pressure from politicians and voters who are in favor of staying in the EU. She is also under attack by hard-liners from her own Tory party who reject the deal, as well as an increasingly vocal segment of Tory voters that believes no concessions to the EU are warranted and are willing to risk a "no-deal" Brexit. The polarizing debate has consumed public and political life in Britain since the Brexit referendum campaigns began in April 2016.

Quadriga - The Queen in Germany - Don’t mention the Brexit

Quadriga - The Queen in Germany - Don’t mention the Brexit

Just a hat or a coded message?

With the politicians at an apparent impasse, some voices in Britain have called on the queen to step in and use her influence to resolve the crisis. However, the monarch has held to the expectation of political neutrality and refused to take sides.

In theory, the queen still wields enormous powers as the head of the UK state, Church of England, and military. In practice, however, Queen Elizabeth II has steadily worked to extricate the royal family from day-to-day politics during her 67-year reign.

Read more: What does the EU want from Brexit?

The British press has kept a keen eye for any signal from the monarch during the Brexit crisis. In 2017, reporters noted that she wore a blue hat with yellow and blue petals while giving a speech to open the Parliament. Officials in London and Brussels, including the European Parliament's Brexit negotiator, Guy Verhofstadt, also noted the hat's likeness to the EU flag.

"Clearly the EU still inspires some in the UK," Verhofstadt tweeted.

"Even with the most deeply held differences, treating the other person with respect and as a fellow human being is always a good first step towards greater understanding," she said.

The comments from Mark Francois came after Airbus CEO Tom Enders urged lawmakers to avoid a no-deal Brexit. Taking aim at Enders, Francois referenced D-Day and said he wouldn't submit to "bullying by any German." (26.01.2019)